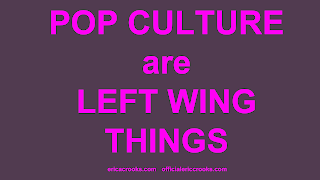 “Art should disturb the comfortable and comfort the disturbed." -Unknown”
“ All art is propaganda “ _ George Orwell
“ If you want to really change the world , do it subtly so the establishment can’t attack ( i.e. Theater in Court , In Bed Events , Two Virgins , things like that. ) Things that the establishment won’t understand therefore they can’t kill it. “ _ John Lennon ( Dick Cavett Show appearance )

There’s a pattern I have most certainly noticed between pop culture and politics .
Most people involved in pop culture are liberal or leftist . To see this pattern as a whole is pretty obvious as everything sides with left wing.
So whenever I hear things regarding Right Wing supporting Looney Tunes fans ( maybe these kinds of fans cheer on the villains and hate the screwballs ) , Muppet Fans ( mentioned or even hinted by ToughPigs which to my observation sides with liberal http://www.toughpigs.com/happytime-war/ and http://www.toughpigs.com/trump-anti-henson/ ) ,

South Park Fans ( Ok not so much surprising due to the South Park Conservative books and how the show in recent years went from sort of a punk edge to it to just plain left wing bashing aka PC Principle . But then again Trey Parker and Matt Stone are ( right wing ) Libertarians or they claim that’s the closest thing to their ideology despite the fact that the Anarchist flag was shown in The South Park Movie . )

And even Ed Edd n Eddy fans ( They don’t know or care that Danny Autonucci said F**K America https://www.youtube.com/watch?v=_Ns5RPHQigg  or THE FACT Ed Edd n Eddy animator Paul Boyd
Was MURDERED by Police ! Yes he suffered with bipolar disorder but he was loved by his fans , the AKA Cartoon inc team , and his family. In other words , it doesn’t seem like he was a John Kricfalusi in anyway. Even Danny Autonucci reached out to the press regarding what happened mentioning just that , his crew and family supported him and he was disgusted by the police. )

In recent times I was re-educated learning the fact that republicans / democrats , conservatives / liberals are basically faux versions of leftists and fascism to keep people obedient to the hierarchy of Government control.
( I’m a Libertarian Socialist Anarchism / Anarcho-Communist by the way )

And the very reason why I bring up this article in the first place is that pop culture pretty much introduced me to politics at a very early age. Perhaps it did with everyone.
But then again maybe there’s two kinds of people.
Those who get the messages and those who just see it as entertainment fun and that’s it.

Is it possible that *NFP types show the most healthy type of people ?
Where sensors is due to being taught to see and accept the world for what it is in the here and now , and NTJ / ST types are taught to see authoritarian values with such reverence ?

Like I said , all it takes is a little bit of research and it’s clear as day that such art and the artists themselves are left wing.

I can go on in detail but sometimes art and even artists need to speak for themselves.