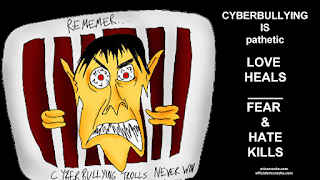 In 2009 my life’s environment flipped upside down which was caused by 4 right wing sick bullies in my life. A man who was my job coach and his friend , my father and his wife.
In 2013 / 2014 , I written a book about my experience and how I decided to forgive and let go.
https://www.officialericcrooks.com/adults-get-bullied-too.html

Will that stop me from being bullied ? No.
But 10 years later , I’ve became a more self aware confident person.
The stronger you are on the inside , the more such narcissistic hovering and gaslighting technics won’t harm me. But of course I’m going to feel and tell the difference between
Someone pretending to be a good person vs some right wing jerk who’s involved in crime and laughs along with other sad , miserable people on sites such as 4chan with the negative untruthful perception of love is weak. With their Ego , they can protect themselves from the power of love. Just kidding , they won’t survive. They’ll eventually break down in tears and frown in the mirror and seek out a therapist. Or at least we hope they will otherwise , their Karma will catch up with them because they attract what they think and feel about.

Allow me to introduce a blog video that’s most certainly going to attract more thumbs down than a happy smiley face .
https://www.youtube.com/watch?v=o_cqbyGk_zI
Why ? Simple. They live in fear !

A bully example is seeing a happy child building a sand castle. And here comes this angry middle aged adult to come by and kick it over. The kid cries and the parents get angry , pack up their things and gets ready to leave the beach. That is if they bully doesn’t get arrested.
Here’s an interesting question to ponder . What was that all about ? What’s the point ? What’s the motivation ?
A senseless anti-social action caused by the bully to make himself feel better perhaps.
If they bully isn’t loved then no one should be.
Perhaps seeing a happy child with happy parents trigger’s this man’s jealousy that he never had such a kind and caring family.
Perhaps this very awareness is clouded in the mind of the bully. The evil deed is done , what’s next for ego based destruction ?

How about another example.
Two siblings , roughly around the same age. One slightly older , the other slightly younger.
One gets more love , attention , toys than the other. The other feels abandon.
So that would probably cause that one to bully the other one.
“ MOM liked you best ! Nobody knows how I feel. Maybe you can. TAKE THAT ! AND THAT ! “
Breaks the toys of the other sibling , beats them up , eventually the angry sibling gets punished.

It’s psychology 101 people , childhood !
And we all have stories like this. Some tend to be submissive while others more aggressive.
Perhaps this article explains things further. If parents were intentional or not !
http://anarchism.pageabode.com/afaq/secB1.html#secb15

And depending on how authoritarian the parents were and towards the child and how much psychological damage was done , is going to result to how the adult will end up being in adulthood.
No wonder Anarchists and New Age Spiritual people talk about this.
If it’s the anarchist chapter example above or clearing your karma and cleaning your chakras to release blockages and negative energy past and present ,
Fear is something in life we can do without !

A couple of nights ago , I started and educational youtube playlist which is a collection of recommendations for research and educational purposes
https://www.youtube.com/watch?v=ExTl-Je6FDA&list=PLJLbzpbdP5rnW68BVb_n3w-RUtk74utQr

How the easy solution to getting rid of cyberbullies , fascists , EVIL is through their weakness which is love. Perhaps it’s best to do it from a distance because these kinds of sick people tend to take advantage of good people.

Allow me to recommend one of my all time favorite Teal Swan videos relating to this.
https://www.youtube.com/watch?v=FWM-92ripck

So what is the solution ?

( 2. Sending love spiritually which can bypass any ego with the help of spirit guides and
If that doesn’t help fully then they will be left behind and depending on the energy of planet earth will depending on how much reincarnation of dark entities there will be.
https://www.youtube.com/watch?v=xom850h0drA
https://in5d.com/5d-earth-will-some-people-get-left-behind/

So is there really a solution ? A fast fix ?
Probably not a fast fix. Anarchism would likely be the best choice of action in terms of politics .
Law of Attraction love for ourselves and forgiveness of others will not effect good things happening to the individual’s life but work as a collective.

When it comes to Anarchism and a full external 5D Earth ,
That’s going to depend on how many people are positively effected by love and how much they find such unity important.
https://in5d.com/are-you-ready-to-go-home-to-5d-earth/
https://www.youtube.com/watch?v=gnuOM1Jy6qQ

But the thing about 5D is that in the meantime we can tap into 5D consciousness anytime we want , we don’t need to wait for others.
Same goes with Twin Flame Union.

Perhaps learning to trust the fact that good people exist is something for the victim of narcissistic supply to learn more and more and more as life goes on. Me included.
I like what this lightworker has to say regarding lightworker mission.
https://www.youtube.com/watch?v=lIYdDWvsXE4

So in conclusion , the unfortunate thing is
Perhaps there’s more bullies in life than I originally thought before my Spiritual Awakening and getting into Anarchism.

But one thing is for sure.
It won’t be allowed in an Anarchist Society.
http://anarchism.pageabode.com/afaq/secI5.html#seci58

And this is why ANTIFA exists !

I understand the motives of ANTIFA and Black Bloc , but perhaps this wisdom is wiser.

ANTIFA is a defense group not much different than Karate .
How interesting that people can accept Karate positively and not ANTIFA !

But hopefully someday we will live in a world where there isn’t violence.
And no voting does not help !

It’s all a product of hierarchical systems
Such as capitalism.

If dark entities existed before the human earth experience , then love would be the antidote  one way or another.

Posted by Erica Crooks at 10:30 PM No comments: