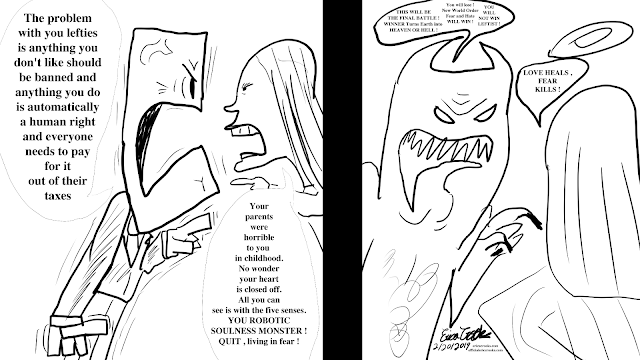 Hello.
Before I start this article , I’d like to introduce myself.
My name is Erica Crooks. ( Pronouns : She / Her )
MBTI ( Myers Briggs Personality Type ) : INFP
Astrology / Zodiac : Pieces
Numerology : Personality Number 9 / Life Path & Soul Urge : 5
Lightworker , Twin Flame ( I’m a Trans Lesbian Woman and my Twin is a Cisgender Butch Stud Lesbian )
Heyoka Empath ( Mirror Empath / Sacred Clown ) , Starseed , Old Soul , Indigo / Crystal , etc ( Anytime I see articles regarding “ Signs your a “ I often can relate to them so… )

The reason why I wanted to introduce myself in such great detail is to point out that even though I’m a minority , perhaps a minority of minorities , I’m a good person.

And perhaps that’s how I’d like to set the mood on this article.

Through out all of human history , people know of the concept of “ Good vs Evil “ .
Some feel indifferent about it . I however figured out that Good vs Evil can be translated in two different ways. Soul vs Ego and Love vs Fear .
And of course how to determine who’s good or evil is simply listening to your heart.
But perhaps sometimes that can be easily said than done since I’ve had a long history of being the kind and caring empath who is often taken advantage of by narcissists , sociopaths , psychopaths , dark triad , sadistic , fascist bullies.

One of the most valuable lessons I’ve learned in life is that “ We fear what we do not understand. Once we understand something , the fear goes away. “
One of the things about me is I tend to see how things connect . The way I think is kind of like a puzzle. I don’t see the individual pieces , I see how they all connect to one big picture.

When I was growing up to become an adult , I was shocked seeing the dysfunctional adult world for the first time and I thought “ What is this huge mess called society ? How come I never knew about this ? What is this mess and how come people aren’t cleaning it up ? “
But maybe that’s just the story of my life. For me I don’t feel like I made a bunch of choices just because it was available to me. I always listen to my self be true and what feels right to me , at the same time I often felt like I was spiritually guided and continue to be. And when I do , I tend to me more of life which most people don’t. If was be becoming a satirist multi-talented indie filmmaker , came out of the closet , my Twin Flame experience , knowing I’m different from most people around me , Anarchism , spiritual awakening , what The New World Order was , etc.

In this article , I’m going to connect the dots of my discovery through my research.
Now most people only see things individually and subjectively. For me I see the big picture , I see the forest and not the individual trees .

When you’re kid , how would you define Good vs Evil ? One aspect is from television and movies. Perhaps toys that promote “ Divide and Conquer “ . Perhaps you went to Sunday school and they taught you all about Heaven and Hell. Everyone’s upbringing is different.
Some parents are more open minded than others.
But one thing is for sure.
Love is something that comes natural , fear and hate is taught !
I’ve read about the subject of the Authoritarian Personality in which parenting is as strict as
It comes. But perhaps this is a great link to certain kinds of people that are considered evil.
However when you are within such a circle , you might not think so.
That’s a pinpoint I’d like to make right there. Love is simple , love is free and liberating.
Fear is a control freak and it’s very complex in it’s systems of control.

Listening to what feels right in your heart is of course known as empathy , it’s known as intuition , etc. However such Authoritarian upbringing could NUM that.

What’s very interesting is how Right Wing people tend to hop on the idea of The New World Order but you know what ? As Above , So Below . Whenever someone does something wonderful for the good of humanity , right wing feel strong motivated to counter protest against anything that’s love , equality , all things good.

I think most people are ignorant in terms of political knowledge. Ignorant doesn’t necessarily mean stupid , but lack of knowledge. And when there’s lack of a good thing , it needs it’s fill .

Take a look at in black and white , forest instead of the trees , BIG PICTURE here.

LEFT ( Cares about people , animals , for the good of human kind and liberate against evil )

RIGHT ( IS An evil cult in which they want fascism to take over the world. All supporters are brainwashed robotic zombies due to “ Authoritarian Parenting “ . Also I strongly believe Right Wing politics like Black Magick is responsible for The New World Order. They expose pretty much everything about themselves and feel comfortable exposing it all to people. But just like any sociopaths , psychopaths , narcissists , dark triad , sadists , psychic / energetic vampires , malevolent dark entities , etc —— They are going to blame it on the empath , the victim , the kind caring one ! )

Most people already know this pattern.

But it’s just like Westboro Baptist Church . Louis Theroux could try to reason with them on how Hate and Fear hurts people and they won’t listen to him.

Most people dislike right wing politics , or at least I like to believe it’s “ Most “ if that’s necessarily true then that means the world is slowly becoming a better place. To me Right Wing is the most evil people in the world. Just studying their history on wikipedia pure and simple and it’s shows. They always blame the left. It’s like a heartless bully doing everything in their power to lie that their neighbor’s dog is a vicious monster even though the dog is innocent , and these bullies will not rest until the dog is put to sleep , get as many supporters to kiss their butt and side with them and if they win , that gives them the narcissistic supply they need and they go off and do the same to someone else.

In other words , if someone can recognize a narcissistic relationship to the point of leaving and dropping all connections with them , then why not the greedy capitalists in power of all hierarchies which hurt people.

( 1. Don’t let anyone take your sunshine away EVER !
( 2. Stand your ground if someone is disrespectful to you and refuses to talk like a mature adult
( 3. Forgive from a distance and know in a 5D Earth , such jerks would be left behind. And the more you master Law of Attraction the better . ( As mentioned on in5d.com )
( 4. Stand up for not only you but ALL GOOD people. To me that’s what Libertarian Socialist Anarchism / Anarcho-Communism is all about . That and 5D Earth , You can’t go any further left then that. Left feels good and right ! Right is a hateful cult ran by devils in human’s skin.

Make sure to keep safe !
Never stop being you ! :)

Check out my links and stuff for educational resources

Posted by Erica Crooks at 9:56 PM No comments: