Posted by Erica Crooks at 1:52 PM No comments:

Posted by Erica Crooks at 1:50 PM No comments:

What is Anarchist ? What is Antifa ? ( Intro For Liberals )

What does Anarchist mean ?

What does Antifa mean ?

As Anarchists / Antifa becomes more and more recognizable in the news, I can see demonization of the two happening not just from Trump and Mainstream News, but unfortunately ANYONE who misunderstands these political ideologies.

There is a lot of misunderstandings regarding Anarchists and Antifa and I hope what I have to say might possibly help understand what’s going on a little bit better.

First of all, to explain myself. I’m a pacifist, I’m anti-violent. I’m also philosophical , Spiritual, cultural ( satirist ) , and yes, I am an Anarchist / Anti-Fascist.

Allow me to explain.

Not all Anarchists and Anti-fascists are violent.

The Anarchists and Antifa that you might see in Mainstream Television News differ from people like myself.

There’s actions that I don’t agree with but at the same time, I understand why they might be doing it so I’d like to shine some light on this subject.

The Anarchists that people see on mainstream television news is called “ Insurrectionary Anarchism “.

You might have seen footage of them doing destructive things like throwing molotov cocktails, setting fires, breaking police cars, lighting fireworks and throwing them at police and smashing windows of Starbucks and steal what’s inside.

I for one DISAGREE with these actions. These are actions I would never personally do.

But I might understand why they do these actions.

“ Insurrectionary “ is just one kind of praxis / school of thought, a kind of protest.

I much prefer a more peaceful approach as I mentioned before.

Anarchists don’t want to hurt innocent people. And they are well organize , more than most think.

They are not terrorists, it’s just a different political ideology.

Antifa can relate to Anarchism but also Socialism and Communism which are Leftists / Leftism and not Totalitarian / Authoritarian.

What the Mainstream News shows is Antifa being violent to people. And people like Trevor Noah calling them “Vegan ISIS” . Again they are often misunderstood and demonized.

Antifa NEVER hurts innocent people. There are far-right people of political ideologies beyond Trump and many of them are Trump supporters. These people are the enemies of Antifa because Antifa stands for Anti-Fascists.

These kinds of Fascists are also known as Neo-Fascists / Neo-Nazis / and are also Extreme Racist to the point of MURDER !

It’s strange to me that it’s Antifa that gets demonized more.

Antifa is a self defense group. They know those bullies hurt minorities such as people with disabilities, LGBTQ+ people, women, different races, etc.

But the violence is usually used as a last resort usually as a way to “Deplatform” their hateful political rallies.

Again, violence is something I don’t necessary agree with and it’s something that I wouldn’t personally do.

But when it comes to minorities being bullied, threatened, etc, this is something that most White Heterosexuals especially men DO NOT SEE ! There’s a lot going on that the news does not report.

So what does a peaceful Antifa mean ? It simply means your Anti-Fascist. If you agree that Adolf Hitler was an evil man, then you are Antifa. That’s all. ;)

But it does bring up another question. Why are both of these groups disrespectful towards police and especially the patriotism of The United States of America.

It’s a difference in political ideology.

Most people are told that there’s only two political ideologies.

Both Conservatives and Liberals are considered to be “ Authoritarian Right “.

Both are actually liberals.

But of course there’s many progressives that are seen which are often demonized as being emotionally unstable “ Social Justice Warrior / PC thug “ Millennials that need to grow up and realize that the real world isn’t fair.

The same negative attitudes are placed onto Anarchists / Antifa where there are people who strongly believe they need to go to prison, be punished and such political ideologies should be illegal.

I disagree with such negative opinions such as these.

Anarchists are Leftists, Liberals are Not Leftists.

Leftists claim they are the TRUE Left Wing politics where Liberalism is popularly claimed to being “ Left Wing “.

There are differences in political points of view.

The common grounds are very similar in terms of what most consider “ Left Wing / Left Leaning “.

However unlike Liberals, Anarchists are against “ Hierarchical Power over Others “.

According to the FBI . Gov website , Anarchism is legal and so is Antifa just as long as no one violates the law.

Anarchists question authoritarianism, authority, and hierarchy in a philosophical sense.

Emma Goldman was thrown out of America during the first “ Red Scare “ just for her beliefs.

Charlie Chaplin was also thrown out of America for being an Anarchist, for his beliefs.

John Lennon ALMOST got thrown out of America for being an Anarchist / Leftist which Nixon covered up with the immigration Visa termination and phone tapping and intimidating stalking.

Martin Luther King Jr and Albert Einstein were both Leftists and were against Capitalism.

George Orwell, the author of 1984 and Animal Farm , was a leftist.

Walt Disney had many employs against him during a Strike which he excused his Animators as being “ Communists “.

Lucille Ball was caught for being a registered member of The Communist Party during the 2nd Red Scare aka McCarthyism.

Abbie Hoffman & Jerry Rubin of The Yippies were Anarchists

and they were very good friends of John Lennon.

I love the internet because it’s like a public library at your finger tips. What’s unfortunate is that there’s people who would rather trust mainstream news as a legit resource than reading about something on Wikipedia or watching a couple of YouTube videos or even listening to someone’s point of view.

I hope someday , especially currently in the 2020s that the world will eventually become a more peaceful and more understanding place.

It’s all about understanding one another instead of divide and conquer.

We are All One.

For more information on Anarchism

Check on An Anarchist FAQ

And for Antifa, check out the following book

Which is actually more of a history book rather than an actual handbook.

An introduction to Liberals from an Anarchist / Leftist

Posted by Erica Crooks at 1:43 PM No comments: 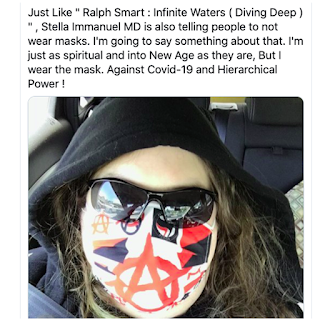 Most Spiritual people would side with Social Liberalism ( The Secret, Abraham Hicks, Bob Proctor, Jack Canfield, ) and believe that as long as your positive to yourself and your life, nice rich people can exist. I used to believe in this from 2012 - 2017/8 .
I understand many Empaths and Lightworkers, etc go through a Spiritual Awakening and are Spiritually Guided to TRUTH ! The New World Order / Illuminati Conspiracy Theories ( Teal Swan, Ralph Smart : Infinite Waters , in5D , etc )
Unfortunately many NWO Conspiracy Theories have many flaws in it. People can believe that there's dark entities in cloaks at the top but I'm just saying that Anarchism exposed the truth about Hierarchical Power A LOT BETTER where NWO Conspiracy Theories did not.
Furthermore NWO Conspiracy Theories have became more and more Far-Right ( Alex Jones , David Icke , etc )
Far-Right Conspiracy Theories don't just stop at Christian Right NWO Conspiracy Theories but can also get as evil as ALT-RIGHT FASCISM which not only leads to Hate but also VIOLENCE , MURDER , Cyberbullying / Cyberstalking, Antisocial Crimes against humanity.
As a Spiritual Anarchism, I am AGAINST Hierarchical Power especially in Spirituality Practice and Awareness. It should never be used as a hierarchical platform EVER !
Most Anarchists are Atheists and consider Spirituality / Paranormal / all this stuff as Pseudoscience and Conformation Bias. I say we shouldn't have Divide & Conquer over Science but accept any ideas including those we disagree with on the lines of " As long as it's non-hierarchical , no problem. " Anarchist Principles are about Liberty , Equality & Solidarity and Spiritual Principles is Mind, Body & Soul. So with the Two revolutions of Self-Love and Unity Consciousness, why not Spiritual Anarchism ?
Unfortunately New Agers such as Ralph Smart : Infinite Waters ( Diving Deep ) as well as Trump's Covid-19 / Coronavirus doctor deny the existence of Covid-19 / Coronavirus. We shouldn't demonize Spirituality, we should deplatform and protest against hierarchical power of not only disinformation but also in my opinion, those who use Spirituality as a tool for Hate, Fear, Power and Control.
Posted by Erica Crooks at 12:46 AM No comments: