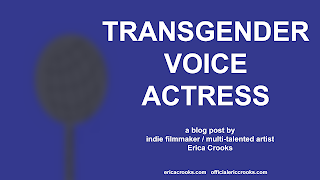 Now before I begin , for those who are curious about anything about me ,
I strongly recommend people check out my Official websites on
ericacrooks.com ( personal portfolio ) and officialericcrooks.com ( The Official website of The Erica Crooks Show and my comedy , puppetry , cartooning , work ) .

As well as all my social media which I have listed within my blog posts and such.

For those who don’t already know this , I pretty much do everything single handedly so perhaps I might get crucified or murdered some other way just revealing just that eh ? lol
I try to justify what I do as much as I can but sometimes art needs to speak for itself and besides a lot of stuff I do tends to be acting and mirroring the follies of humanity I most certainly observe as a satirist and anarchist.

So a big question I’m going to answer is “ Who does the voices “ in my puppet and cartoon animation videos ?
Well I do.
Perhaps inspiration I got where one person provided all the voices to their film work would be but not limiting to Beavis & Butt-head ( Mike Judge provided most of the voices ) , South Park ( Trey Parker & Matt Stone provided most of the voices ) , the audio sketch comedy albums of Cheech & Chong , Mel Blanc , Sam & Friends ( In the early days of The Muppets - Jim Henson provided all the voices however he had early Muppet performers such as Jane Nebel ( would become Jim Henson’s wife “ Jane Henson “ ) , Jerry Juhl ( later years , would become the Muppets #1 headwriter until he retired shortly after Muppets From Space ) , and Bob Payne https://muppet.fandom.com/wiki/Bob_Payne

Here’s a thing about Transgender people. Some transgender people already knew they were born in the wrong body early on in childhood and then there are those who become better aware entering adulthood like myself.
In 2008 I came out as Androgyne ( Genderqueer )
And my attraction to Butch Lesbian women made since so in 2013 I realized I am indeed a Lesbian born in the wrong body. But through out my life I noticed I felt comfortable around women more than men.
And even though I’m not 100% feminine , I also additionally identify as non-binary and I’m also non-op by choice ( however I’ve been on Hormone Replacement Therapy since 2014 ) .

So there’s two stories at play. My life as an artist and inspired fan of the pop culture I know and love.
And my life as a Transgender Lesbian Woman.

Now a big question is should Transgender people like myself be doing the stuff that I do ? I answer that very question WITH a question which doesn’t really need an answer as it is self-self-explanatory “ WHY NOT ? “

Furthermore , ever heard of ContraPoints ? https://www.youtube.com/user/ContraPoints

Another great example of an influential Trans Woman online.

So yes folks I am the voice actress behind my work since the beginning ( 1995 / 1999 * 20 years * )
As well as the cartoonist , puppeteer , puppet builder , director , editor , background design , comics , editing , mastering , music composing , etc .
( However some special effects such as fire and explosions I use from the free stuff page on https://detonationfilms.com which according to their legal statement is totally ok . )

And yes I have done live action acting if it was in my drama class or my occasional live action comedy stuff.

( From 2013 - 2015 , I did a dark comedy web show called “ Bad Public Cable Access Television “ https://www.youtube.com/user/officialericcrooks/search?query=Bad+Public+Cable+Access+Television  where I performed these psychopathic self-important idiots with Public Access Television Shows which was loosely based off of my observations during the years The Erica Crooks Show ( my puppet cartoon show ) was on public access television in my local area from 2006 - 2009 as well as my college internship and volunteering in-between and after having my show leave the station due to disagreements of censorship https://www.youtube.com/watch?v=vEt8mAnwDbI .
There was also a very short lived revival called “ Bad Video Access Television “ which the concept of bad vlog videos on the internet got recently adopted by The Erica Crooks Show’s recent seasons last year and this year ( at the time I write this ) .

There was of course other side things such as experimenting with Alternative Stand Up Comedy in 2015 which I have performed live without the special effects and slightly toned down. Which is just basically me telling satirical jokes and such and some voice acting where in these videos has slapstick and special effects , etc.

I did do a video in 2009 which no longer exists ( at least not from my archives ) called “ The Cooking Show “ where it was just a bunch of explosions and fire special effects matted later in post-production . I GOT IN BIG TROUBLE FOR THAT ONE which resulted to me running away from my abusive father and wicked ex-step mother.
Basically they thought I was an Islamic terrorist for doing that which makes no sense.
And that was all because of two ex-friends who were cyberbullying me and they continue to bring me down and discredit me to this very day which I think it’s because that’s just how right wing supporters think of leftists.
But no folks , I’m not a Muslim . I’m into New Thought / New Age Spirituality.

I decided to stop doing the live action stuff because I felt that perhaps if I continued doing live action voice acting , no one would take me seriously as a Transgender Lesbian Woman.
Similar reasons include The Eric Crooks Show finally changing the name to The Erica Crooks Show in 2016 - present day ( however the website officialericcrooks.com still remains reflecting the original show name , not me . Almost this sense of “ Eric Crooks “ never existed , kind of a Monty Python vibe to it , but the show itself dropped that in 2016. )

However I still stand by doing what I do including voice acting such as my audio comedy.
“ Audio Broadcast of Satirical Comedy “ and experiments such as audio movies which all are a homage to the forgotten media art form known as “ Radio “ but we do occasionally hear of things such as podcasts.
https://www.youtube.com/watch?v=qn84A8PMFMQ

So in conclusion , there’s nothing wrong with a Transgender being a voice acting performer .
And just because I’m a Transgender Woman doesn’t mean I’m not allowed to perform men characters which is simply because of my voice range being born in this body through out my life existence. However I have performed women characters as well .
https://www.youtube.com/watch?v=J6mw91BfB-g
https://www.youtube.com/watch?v=D2vHj_XzOCY

So perhaps what I’d call the live acting stuff , perhaps it’s Drag King performing .
My Twin Flame performs as a Drag King lip-sync performance artist at Pride Nightclubs as well as a model ( If she wants to call herself a Drag King model , She does lots of selfies lol ) .

Besides , in this history of acting , it’s always been flexible.

There’s many cisgender women who have performed boy characters in cartoons
From Kathleen Barr as Kevin on Ed Edd N Eddy to Christine Cavanaugh as Dexter in Dexter’s Laboratory .
Even in The Muppets , Frank Oz performed Miss Piggy and Richard Hunt performed Janice .
Even actress Hilary Swank played the whole of tradesman Brendan Teena in the Dramatic Documentary film “ Boys Don’t Cry “ .

And weren’t there a lot of men performing women roles in theater many many many years ago ?

So there you go. Acting as it’s flexibilities.

Just because I have performed a bunch of right wing , self-self-important , narcissistic , psychopathic jerks doesn’t mean I am one.
Just look at the crazy characters Rick Mayall as performed.

Ok philistines , there’s the art lecture for the day. lol

Posted by Erica Crooks at 4:01 AM No comments: