When Dark Takes Advantage of Light

When Dark Takes Advantage of Light

This post is about Narcissists and how the Dark & Light philosophy could be the solution to a social revolution ( Anarchist Society  / 5D Earth ) using Law of Attraction wisely and collectively.


Posted by Erica Crooks at 9:39 PM No comments:

We Fear What We Do Not Understand , sometimes we need to learn about it . Also sometimes what triggers people has nothing to do with what's on the outside , perhaps it's an inner trigger of the individual which the individual needs to do shadow work to know why that certain thing has " triggered them " .

Posted by Erica Crooks at 6:20 PM No comments:

We Fear What We Do Not Understand , sometimes we need to learn about it . Also sometimes what triggers people has nothing to do with what's on the outside , perhaps it's an inner trigger of the individual which the individual needs to do shadow work to know why that certain thing has " triggered them " .


Posted by Erica Crooks at 5:29 PM No comments: 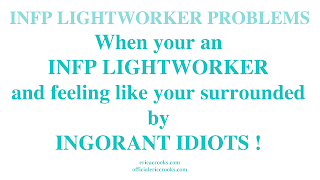 And several blog posts relating to the subject that perhaps Right Wing Politics are WORSE THAN YOU THINK !

And if there’s something that can rattle my cadge , it’s ignorance.

Even John Lennon knows how I felt.

I think there’s a lot of people misunderstanding one another and just assuming they know something without doing good research about things.
And also when I go out and spread the word of truth and awareness of how
The Right is in control of all things fear and bad just so they can discredit and hurt “ Leftists and Minorities “ , perhaps I kind of look like a political crazed maniac to some.
But what’s interesting is I’m literally being spiritually guided this whole entire time.
When it all came to my mind , it was like a slow thunderbolt and then BAM ,
I am almost to the point of automatic typing.
When writing notes to myself , I even wrote to myself that I am being spiritually guided.

Last night I had to keep double checking with my spirit guides and they told me that I was being spiritually guided and always come to them when I need assistance in guidance.
I told my guides , I don’t feel so good putting myself out like this and they told me that it’s fine , it’s just energy and they are not dark entities.

I’ve been sick for about a week and every day it seems like debunking the right was the big news headline. Sure I agree with it but , I’m trying to work with my Twin Flame out of Ascension and into Twin Flame Union.

So I guess it’s all about cleaning energy and just raising high vibrations because a lot of time , these sort of emotions aren’t even my own.

Here’s what is interesting about people on the internet.

People rather socialize than do their own research on stuff.

I was also guided by the idea that sure there’s certain people on the internet that inspired me with such knowledge , but perhaps there’s stuff they don’t know that I do.

People can be strange. Some people can perceive me as someone who’s just trying to jam information down everyone’s throat and perhaps they have little interest in learning about the truth like I am.

For me , it’s about questioning why life is the way it is.
Maybe it’s a certain thing when it comes to SOME cisgender heterosexual men to shrug off
Any sort caring for minorities and leftists ,
But to me , THAT IS NOT AN INFP !

Then again perhaps it all depends on people’s individual upbringing.
For example , if you had authoritarian parents , that it all depends on how well you are with your shadow work and realizing stuff your authoritarian parents said was WRONG !
Your knowledge of how perhaps Left wing politics sounds more like you than anything The Right says. And of course knowing the difference between an INFP and an STJ personality type.

Sure there’s different numerology and zodiac and enneagram , but at the same time I need to do research on this.

The big picture I present is “ Hey folks , I found that Another World Is Possible ! And anti-Bully world , a 100% free world is possible ! “
It’s Libertarian Socialist Anarchist / Anarcho-Communist Free Society and or 5D Earth.

And I’m going to admit this , yes even I have been ignorant of stuff.
But it’s because I wasn’t aware !
When I got into The Secret , Bob Proctor , Abraham Hicks
There was this desire to becoming RICH and wealthy.
But it’s because I just wanted to be financial secure doing what I love doing.
I had absolutely no idea about THE TRUTH about the evils of capitalism as I slowly learned in 2017 - 2018 .
Yeah just recently.
Anarcho-Communism can make EVERYONE RICH ! Beyond !
Money is just a system to control people !

Perhaps that’s just it !
Sometimes people could be on the same page but their understanding of certain concepts are kind of misinformed.
For example someone can be anti-capitalist and anti-government
But think libertarian socialist anarchist / anarcho-communism is the evil agenda of The New World Order WHICH IS NOT TRUE !

Again , there’s people who’d rather socialize then do their research.

Perhaps we are all ignorant of something.

Ignorant is an insult , Ignorant means “ lack of knowledge “ of something.
And when it comes to human needs YES we DO want to be with like minded people.
So sometimes feelings speak louder than words but the words don’t match up with what you are really talking about , what you are actually seeking , what you actually mean .

There were times I thought socialists as liberals , I was ignorant of my political knowledge.
For many years I thought my Twin Flame in telepathy was ENTP but in fact she is ESFP ( I think ) .
I used to have liberal views on how everything is equal.
I didn’t even fully know anything about Transgender Women until I sat down with my friend and hung out since the last time we seen each other was 10 years ago at a private safe space Transgender meeting.
My friend passed away the day I came out as a Transgender Lesbian Woman in March 2013.
From 2008 - 2013 I just identified as Androgyne ( Genderqueer ) .

But here’s something about my ignorance.
Before all that , I described my orientation as Queer Heterosexual before I realized that I’m a lesbian born in the wrong body.
And before that , I wasn’t sure if ( before I tossed these state labels out of my personal soul identity )  Asperger’s Syndrome pointing out why I think differently from the world , perhaps my orientation is associated with Andromimetophilia .
This was EXACTLY 10 years ago.

Let me say for the record , no , I am not attracted to Transgender Men .

So yeah , we are all ignorant of something , and we all live and learn.
However , the problem is not everyone has an interest in learning what they do not understand such as myself.

Here’s a think about me.
Perhaps I’m a slow learner but everything I talk about regarding myself , it has a strong foundation of “ YES , THIS FEELS RIGHT TO ME ! THIS IS SO ME ! “
And what I learn “ YES , THIS MAKES SO MUCH MORE SENSE TO ME ! “

I’m open minded. If someone knows a better way then it would need to prove itself to me because hey that’s the story of my life.

I think there’s lots of people out there that are not even self aware of themselves or the world around them.

I have listened patiently to Right Wing people. I even had an ex-friend of 5 years who was not only conservatives but he faked the whole friendship because he’s a sociopath.
And I do see a strong link behind sociopath and right wing.
However I did noticed once when talking to an older lesbian at this lesbian dance group I occasionally hang out at ( it’s mostly middle aged lesbians but I just have an old school taste in music and for the most part they have been welcoming of me. )
, one I talked to was republican.

I’ve said this before and I’ll say it again.
There’s people who are republican because
(1. They are brainwashed by the manipulation of emotion , fear, sympathy , and hate ( Just like nazis did in WWII )
( 2. Sociopaths that are brainwashed because it’s just narcissistic supply for their anti-social crimes
( 3. Sociopaths that are totally aware of what they are doing , controlling people. AKA Trump for example ( BUT HE IS NOT THE ONLY ONE )

There’s a meme I seen recently that says “ The very face you make when someone you thought was smart suddenly says how Trump is a good president “.

Anyway , with the work that I do. I make sure I have resources in my Pinterest https://www.pinterest.com/officialec1/
And say “ HEY  , here’s stuff that inspired me. Maybe it’ll inspire you as well. “

All I know is this.

Perhaps influence is the only thing I can do.

People have free will.

They want to stay ignorant and believe in the lies of the right they will.

Perhaps as a lightworker , not knowing if an anarchist society / 5D Earth can happen in our lifetime due to the damage of hierarchical systems including Right Wing people who use The New World Order conspiracy theories against minorities and the left ,
Perhaps we should forgive from a far.

Love is natural , Hate and Fear is taught .

Soul is open minded to everything that’s love and peace.

Ego is all self important.

And when we live on Earth , some days we slip and need to get back up into that high vibrational groove again.

Lastly I just want to mention which most perhaps already know.
I’m a Transgender Lesbian Woman .
And in 2019 as much as I want to believe that most people get LGBTQ+ people , a lot of people who are outside of Pride DON’T !

Anarchists seem sometimes to be more about caring for minorities and leftists than some New Age people since political differences vary.

Again going back to ignorance ,
I considered myself to be Independent / Social Liberal Libertarian .

Finally let me conclude with the question
Why do I hate Right Wing supporters ?

( 1. They are against Minorities and Leftists and anyone who’s like me
( 2. It’s a brainwashing cult , Nazis is a great example. Nothing’s changed just the names and political methods of brainwashing

If you can relate to at least a little bit of what I present and you think other like minded people would be interested , please explore my stuff I share and spread the word.
Perhaps someday we can have our community of like minded people. :)

Posted by Erica Crooks at 9:23 AM No comments: