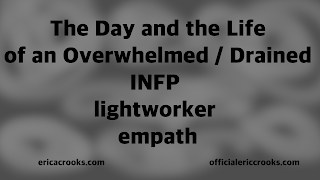 I’m just going to write out this blog because even though it might not seem it , I think I’m a lot better at these blog thingies when I write it out. Perhaps my blog videos would be better if I planned it like a film which I might. But what’s weird about me because I guess I’m sort of an entertainer artist as well as a satirist , even though I’m partly being natural , still I feel this way is so much more organic. It’s not that I’m trying to act like an ENFP , but I just feel that when I do a blog video , I got to think of it as if I’m giving advice to people and sort of a cheer me up healing sort of thing as a reminder that they aren’t alone in this world. And perhaps it relates to my mission of love as a lightworker because I was there. I think we all need that reminder the longer we are slaved in this hierarchical global society.
It’s probably because I’m an introvert so I can think about things I want to say and also having typing skills I’ve learned from high school really pays off with barely looking at the keys on my laptop which I type this. Also speech to text dictation writing might work for some and it may be cool for note taking especially when your tired but it’s frustrating when it isn’t accurate to what you say. We have enough journalists in this world who do that job probably more fiendishly ( no offense if your a journalist , just a satire on the capitalist interests within media in general ) .

Anyway as an INFP light-worker , perhaps something I need to do more and especially something I think about as I become 31 next year is just how I need to take better care of myself. Not just losing weight but spiritually , body mind and soul . I can work in bursts of energy but then I need to recharge. I remember studying something about Judgers vs Perceivers that the Judger would just make a plan and stick with it until it’s complete.
And the perceivers would do a little bit of work , recharge , little bit of work , recharge , and make a spontaneous finally to complete the project. And so regarding my film work and what I do , yes there are many times where I just wing it structureless like this blog even though I’m just typing it out. And perhaps my sense of humor and playfulness reflects that me being an intuitive perceiver ( NP in MBTI Myers Briggs Personality Type Science terms ) . However I often notice that the work I’m most proud of is often those in which I worked my behind off for months with detail and just stuck to it even though I’m horribly board so I just add a bunch of background gags and visual humor and all sorts of gags if it’s related to the sketch or story or not just to entertain myself within the process.

Today I was thinking of the difficulties of being an independent filmmaker where my stars are fictional. And sort of reminds me of a blog post I’ve written not to long ago at the time I’ve written this.
https://www.facebook.com/notes/erica-crooks/cartoons-animation-comics-radio-comedy-literacture-puppetry-etc-pros-and-cons-/1746495752117802/

( 1. How much does it cost to produce

( 2. How long does it take to produce what I want to produce

( 3. How much hard work and effort is required regarding what I want to produce

And usually I don’t think this way unless I drained myself silly.

As you probably already know , I’ve done a ton of blog videos and posts relating to MBTI Myers Briggs Personality Type Science , Libertarian Socialist Anarchism and New Thought / New Age Spirituality and even though I didn’t cover things in detail like I should , perhaps what I was really doing was promoting the idea in general because I believe that not only does all this sound like a utopia for me but perhaps other people as well.

But one of the things about lightworker mission I slowly learn is not only is love the answer to everything but also any action , thought , feeling is an expression of unconditional love.

But at the same time , perhaps I’m not only a healer artist sort of speak but a Heyoka Empath ( Sacred Clown / Mirror Empath ).

There’s a quote that relates to all this “ Art should disturb the comfortable and comfort the disturbed “ .

Another one too is “ Hate humans but love humanity “ lol

As an anarchist , the mainstream hierarchical society is very hard to enjoy , it’s quite limited. However it can lead to a possibly of the future say if the chains of Law and Order don’t cloud on it.

As I went to the bank yesterday to fix an issue with my account , such important appointments which only seem important to the material world but not necessarily to me as an old soul but just as irritating due to hierarchical laws that have a lack of sympathy and empathy for humanity and life on Earth , let’s just say that I can relate quite well to a rant by John Lennon.

John Lennon knew “ We’re a minority , people like us always were. “

If your an INFP , perhaps you can relate this when your overwhelmed . But who’s to say that this is relating to being an unhealthy INFP ?

Is this iNtuitive Bias ? Or the frustration of an INFP lightworker ?

I don’t want to sound co-dependent to strengthen my self esteem or anything like that. But the thing that’s always helped me out is perhaps sort of relating to what I do besides my satirical puppet / cartoon stuff which is to reach a guiding hand to my fellow like minded people with the reminder of “ Your Not Alone “ .

The internet helped me out so perhaps doing the same will help out future generations of like minded people , just as long as the Government doesn’t get rid of our freedom on the internet . https://www.youtube.com/watch?v=VIUpMNa1AcE

And it’s not like I’m in denial when I believe in New Age / New Thought Spirituality , it’s just the way people go about teaching it and having it relate to the capitalist / consumer world of all things sugar coated superficial .

Perhaps my own happiness is totally related to anarchism . I strongly believe in the principles of Libertarian Socialist Anarchism as well as Mutual aid .

As I said in all my blog stuff as of 2018 , If people were aware of all three MBTI , Libertarian Socialist Anarchism and New Thought / New Age Spirituality then we would have our social revolution by now and won. Perhaps even a peaceful one.

But we are all in this together , not just me. Everyone is doing their part , even the ignorant which is why I think uniting the left is a must.

There’s reasons why I left my local pride community , the most being that my Twin Flame became a Runner and only awake in telepathy while Ego body self is perhaps unawake .
My Twin Flame could very well be an ESFP , but I will only know for certain after union.
Still , when Twin Flames are two half souls that merge into one , if such Ying and Yang works out in a relationship , does it really matter if two people love each other ?

Sometimes it’s difficult finding peace . Part of me feels that the world needs to be at peace before I can be. But sometimes I just need to recharge just to keep my sanity.
And perhaps reading helps.

And as I mentioned regarding John Lennon , he too had the same problems an INFP does because he was INFP too !

I think that reminder that your not alone in this world helps , as well as knowing that there’s nothing wrong with you. If you aren’t hurting yourself and others no problem.
Sometimes people’s negative reactions of you is their problem and not yours.

There’s a book I like called “ What you think of me is none of my business . “

Yes , people have said cruel things to me. I have been treated with verbal abuse because I’m an empath . https://www.officialericcrooks.com/adults-get-bullied-too.html

Even people within my local Pride Community are starting to mock me behind my back because I’m trying to reach out to my unawakened Twin Flame where everyone who’s clearly sticking their nosy attention into my business and seeing me negatively or just a fool. One time being thrown out of a nightclub in 2017 when trying to peacefully talk to my Twin Flame.
My mother happened to be with me that day because my Twin was performing that night and I gave my Twin some flowers as a token of my appreciation , support , and even sorry if I screwed things up with the Twin Flame Running / Chasing Separation situation. My mother was pissed and sort of not trust my Twin Flame in full. But I’m still working on Twin Flame Ascension .

I find this article quite useful relating to that aspect http://www.twinflames1111.com/blog/q-a/negativity-twin-journey/

Besides , I personally think that LGBTQ+ Anarchists can run a better Pride Community filled with mutual aid and everything .

There’s prejudice within the local pride community at least from my experience. I haven’t seen the worst but I hear about stuff all the time.
https://en.wikipedia.org/wiki/Pink_capitalism I think this is related.

But perhaps it’s not so black & white . Still , capitalism and hierarchy brainwashing hurts who ever they touch including the innocent and of course my like minded people !

I think as a satirist / Heyoka empath , having a sense of humor no matter how irreverent helps bring about a care free spirit. Perhaps that’s how we all should be.

Someday uniting as one laughing at the face of negativity because someday it will not hurt us and justice and everything shall be in the power of the people instead of the people in power.

Like what The Secret said , sometimes I just got to keep up my hope and faith and believe in the miracles of the unseen. Just keep thinking about what I want and know it’ll someday become fact in reality because of like minded energy for those who support it individual and collective alike.