I’ve been a huge fan of Spitting Image and Les Guignols De L’info for a long time now.
It all started with catching glimpses of Contra Informação on television . I would have the RTP channel on cable during the 2000s . I was 13 when September 11th happened and at the time there was webcartoons satirizing George W Bush and Osama Bin Laden . One video that went viral around that time was a Budweiser commercial ( WAZZ-UP ! ) parody featuring realistic caricature puppets of Obama Bin Laden , Saddam Hussein , Muammar al-Gaddafi calling each other over the phone parodying the commercial . Suddenly it shows that 2 Government Men ( who look like Sylvester Stallone ) are tapping into the phone call. George W Bush ruins it by going on a microphone shouting ( WAZZ-UP ) with causes the terrorists to hang up the phone.
This was my introduction to Les Guignols De L’info. I was so amazed with the puppets and … here’s a thing about me , when I see and ear something that I like , I become obsessed . It’s a good thing that I don’t drink. lol
I was talking to a puppeteer friend of mine about these shows and he told me they were a rip off of Spitting Image. At that time I started high school shortly after. The first things I’ve seen of Spitting Image was a very pixelated video clip of The Who ( My Generation ) parody from 1986 ,   a clip of an interview with Ian Hislop talking about The Spitting Image 1987 Election Special , The very first episode , An episode from 1985 which ended with a parody album commercial about the RS232 Interface Lead . This was before YouTube , so let’s just say that don’t know anything about “ illegal downloading “ back then. ;) Then on a couple trips to New York , I went to the The Paley Center For Media ( The Museum of Television and Radio ) and watched as much Spitting Image as I could find. The first time was this compilation of the best of Spitting Image’s first 3 series. The on my next trip , I watched a couple episodes from 1989 and the 1990 episode where Margret Thatcher was in a coffin the whole entire episode ( symbolized her resignation ) .
And I have been a huge fan since. :)

So with the question remaining , Would American versions of Spitting Image / Les Guignols De L’info work ? My first question is “ WHY an AMERICAN VERSION ? “ I loved the shows the way they were. Also I find British swear words and slang funny ( Yep that shows that I’m from America lol ) . British Comedy makes me want to understand the differences of their culture compared to America. How they call Soccer “ Football “ , How they call TV / Television “ The Telly “ , How they call French Fries “ Chips “ and how they call Potato Chips “ Crisps “ for example. Or how we call a series of episodes per year of a television show a Season where in Britain they call it a series but we call the show as a whole a “ series “ . lol It’s interesting and fun to learn. Saying an American version of Spitting Image and or Les Guignols De L’info is kind of like saying an American Monty Python’s Flying Circus. To me , that sounds like a total dystopia , just like any reboot / remake that’s not from the original people , it’s going to suck and it’s going to disappoint fans. But of course in capitalism , no one cares about the cult following fandom that actually cares about the show. They want to reach the masses.

Americans for the most part never heard of Spitting Image and Les Guignols De L’info. The only thing about Spitting Image that most Americans know about is the Genesis Land of Confusion music video from 1986 , and even then most people think all the puppets were created for that one music video. They have absolutely no idea they had a television show of their own. However those who were around the 1980s might have remembered the 3 NBC Specials.
It’s kind of like answering the same question on why the 1990s Muppet Movies were so good and better than The Muppets ( 2011 ) and Muppets Most Wanted , all four movies were made after Jim Henson’s death and all four had The Walt Disney Company involved. The answer to that is the same with why the NBC Spitting Image specials were great , they were made by the original crew .

I think Sid and Marty Krofft were hired to create DC Follies . Sid Krofft said that with DC Follies he was delivering what the American audiences wanted to see but not vicious like Spitting Image.
And that’s my point . If an American Spitting Image and or Les Guignols was possible then it would end up like a cross between DC Follies and Saturday Night Live.
Americans are very cautious with their satire for the most part. Kind of liberal. Unless you count South Park which is currently Right Wing Libertarian ( The Libertarian Party ) and kind of centrist and same with most American satire like Bill Maher and SuperNews! ( which was inspired by 2DTV I think ) .

Besides , there’s already an American Spitting Image show out in time of Trump which is Stephen Cobert’s Our Cartoon President on Showtime. And it just makes SuperNews! Look good and it’s not as great as Lil Bush which was on Comedy Central years ago when I was in high school .

I heard about the Les Guignols American revival which someone from The Daily Show with John Stewart being involved as well as Robert Smigel ( Saturday TV Funhouse from SNL which I’m a fan of ) . It’s almost like no one seen the PBS documentary “ Anti-Americans : A Love / Hate Relationship “ . It’s like the magazine version of Les Guignols De L’info was Charlie Hebdo and Spitting Image was like a cross between Mad Magazine and Private Eye Magazine as well as Week Ending / Dead Ringers .
In Europe they were fearless when it comes to satire. Les Guignols De L’info lasted 18 years longer than Spitting Image , had a bigger budget and they went beyond any satire show I’ve ever seen.
And when Charlie Hebdo got attacked in 2015 , Les Guignols reported it with the same fearless satire as Charlie Hebdo. I often wonder if that was the reason why they were about to get canceled.

The big story was that Vincent Bolloré bought Canal+ and was going to cancel Les Guignols De L’info as a favor from his friend Nicolas Sarkozy due to his worry that Les Guignols would ruin his chances of being re-elected in 2017.

The writers from the 2000s were fired , the producer / show runner shortly after , Les Guignols was half it’s length and the budget kept dropping until they were canceled in 2018.
What was interesting was there was 3 last episodes mocking the situation.
One was PPD in the familiar Les Guignols De L’info setting going to a crew party where he hears the show was getting canceled and he packs up .
The other one was a goodbye song which is quite similar to the ending of Spitting Image in 1996 except it was more low key.
The final episode featured PPD and Jacques Chirac leaving the Canal + studio where Bob Sylvester of The World Company dismisses them. The last episode ends with PPD looking back and leaving slowing in depression , sadness and that feeling of loss that the satirists lost and the evil capitalists have won.

So when Roger Law mentioned in an interview that the American revival was going to be written by Americans , I knew that was a sign that it wasn’t going to be great. Both shows didn’t mind not being patriotic and nationalistic to America but in America it’s a totally different story. If you are not patriotic in America , people will hate you and want you out of the country.

But when you don’t have great satirists like Ian Hislop on board , and you have American writers instead ( which is not likely they are going to be leftist or even at least as progressive as the ones who written great satire on the show Dinosaurs ) , It’s not like they heyday of Mad Magazine is what I’m getting at.

Still I’ll be excited to see Spitting Image / Les Guignols De L’info either way. Besides there should be a better release for them on DVD and digital anyways.

Posted by Erica Crooks at 6:42 PM No comments: 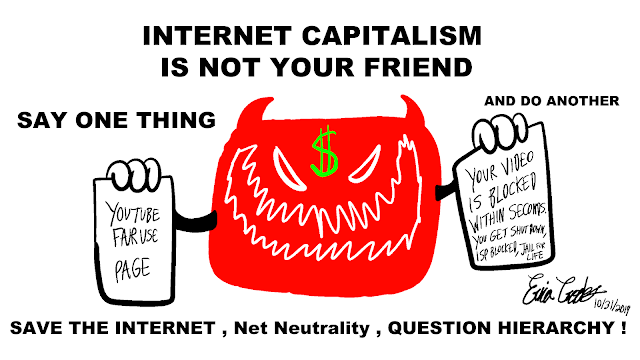 Posted by Erica Crooks at 11:28 AM No comments: