Satire : Why Satire ( a blog confession of a satirist of over 10 years ) by Erica Crooks 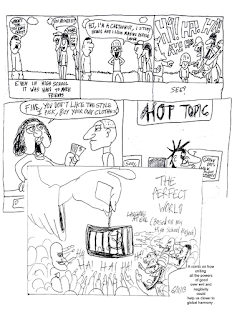 Satire : Why Satire
( a blog confession of a satirist of over 10 years )
by
Erica Crooks

In your mainstream so called free countries and most places I suppose , and most certainly when I was in high school and college about 10 years ago going on now , it’s not as common as it was about 25 years ago. We live in a generation where young adults and people in their 30s probably never even heard of Mad Magazine .
As I am now 30 years old , and my Twin Flame who’s 6 years younger than me , it reminds me of the sketch I had on The Erica Crooks Show where I had this pop culture obsessed fan freaking out and sobbing in denial that “ The 1990s are not over ! How can there possibly be a generation that did not have a 1990s childhood !“ . And it’s really nothing to be all ageist about since today’s internet technology can generate any information of any pop culture out there.
But still , I’ve always been more in tuned with stuff older than myself which of course influence is traditional in art and perhaps life itself.

I still remember as a kid how I feared Mad Magazine and Cracked Magazine , freaked out when I opened up a Robert Crumb book in my local library at the time , feared Meet The Feebles / Puppets Who Kill / Crank Yankers and Greg The Bunny and stop watching South Park after Garrison threw Lambchop on the grill from the episode Summer Sucks Season 2 . However when I was becoming a teenager , more and more I understood that parents told you lies and perhaps untruth is more to fear then what was perhaps trying to tell me the truth in an entertaining yet irreverent sort of way.
Mad Magazine , Simpsons , South Park , Dinosaurs , Spitting Image , Robert Crumb , Les Guignols De L’info
just the few of many that got me into satire.

Satire is literature no matter what art form it takes , but to me if it’s not doing what it’s suppose to be doing then it isn’t satire. Satire like any sort of creativity and intelligence is so left wing. Because right wing is nothing more but hate and fear filled lies and easy answers from hierarchical power brainwashed to the uneducated and ignorant.

I’m into New Age / New Thought Spirituality in which I was since 2007 - 2012 onward trying to figure out just what the heck was happening with me which lead me to meet my Twin Flame face to face in Winter 2015 / early 2016 .
Also I do believe knowledge of The Law of Attraction as well as awareness that I was a victim of Narcissistic and Sociopathic abuse most of my life and I was living in this cardboard box life where I had barely a connection with the outside world , no wonder I feared coming out of the closet. Also if it wasn’t for my artistic talents that helped me survive before then , I would most likely be dead and have committed suicide.

But what would possibly drive someone to becoming a satirist ? Same with all the aspects of me from being one of the LGBTQ+ , being a Twin Flame , an anarchist and having a spiritual awakening prediction of knowledge of the existence of Anarchism and The New World Order and Twin Flames before even knowing the name of the subject matter in order for me to do research.

I seek truth. Not only about the world around me but even about myself. Why do I feel different from the world , this stuff I can resinate with my heart and soul - where can I learn more about it ?

Satire is in the words of Ian Hislop “ Exposing vice , folly and humbug. “

I feel my life as a whole has been lead , barely choice.
That’s like saying I choose to be transgender. No , I’m born this way.
And I can say the same with everything I resonated with.
Are INFP personality types smarter than everyone else in terms of soul intelligence ? I don’t know but there are many times I do in fact feel like I’m trapped in a world filled with idiots.
Despite my super friendly personality , kind heart and social public gentle manners .

As someone who’s into New Thought / New Age Spirituality ,
they say to just do not think negative thoughts and feelings otherwise you’ll manifest a hell on earth.
From my understanding of manifestation , we manifest what we FEEL , not what we think. That’s why artists of horror film can turn out to be good happy people , likewise how people can get away with murder their whole entire life unless emotional resistance is stronger. Perhaps social revolution can be accomplished as just that , a COLLECTIVE of manifesting the SAME VIBRATION !

So what exactly is the point of satire.
I came across a native american empath term which is known as “ The most powerful empath ever “ . Heyoka : The Sacred Clown .
This is me !
As weird as it sounds , when I’m at my happiest and most chill , satire fills by blood and soul with joy.

Because I’m so interested in knowing THE TRUTH , and EXPOSING the truth.
New Age people ( who are left wing / anarchist or similar ) who know about The New World Order know this. And they can’t possibly
attract negative karma to block their chakras because THEY DO NOT GIVE IT ANY FEAR !

Likewise the point of satire , WE WILL NOT REACT IN FEAR , Someday we will NOT have negative emotions of any kind.
And it just makes satire that much funnier and perhaps in an Anarchist Society “ PATRIOTIC “ ( maybe the wrong choice of words and terms but treated with such strong reverence for the irreverent I must say ) .

Laughter is a sign of joy , the more we are happy , the more it KILLS EVIL , KILLS NEGATIVITY , and shows the mirror of ignorance and stupidity right to it’s face !
And the only reason why people wouldn’t think and feel this way is because their soul is suffering in the bondage and the quick sand of negativity.
So don’t bark at me for being the evil one now.

It’s a defense for a better world for all
and when we do live in that better world , it’s a happy joke
, a mooning at fascism.
The inner child / child at heart within each and every one of us sticking our tongue out at hierarchy.

THAT MY FRIENDS , is THE SOUL AND SPIRIT OF JOY AND PEACE !
But with a happy heart.

That’s why I say
“ The Angels must be laughing “ .

Life is about happiness , peace , freedom , prosperity, and joy !

Forgive with unconditional love and let’s help make the world a better place to live in.