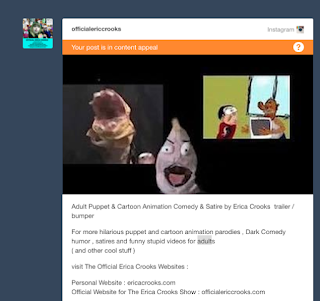 Hey folks , do you know that if you post a short tumbler message that has the world “ adult “ in it , it would automatically violate terms of use of Tumblr ? Perhaps we should use the word “ grown up “ again. Just in case you are wondering from my experience , they were posts relating to classic clips from The Erica Crooks Show which feature puppetry and cartoon animation. Oh I’m sorry , did the capitalist conglomerates of Hollywood make a law in which independent artists who are outside the Hollywood mainstream entertainment industry and isn’t a member of any union a violation of THE LAW ? If so , then they are just asking for an anarchist revolution that much sooner. lol

But seriously , how totalitarian / authoritarian is that. Pretty soon I can even say such senates as mature audiences .
Perhaps the reason why I use “ THAT A WORD “ which means full growth human being is probably because most people think such art forms like puppet shows and cartoons are not for grown ups.
Here’s the unfortunate thing. Years before the rise of capitalism , puppetry and cartoons were often used in not only storytelling just like masks and any sort of theater and literature , but political satire as well.
It probably wasn’t until the 1960s and onwards little by little where there would be such a cultural acceptance.
Thanks to the internet , we don’t need Tumblr’s censorship if that be the case.
But of course this whole problem is due to them using stupid censorship bots that just do not work !
Before I was using my sick mind to try to figure out of a bot would see pictures of hand puppets anything outside of them being hand puppets in a naughty x rated since. Or perhaps this is all within the workings of the evil minds of the FCC wanting to turn the so called legally free internet into one giant Netflix or Hulu which you got to pay the same price as your internet bill or even your car insurance bill. Either way this kind of censorship is stupid. Perhaps I should go by doing my “ website only “ stuff like I used to do before I branched out to social media but the problem is , it’s freakin expensive and websites don’t get traffic.
Thank you capitalism , you strike negative miserable energies to the people again while the fat cats sit on their butts and do nothing but eat , sleep , verbally abuse people over the phone , smoke cigars , and probably burn their butlers with it when they are feeling bored. Or perhaps get rich social media companies to do stupid things such as this. Satirically speaking , _ Erica
#anticapitalism #anticapitalist #satire #internetcapitalism #antiinternetcapitalism #anarchist #anarchism #antiestablishment #censorship #tumblrcensorship #tumblrsucks #socialmedia #classwar

Posted by Erica Crooks at 1:01 PM No comments: