Friend or Bully : puppet show for adults about forgiveness ( 2018 )

Friend or Bully : puppet show for adults about forgiveness ( 2018 )

Sometimes adults need this reminder too.

Twitter: http://twitter.com/crooks_erica
Posted by Erica Crooks at 9:30 PM No comments:

Getting Rid of The Internet is only the beginning of their evil plans.

Posted by Erica Crooks at 9:19 PM No comments:

Barney the Hand and Dr LeBrick talk about what they thought about THAT P...

Finally , puppets speak out about " The Happytime Murders "

Puppets talk about how puppets and even cartoons seem more and more humanized in the media now a days.

And perhaps the whole sugar thing is nothing more but a stereotypical myth.

To check out The Erica Crooks Show , watch this playlist. 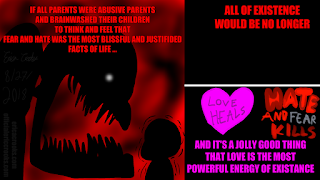 If you want to know what true evil is , it’s hierarchy.
What causes hierarchy , it’s hate and fear .
Sure some don’t believe in the duality of Good vs Evil , in fact they are indifferent to it.
On a spiritual level , it’s Soul vs Ego , and right to the core if it all ,
It’s a battle between Love vs Fear.
And such fear can be aggressive or submissive in depression.
As an Anarchist , I say that hierarchy is to blame for all the world’s problems especially those which are addressed all the time within New Age / New Thought Spirituality.

Some can point and say it’s right wing politicians. That can be true.
But notice that no one ever says anything regarding Democrats ?
For anyone who truly wants the ultimate good in this world ,
Why would so called “ Realistic “ options be the best since it lied about it’s usefulness through tradition.

If we want a better world for everyone , everywhere or everything , then we got to build the new world in the shell of the old . We got to realize that the fight isn’t among ourselves but those who keep us submissive to their power and whatever authority they claim to have.
A fascist cyberbully troll ( https://www.officialericcrooks.com/adults-get-bullied-too.html )
, Trump , or the ruling class who may or may not expose their face or have a public identity , it’s the same thing.

Yes , we all do want happiness in our life. But thinking “ Reality “ is the way it is is just the very indifferent language of secretly “ GIVING UP ! “ .
But what if we can fight with love. What if we can understand what we fear.
What if the fight is towards bad behavior , because it really doesn’t matter the who because only the names have changed.
If it’s president Nixon or president Trump , they are love hating bullies.

And the more those who seek to hurt innocent people are secretly hurt themselves.
Perhaps there’s a little bit of that in each and everyone of us.
We know what it’s like to be bullied. And it sucks.
Bullies are not making any political point when they do it , they just get sadistic lust over
Seeing a crying face or seeing someone in a miserable situation or WORSE !
Every single evil act , thought , and speech has it’s roots.

Perhaps these are the kinds of people who need the most love but deserve it the least.

So how do we use love to conquer fear and hate ?

By building a culture of resistance. By popularizing anarchy ( meaning anarchism ).

Anyway you can. If local or global.

As an empath myself as I addressed in my online book
https://www.officialericcrooks.com/adults-get-bullied-too.html
Adults Get Bullied Too ! Which next year will mark the 10th anniversary of the tragic tale ,
The key points I’ve pointed out was to
NOT give attention to such bad behavior and to forgive from a distance.

But the very thing to keep in mind is this.
Hierarchy , Authority , Government , etc works hand and hand with these local bullies.
Perhaps it’s not even conscious . Because conscious bonding would be love right ?
No different than a neighborhood ran by illegal activity.
They are all going to take advantage of each other just like Fighting Fish in the sake tank.

Perhaps such authoritarian justifications are shown within the Animal kingdom but humans ( as of now ) are the most intelligent living creature of existence .
We can help those animals find a mate instead of animals fighting for one.
Same with food and a safe and cozy home when destructive weather takes place like a tornado .

We have the power ! Let our spirit guides help out as well.

Let’s vision a word where ALL HUMAN NEEDS ARE MEET from survival to socializing with good people who would never regret in trusting.

If it’s Law of Attraction or Libertarian Socialist Anarchism or both.

So when it comes to bullies , know this.
The more bullies don’t get the psychological help they need which is perhaps the only way they can cave in to the power of love , tears and all ,
If they don’t get the help we need , the more problems we are going to have.
And perhaps we need to take a look at these sciences and get rid of anything that’s pro-hierarchy .

The only things that have hierarchy in them that should stay should be the media of the past only being displayed as “ A Product of It’s Time “.

When I was a teenager , my question to the world was
“ What is this mess called adulthood , who’s responsible and how come no one is doing anything to clean it up ! “

“ When the power of love overcomes the love of power , the world will know peace “
_ Jimi Hendrix

“ Give Peace a Chance “ _ John Lennon

Someday , we can live life without fear and hate.
But it’s up to us.