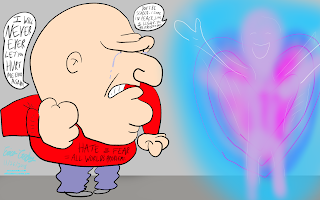 http://twitter.com/crooks_erica
Posted by Erica Crooks at 5:47 PM No comments: 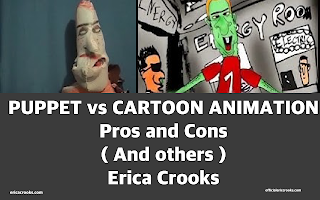 For those who’ve seen my work , I’m quite a multi-talented artist aren’t I . Lol
But putting joking Ego aside , lol

I’ve been interested in this stuff for quite a long time.
The Erica Crooks Show alone will turn 20 next year.

All that I say here is from personal experience as an independent filmmaker and multi-talented artist who’s never worked for Unions , Managers , Agents , Mainstream , or anyone else.

And this also comes from someone who’s invested her own money , time , blood , sweat , tears , continuing to perfect her craft all the time , never a competition date.

Pros :
_ Basically it’s making a doll look as cartoony as possible.
In a way , perhaps it relates to the origins of CGI today.
But it’s organic and at times can look more real than CGI characters at times.
It’s filmed in real time , and they can interact with humans .
Also it’s performance art , it’s acting , it’s live action animation.
So in a way it relates to all three and as low tech CGI you can possibly get.
Plus also there’s certain things that are funny about puppets and their movement which you don’t need to think about and it’s just improv , shaking and running insanely from the stomach upward as well as floppy arms for example.

Con :
_ If your trying to create a large cast of characters like The Muppets ,
It’s expensive.
_ Puppets wear out and need to be rebuilt / repaired .
_ How long it takes to build depends on the quality in how it looks / how it works / what’s your budget like.
_ Puppeteering is just like exercising . When you haven’t puppeteer in awhile , your arms are going to hurt less than 5 minutes. Some might develop joint pain or even needing to go to surgery relating to how much you’ve done it for. As well as how heavy the puppet is.
_ Cartoon Animation is unfortunately a lot more popular in the eyes of the puppet no matter how great it looks as puppets still get the “ kids stuff “ discrimination . Cartoons and Animation did until more Adult Cartoons came about during the 1990s.

Pro : If you got the skills , you invested in lasting computer equipment , you can pretty much do ANYTHING !
Con : Unlike puppets , you have to think about EVERY SINGLE LITTLE MOVE , even if you improved on the audio soundtrack. It’s like cleaning the mess while making a mess.
Animation is about thinking is slow motion , every frame matters because it creates the movement on film. Also unlike puppets , it’s hard to improvise during the performance . Perhaps it’s more of a planned and structured improvisation .
There are ways you can do lip-sync automatic sort of thing but I’ve tried that out from 2011 - 2012 , and it came out kind of crappy.
But technology changes.
Also digital puppet animation / bone animation can speed things up if you want something faster.
But of course nothing beats the quality of hand drawn 2D animation.
It just takes time.
That’s why the Entertainment Industry / Animation Industry always has overseas animation studios do it for them.

Comics :
Pro - All cartoonists pretty much know that this is the fastest way to produce someone of quality , that’s pretty much why editorial / political cartoons exist.
_ Comics are easy to distribute. Remember The Underground Comix movements in the 1960s ?
_ It’s called Comic Con / Comic Book stores for a reason and it somehow gets video games and pop culture stuff in as well.
And don’t forget the Cosplay .
_ People who can’t hear can enjoy it just as much as those who can hear.

Con : Some people prefer watching videos instead of reading.
There’s some people who can’t read well or at all.
Some people don’t even bother reading at all because they feel that it takes longer than watching a video even though it can be roughly the same time
Depending on their reading skills.
_ Sometimes film creates the illusion where you forget it’s a cartoon . Then again comics can do that too.

Pros : You can do pretty much everything just like animation. It’s pretty much literature acted out.
_ Before television , there was radio shows and movies.
_ Cheech and Chong albums and 1950s novelty comedy is hilarious.
_ Spitting Image and I Love Lucy were inspired by radio shows
_ Blind people can enjoy it.
_ Same benefits as music has.

Con :
Probably the least popular media form EVER which is why it automatically is installed in most cars now a days because people would rather listen to iTunes , Spotify , YouTube Music , Pandora , Online Radio , Amazon Prime , etc
_ Can’t see it.
_ People’s attention span would lose interest or not have any to it at all.
_ Public Access Television is more available than a mainstream version unless you got a college radio station or something.

Pro : The cheapest , fastest , media art form someone can produce.
_  Like drawing , It can even be written on a napkin with a pen.
_ Anyone can do it. But creativity can show depending on how well you express yourself with it.

Con : Typing skills might be a requirement depending on how much you write.
_ Sometime voice dictation writing is inaccurate.
_ PEOPLE HATE READING ! THE MOST #1 HATED MEDIA EVER !
_ Your friends will hate you for writing your emails and messages to them like works of literature and tell you to KNOCK IT OFF WITH BOMBARDING THEIR IMBOX ( personal experience ) .

All the above
PRO:
_ I live creativity and it’s my thing.

I just do them all . lol

http://twitter.com/crooks_erica
Posted by Erica Crooks at 1:40 PM No comments: