Erica Crooks Comics ( 2019 ) - The Typical Morning of The Ruling Class 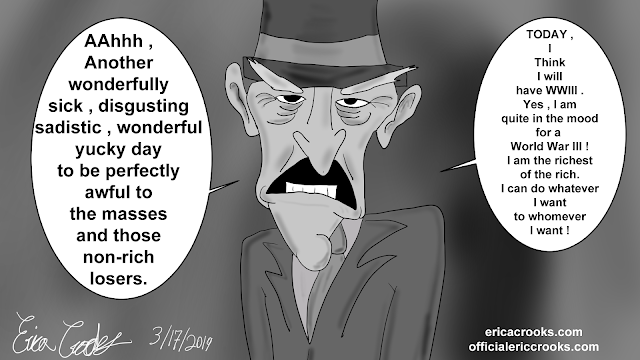 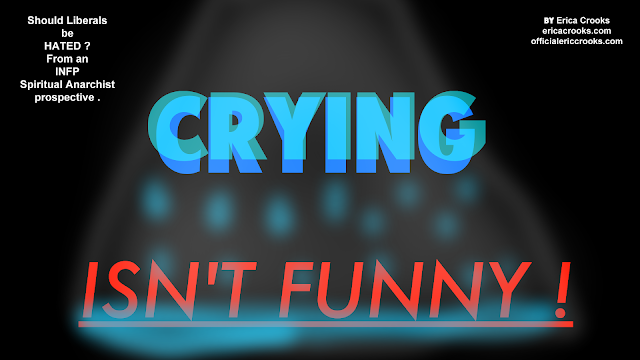 Crying isn’t Funny : Should Liberals
be
HATED ?
From an
INFP
Spiritual Anarchist
prospective .

When was laughing at someone crying ever funny ?

Yeah you know how people are on the internet.

I see humans but I don’t see humanity.

I am so sick and tired of the ignorance of this world !

Yeah sure , you hate liberals , why ? Is it because you are an iNtuitive and you know that people who side with hierarchy for the most part are sensors ? https://www.slayerment.com/blog/ns-are-smarter-ss-mbti
Because your a Libertarian Socialist Anarchist / Anarcho-Communist and you struggle to fill in liberals that voting DOES NOT WORK ?
Some have.

Or are you some Guru capitalist running a New Age cult who don’t think Good vs Evil duality exists and instead you judge those who feel sad or angry will all equally go to spiritual hell aka The Matrix which I don’t believe , reincarnation yes possibly but it’s not a bad thing.

Here’s the REAL problem. Hierarchy .
Hierarchy that can not be justified isn’t the sort that would give up so easily or at all.
It’s controlled by the EGO ! The sort of people who had horrible abusive childhoods and denies it !
https://www.youtube.com/watch?v=TdsRYRJD8H8&list=PLTQuxw8TiSNB3SfoTGCp7FniqCbmynZeq&index=59&t=661s

If there are people who are well aware of an abusive relationship or friendship , then why would they put up with someone telling them what to do ?

What Comedy Central DID NOT WANT YOU TO SEE !

https://www.dailymotion.com/video/x1ateib
The episode 201 of South Park was censored because Comedy Central feared someone would react to it and get hurt.

Basically it was a sarcastic yet unfortunate fact of life that hierarchy uses the magical tool of “ VIOLENCE “ to get whatever they want .

You see , The Government doesn’t protect you.

As a pacifist , I have a little hope in my heart that a non-violent approach is possible.
Even Noam Chomsky has put it being the only way otherwise we might as well kiss each other goodbye.
https://www.youtube.com/watch?v=VkH-cyuFPtc

Anarchists still hope that most and hopefully all good people will wake up to THE TRUTH or enough for a social revolution to happen.

Yes folks , this world is ran by sick people. When things are not going right , turn left.

So what about liberals ? I don’t see liberals as bad people , they are just ignorant.

I believe in uniting the left.

Who knows if an Anarchist Society / 5D Earth can happen in our lifetime.
But it’s better to work on building a new world in the shell of the old in anyway we can. It’s good to have love in our hearts and believe that dreams can come through Law of Attraction.

So with all the liberal hate , WHY HATE ? If anything it’s FRUSTRATION !
It’s like me reminding my mother I’m a 31 year old adult and she doesn’t need to do everything for me . ( ESFJ mom problems , I’m INFP by the way )

Finally in terms of the whole “ Butt-hurt baby lol “ crap

Finally I would like to add that I find psychology very important but in the matters of being good for people and encouraging people to gain higher self esteem and be the best they can be instead of just conforming to the status quo .

I think because people’s childhoods , that creates the blockages that New Thought / New Age Spiritual people talk about all the time which I believe as well as Anarchists.

So what’s wrong with Spiritual Anarchism ?

I think it’s a lot better than Satanic Anarchism which sounds like Anarchs-Capitalists / Right Wing Libertarian to me. And quite atheist. And hierarchical because that’s what low vibrational energy IS ! Hierarchical !

So why do people find suffering hilarious ? Sadism maybe.
And those who were taught more fear and hate than it’s ok to love and be happy and to enjoy freedom , probably see emotions as weak.

That would only equal to anti-social behavior and insensitivity , no empathy , no sympathy , only from an impersonal point of view without putting themselves in the shoes of others.

So that’s all I got to say for now on this.

P.S. Don’t ever feel ashamed to cry. If it’s happy tears , missing a loved one or while your doing your shadow work. It’s an expression of the soul and opening you up to venerability .
I know. I have a Twin Flame who became a Twin Flame Runner and we are both working hard every single day for 12 years to get together for Twin Flame Union. ( I highly recommend twinflames1111.com/blog )

And perhaps like a flower blooming , so is our awareness. Sometimes there’s guilt and shame from things someone has done in the past , even if they used to be a bully.
The tears show truth. It shows emotion.
But it’s aways good to be aware of your own soul. There’s more to life than the five senses.
And it’s ok to feel vulnerable when your happy. Especially when you are in love romantically with someone.

Posted by Erica Crooks at 1:43 AM No comments: