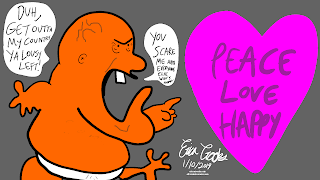 I'm so sick and tired of stupidity and ignorance , aren't YOU ?

Posted by Erica Crooks at 12:27 PM No comments:

When someone sees something good , smart , beneficial , my strongest suggestion is to spread the word of mouth. Get focused , dive into it , spread the word.
Sometimes the best ideas go unnoticed , undiscovered , etc
Just what in the world do we think we are doing getting social media accounts and asking people to like and subscribe ? So we can build such a huge community to the point where we earn an income doing what we love doing ?
Nice idea but I know an idea even better.
Further more , here’s my thoughts on why they are beneficial to humanity.

Libertarian Socialist Anarchism / Anarcho-Communism :
Screw hierarchy and it’s power over people.
It’s time for the people to govern their own lives.
It’s time to live life in love instead of fear.
Statism , Capitalism , Fundamentalist Religion , Right Wing politics are nothing but trouble and problems.
They have toxicated the most believed ideas from human nature to law & order.
Here’s Trump talking about building boarders against certain races of people ,
But that’s what hierarchy does , it builds walls , it builds fences . That’s what fear does to us.
We want to feel safe and secure.
It’s time to kick logic like a football , it’s time to swing that bat and hit that ball out of the ball park , it’s time to not allow fear to control our life.
Hierarchy is fear. If it’s a control freak who feels that they benefit off of controlling people through hierarchical systems like money and power or perhaps those in power feel powerless themselves.
If it’s some obnoxious abusive fascist cyberbully troll jerk on the internet controlling the innocent through fear tricking people into thinking they are nice and attack them when they least expect it or if it’s the same exact thing except it’s someone with money , political power and weapons of mass destruction.
Even though these kinds of people need the most love but deserves it the least ,
It’s the behavior that needs to stop.

“ Those who hurt others , hurt themselves. “ ( The Tale of The Bunny Picnic )

Law of Attraction / New Thought & New Age Spirituality
Yes we can create our own lives just by our own mood which is influenced by our emotional thoughts. Any time we have a thought there is an emotion.
Forget about what you were taught what was negative energy because that’s all subjective to the individual.
However I would advice people to recognize political ideology first.
There’s liberal spiritual people , there’s right wing spiritual people , capitalists , New Age Politics , don’t sound like New Age to me.
If we are going to shed human fear , GET RID OF HIERARCHY WITH ANARCHY !
That’s the liberation of the soul right there. :)

Personality Type science such as MBTI ( Myers Briggs Personality Types ) ,
Numerology , Astrology , etc
One of the biggest problems in the world that I most certainly observe is how not only do
People not understand each other but we don’t even understand ourselves sometimes or at all.
Now are there certain personality types that relate to the pure devine soul while others are a product of the psychological damage due to hierarchy , I have my opinions and others do too.
The point we need to recognize is all living creatures need to be treated as equals for who they are regardless.

But it can not be done through the system but outside of it.
A better life can be possible , but we need to do it without hierarchy.
No voting this time.
We need to unite the working class and make sure that most people can get the big picture.
If this raises more questions than gives answers than I strongly recommend people to do their own internet research on the subject from legit sources.
Not what the right wing think , not what your average friends and family think , not what the politicians think.

This should never ever be seen as the voices of youth ,
The voices of everyone’s best interest for freedom , happiness , health , prosperity , etc .

Many already know that enough is enough.
But everyone or at least most need to come to unity , mutual aid , autonomy , horizontal association , etc

If we really want a good life , and we want good to defeat evil ,
We need to recognize that love conquers hate and fear.
And the most evil people are trapped in the bondage of fear.

Those who want to use scare tactics want power over you.
Those who use knowledge to expose the truth to a happier and brighter future are using love.

This is not about shoving my morals and ethics down everyone’s throat ,
This is pointing out the truth of what’s going on.

The spiked Buddha Capitalism !
The iron thumb on the heads
of the proletariat!

As some of you already know , it’s the 50th anniversary for a lot of great things.
Especially Woodstock. But the 1960s did not end in the 1960s.
Look what happened in the 1970s with John Lennon’s activism , as well as the continued anger and hatred of Nixon’s Government which you have to admit was worse than Trump’s Government.
The 1960s may not have had as much support for the queer liberation movements like we see now ( unfortunately many supporting rainbow capitalism and celebrities aka working in the liberal centrist system ) ,
But that and such revolutions as The Spanish Civil War from 1936 - 1939 should serve as templates of “ WHAT COULD BE “ and “ WHAT WAS POSSIBLE “ !

Yes lightworkers can get the blues feeling that what they do
Is not effective.
But we got to remember that hierarchy is just like an oil spill in the ocean.
Ocean life depends on us.

Let me through out a current personal example out for you.
I have a Twin Flame , and since I’m the spiritual intuitive Twin Flame ,
That means it’s my job to help send love to my Twin Flame via telepathic communication
As well as mastering The Law of Attraction.
It’s been 3 years since our Twin Flame Ascension but I strongly feel that we are getting closer and closer.
Just recently I seen a recent picture of my Twin Flame smile which is very rare to me because
My Twin Flame is an independent model / drag king model and Butch Lesbian model sort of.
She mostly works through social media.
Also I recently heard about a creative life dream project she wants to do for an E rated video game and to prove to sexist / homophobic gamers that yes , lesbian gamers are just as equal to them.
That’s the thing about Twin Flames , there are these complimentary similarities .
So I sent her an email of encouragement ( Yeah I know Twin Flame Ascension and Separation , if I get an email back , it’s a miracle of Twin Flame Union. lol )
And the links to my social media stuff ( which I’m sure all of you dear readers know about )
Telling her “ see the similarities ? “

Anyway ,
It’s interesting how things go viral and popular isn’t it.
Business already knows that unfortunately a lot of independent opinion is stained by hierarchical brainwashing.
It’s time to help heal and liberate the spirit .

And for those who spread the word to the world , keep up the great work.
We are all in this together.

Before I end this blog post article , allow me to give some advice on how to spread the word.

Business does it all the time , Politicians do it all the time ,
We may not have the riches to do Google Adsense and Highway Billboards and stupid ways to promote ideas which annoy people more than anything.

I say the best methods to go about grass roots promoting.

And like I mentioned , I strongly recommend people to do their research on the different learning styles according to each MBTI personality type.
It’s easier to not think about it but wouldn’t we only attract like minded personality types and not so much non-like minded because those are the ones who think law & order and authority is the most justified , those people are the ones most fearful of life and side with the bosses.

But perhaps that’s just it ,
There’s people who are more scared so they wear an EGO mask and believe that it’s better to be feared than loved.

But no matter how violent hate and fear can get ,
LOVE IS THE MOST POWERFUL VIBRATION IN THE UNIVERSE !

TIME TO TAKE ACTION NOT ONLY EXTERNALLY AND EXTROVERTLY , BUT INWARDLY AND INTROVERTLY AS WELL !

Posted by Erica Crooks at 11:23 AM No comments: