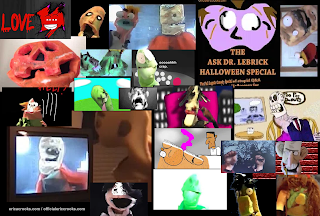 Watch The Halloween Playlist on youtube.com/user/officialericcrooks/playlists

http://twitter.com/crooks_erica
Posted by Erica Crooks at 8:57 PM No comments:

It’s not about “ This is the truth “ and this isn’t. It takes a little bit of everything as long as it’s not hierarchical.
I strongly suggest Personality Type science such as MBTI Myers Briggs to know yourself as well as those of others , as well as Libertarian Socialist Anarchism or perhaps Anarchism itself.
And I say mix this in with New Age / New Thought Spirituality.

The big problem that I see when referred to “ Elder Souls “ is this conformity of THIS IS HOW EVERYONE SHOULD BE ! I’m an old soul so I get the infant soul , young soul , mature soul ,
However ELDER SOUL I yet to question as well as some other things New Thought / New Age people teach.

Yes it is true that we can become whole within , but the problem is WE THINK IN PICTURES NOT WORDS ! Emotions as well. The five senses someone can use to see the outer world while there’s personality types that are closer to the spirit world more than others.

And of course the PROBLEM with words and the way people speak , would make sense to that personality type but not others.

For example if someone says “ Life is perfect the way it is “
As a lightworker , as a Heyoka ( sacred clown / mirror empath ) empath , An anarchist , numerology : 5 ! Heh heh um …. NO ! I disagree.

Seeing the innocence in people in terms of WE FEAR WHAT WE DON’T UNDERSTAND , that’s how we can forgive introverted inside ourselves and see that EVIL is hierarchy and ego.

So to justify authoritative hierarchical power over others I disagree.

That’s a huge problem when it comes to many New Age / New Thought spiritual people.

It all comes down to personality type. And I’m seeing more PRACTICAL spiritual people then Intuitive ones . I’m seeing more Accepting the way the world is instead of WHAT COULD BE !

And the thing is , I have had trouble second guessing myself and shoving myself in boxes which I know in my heart , body and soul that I do not belong.

What would be said as BAD KARMA , maybe it wasn’t. Perhaps I have spiritual ability and gifts to sense other people’s energy. No wonder I overwhelm myself. But being a satirist just makes Heyoka that much fun. It’s that inner child who sticks their tongue out at hierarchy.

So when people say that intellectualism is wrong , what the hell do they expect us to do ?
This ties in with the beliefs of death.

Sure we all sleep and rest. But who’s to say that spirits don’t float around and there’s more to the spiritual life than we know.

What if 5D Earth is possible with Anarchism ?

There’s nothing wrong with the philosophies and sciences , but perhaps we souldn’t set things in stone either.

But how could Anarchism dismiss both if people are free to do whatever they want !

If you conform to spirituality RULES that don’t feel right to you , your no different but a fearing religious person. No wonder you haven’t manifested anything.

Spirituality says CHILL OUT AND BE YOURSELF.

And the same can be said with the other two as well.

Be yourself , know that life can be better , and problems can go away.
That is , if you want them too. :)

Everyone wants to be happy. But happy means so many different things to people.

As long as it’s not hierarchy , as long as no one is getting hurt , no problem.

https://www.facebook.com/notes/erica-crooks/be-yourself-and-non-conform-even-if-you-dig-new-thought-new-age-spirituality/1670214163079295/
Posted by Erica Crooks at 1:15 PM No comments: