Posted by Erica Crooks at 2:26 PM No comments:

Netflix, Hulu, HBO Max, Disney+, Apple+, etc are considered the modern-day television.
We've noticed in previous months that new movies decided to premiere on digital home entertainment on demand instead of people going to the movie theatre cinema. Sure we see a revival to the classic drive-in but still , because of the internet age where ALMOST everything can be achieved by viewing a computer or LED HD Television screen , what does this say regarding home entertainment, movies, television, and yes ... even DVDs , Blu-ray , CDs, Print Books and Media, offline stuff for those who remember what I'm talking about. lol Plastic, paper, do I need to say more or should I keep explaining myself. lol
But seriously, would people NOT mind DVDs, Blu-ray, CDs, Print Books and Media, Television Cable and Movie Theaters disappearing while Spotify , Amazon Music, Apple Music / iTunes / Apple +, Netflix, Hulu, HBO Max, Disney,+, etc take it's place ?
Also what if it's not just to keep up with the advancement of technology. What if it's meant to stomp out leftist anti-capitalist / anti-copyright culture and politics ?
https://www.youtube.com/watch?v=2T2vuTCr1-o&t=2s
#anticopyright #anticapitalist #anticapitalism #classwar #classconsciousness #DVDs #blueray #entertainment #entertainmentindustry #movies #culture #art #television #streaming #netflix #hulu #hbomax #apple #iTunes #spotify #amazon #internetculture #movietheaters #cinema #homeentertainment #media #books #technology #internet #computer
Posted by Erica Crooks at 7:54 AM No comments:

How to Stop Toxic Masculinity

Toxic Masculinity is a political problem and has always been a political problem regarding social hierarchy, patriarchy, etc. Toxic Masculinity hurts men and masculine gender expressed identified people. Hierarchy is the root cause of political problems and Anarchism is the solution for a better world. http://anarchism.pageabode.com/afaq/index.html Hierarchy , Toxic Masculinity , The Patriarchical Authoritarian culture and society has proven itself over and over to being useless, destructive and deadly. Fear leads to Hate which will lead to Bullying ( which includes Cyberbullying ) which will eventually lead to violence. In fact, anti-social behavior is violence, anti-social behavior is crime. This society claims to make men superior but what it's really doing is brainwashing men to becoming minions https://www.youtube.com/watch?v=PjQ2B5cQ_gs&t=8s , which is why soldiers never protect freedoms but instead become political pawns protecting the interests of the capitalist ruling class. The world needs love but we live in a world of hate, fear, sadness and pain. It doesn't need to be like this, another world is possible. But authoritarianism , patriarchy , toxic masculinity has got to go ! Same goes with all bigotry, prejudice, discrimination, oppression, exploitation and hate. Including but not limited to Misogyny , Ableism, Ableism, Homophobia, Transphobia, Racism, etc. Enough Is Enough ! End The Hate , End The Fear , End Patriarchy , End Hierarchy , END TOXIC MASCULINITY !

Posted by Erica Crooks at 7:15 AM No comments:

Peace from an Anarchist

Peace from an Anarchist 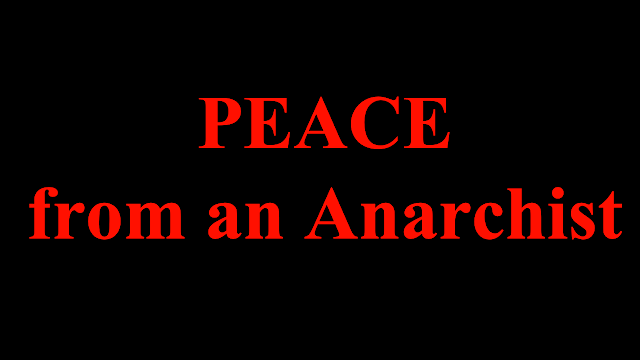 P.S. What’s going on with the riots I think is related to Insurrectionary / Post Left Anarchism and not necessarily Libertarian Socialism / Anarchy-Communism - Spiritual - Philosophical - Cultural - Pacifist Anarchism which is what I stand for.

Read this Article on

Posted by Erica Crooks at 3:20 PM No comments: