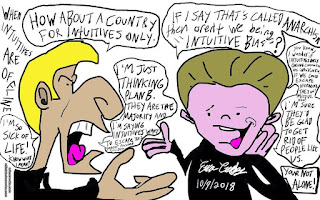 It not only relates to INFPs who are misunderstood and INFP light-worker idealist utopia
But also perhaps maybe INFPs are earth angels and perhaps the following is most connected to INFPs such as
Anarchism , Asperger’s Syndrome & INFP Idealist lightworker utopia

I’m an INFP myself and I see lots of patterns of this and it’s all good !

So if your an INFP , perhaps this maybe an interesting read to you and perhaps you can relate to something here a little bit. I can , that’s why I’m writing it . lol

Now I’m going to start off from an anarchism perspective but you’ll soon see how it all connects in theory.

Anarchism says no to hierarchy , iNtuitive Bias says don’t be harsh on sensors because they are not intuitive and to keep equality towards all personality types.
I had a thought on my mind last night and perhaps the night before as I was laying down completely soar and warn out from moving into my new apartment.
I’ve already talked about New Age / New Thought Spirituality / Law of Attraction and it’s positive effects and relation ( as well as the belief of The New World Order conspiracy theories ) to Anarchism as well as it’s negative effects if it’s NOT left wing politically or if it’s centralist .
I think I came across yet another contradictory .
I’ve mentioned previously that everything positive and negative has been tainted by attitudes that are not exactly against hierarchy and authority. Still can slide to left wing most certainly but in bits and pieces like liberals , state socialism and right wing libertarian.
This would include psychology and perceptions within science.
Pseudoscience is a very interesting word because just like “Special Snowflake “ it’s a slur against anyone who challenges the ruling class that’s dictated as a natural word to describe someone. Likewise it has used upon sciences that I believe are true such as MBTI , New Age / New Thought Spirituality / Spiritual Gifts / Spiritual Abilities , Astrology , etc.
That’s like if someone through the wrench in someone’s face and used “Pseudoscience” to justify prejudices , hate and fear against anyone who isn’t a cisgender heterosexual right wing stereotype.
http://anarchism.pageabode.com/afaq/secB1.html#secb14 ( I recommend the Anarchist FAQ relating to what I just said )

Perhaps in this article I’m going to go beyond iNtuitive Bias. But the thing about iNtuitive Bias is a very interesting topic of discussion relating to Myers Briggs Personality Types and also it’s the ultimate taboo which would get you kicked off of any MBTI Online Community ( message forums ) reddit ’s MBTI online communities , etc.

But still there’s some who manage to speak up about it independently if it’s just pointing out the facts of the personality type science
https://www.youtube.com/watch?v=zba9jnEOQqw
( Resource : slayerment.com )

To the point being made that since intuitive are the minority , they just want somewhere to escape the hierarchy of a “ Sensor catered society “ .
https://thoughtcatalog.com/heidi-priebe/2016/03/7-reasons-why-the-mbti-community-is-dominated-by-intuitives/

And as an INFP myself , I can relate to that myself.

I too did my own blog video about iNtuitive Bias
https://www.youtube.com/watch?v=4uOz-K9Qcqw

As well as a cartoon comic strip relating to just that feeling that iNtuitives just want a place of their own. ( picture above at the beginning of this blog post )

Relating to this similar feeling in which perhaps us intuitives can relate to ET wanting to phone home. There’s left wing New Ager’s that want a 5D Earth , Anarchists want a Free Society which Anarchism would solve all the worlds problems , and I can relate to these as well .

I’ve mentioned and discovered something very interesting I picked up right away when I went to a neurologist to see if as an adult , would I still qualify for my Asperger’s Syndrome diagnoses which I was diagnosed early in childhood. This ISTJ / ESTJ personality type / RIGHT WINGED / Fundamentalist Christian Neurologist only gave me an even longer list of diagnoses including Gender Identity Disorder / Gender Dysphoria due to me happen to be BORN THIS WAY “ Transgender woman “ . I looked at him and said “ You know , just because someone is different from you doesn’t make them evil. We are all different but we are all the same. “ I perceived this person to be not only hierarchical , thinking he was superior to me but also very rigid and not very bright.

That’s when I knew for a fact that the Neurological Test is BUNK !
It’s ANTI introvert , anti intuitive , anti LGBTQ , anti left wing , anti New Age spiritual ability and gifts . And I protested the hell out of this guy as nicely and passively as I could , but I did eventually raise my voice to point out just how wrong he was. It was a nightmare , pure hell.

But I know I’m not the only one. I rarely ever talk about this , if at all. But I often wondered if Asperger’s Syndrome had any link to iNtuitives ? I have been to several Asperger’s Syndrome meetings for adults. Meet two false twin flames there ( meaning they are NOT Twin Flames , but it’s a usual situation that Twin Flames might go through in life like crushes or bad relationships with sociopaths before meeting Twin Flames. Fortunately I survived not losing my virginity to anyone. ) . It’s really hard to say . I have a friend who I’ve been friends with for about 20 years ( we knew each other since childhood at school ) and he has high functioning autism but I think he’s an ISFP .

Still , I do see there’s a pattern not only in the Asperger’s Syndrome diagnoses that’s related to iNtuitives , especially introverted intuitives such as a lack of a social life and an obsession of interests .

Ever heard of a website / message forum called “ Wrong Planet “ ? Alex Plank who runs it according to MBTI online forums I’ve read , some intuitives think he was an intuitive. And even the title “ WRONG PLANET “ relates to my comic and what I said about an iNtuitive utopia. Perhaps it’s all connected to Anarchism and 5D Earth , which isn’t a bad thing , just tell me where it is and I’ll move there.

There was something floating around the Aspie Community known as “ Aspergia “ which was a tale about certain kinds of people who used to live in harmony on an island who ended up being washed up to the sensor catered / hierarchical society.
Again this is related to what I just mentioned.

For many years , I never understood why I was looked upon as being “ MENTALLY DISABLED “ . But there has been intuitives that have spoke about it in recent times in some way or another.

This was a very interesting discovery to me , because as I mentioned that I thought I was alone in life when it comes to this.

IS this the workings of The New World Order / Ruling class ?
Of course.

And of course here’s what’s interesting about the whole Adam and Eve thing , if Eve was Left Brain and considered to be the sinner , she’s an intuitive. Also it’s sexist and patriarchal .
https://in5d.com/the-secret-meaning-of-the-tree-of-the-knowledge-of-good-and-evil/

Some might think this may be the unrealistic frustrations of an INFP ,
Well guess what ?
EVEN JOHN LENNON RANTED ABOUT IT !
https://www.youtube.com/watch?v=cCTdKrKepYE

I have addressed in a previous blog post that there’s no such thing as an evil personality type , just mental illnesses that are toxic to self and others such as personality disorders. I say that if we aren’t hurting ourselves and others , no problem.

But even though I have indeed addressed there’s so such thing as an evil personality type , there are certain ones who would obey and accept hierarchy more than others.
http://anarchism.pageabode.com/afaq/secB1.html#secb15

As I mentioned before , some personality types are more closer to spirit than others.
Ones more head in the clouds while other types are more grounded to Earth.

INFP is without a doubt the most illogical thinker in the world and probably the most hated of the lefties .

Now perhaps this post is controversial but sometimes things need to be discussed.

And I’m not trying to say that INFPs are superior and everyone else is inferior because THAT would be Hierarchy.

I’m talking on a scientific level here . If New Thought says to think from the inside out not the outside in , if the LGBTQ+ can destroy and shatter the norms about gender , sexuality and identity which hierarchy tried to simplify and justify with the gender binary system , and Anarchism / 5D Earth / The New World Order ( from a left wing prospective ) can expose the fact that hierarchy is evil as well as how ANY EVIL human being is linked to “societal conditioning “ which the hierarchical systems creative anti-social behavior ,

Is it just coincidence that there’s certain personality types if intuitive or sensor justify hierarchy ?

As I’ve addressed in my blog video on Unhealthy INFPs https://www.youtube.com/watch?v=jhSIpkQ-Gfk

There’s most certainly some kind of bias going on against INFPs .

Is it just coincidence that I asked the question if INFPs were indeed healers and light workers and Earth Angels here to help HEAL the planet ?
https://www.youtube.com/watch?v=JRPeaRhUf9c
If so , then how come this is attracting so much attention ?
It’s speaking to lots of INFP that can relate to it !

AND IF WE ARE ALL ONE , does this mean Angels are INFP ?

IF SO , this answers everything does it.

I’m basically putting out a theory out there , what do you think ?

Posted by Erica Crooks at 2:32 AM No comments: