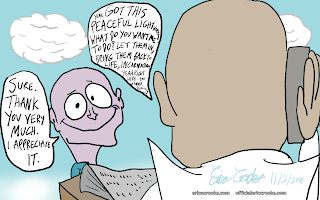 Too Peaceful ?
by
Erica Crooks

I received an interesting invite to join a local Transgender Liberation Rally ( aka #WontBeErased ) . And of course this is such a great opportunity for anarchists since Anarchists do indeed help out on single issue protests and of course being a Transwoman myself it sounds like a perfect opportunity for be to put my anarchism into action , or perhaps direct action in terms of awareness . However ( sigh ) even though I have a lot going on right now ( at the time this article was published ) https://www.youtube.com/watch?v=zuLvPY_dBCQ ( Blog Video ) . Nothing horrible , unless I want to mention still working towards Twin Flame Union and replacing my laptop which is kind of a last minute punch in the wallet. lol Especially next week I’m moving into a new apartment and the typical pain in the neck “ EXCEPTION “ . I already went through 2 of them last month. Anyway , I already said enough about my personal life on the blog video.

Let me talk about anarchism and protest for a second. It’s such an important aspect in not only anarchism , but any left wing politics relating to the working class masses . And the thing about being a Twin Flame / Lightworker / Empath / Old Soul / Starseed / Indigo Crystal / Heyoka Empath etc …. Basically since meeting my Twin Flame and my spiritual awakening since 2016 , I just can’t seem to get as angry as I once was. And I had an extremely angry childhood. The weird thing about me is when I hit my 10 year anniversary birthdays , I’m 30 as I write this going onto 31 next year , I reflect as the old soul I am. But my perception of Anarchism hasn’t changed , I’m still an anarchist. However perhaps the whole being in the crown and protesting and trying to get people into anarchism , it’s harder social wise. It’s probably because i’m an introvert . INFP .
I do a lot better being a “ Cultural Anarchist “ . I filmed a blog video today regarding Anarchism and Personality Types https://www.youtube.com/watch?v=qGKua-Msfxk , basically pointing out that certain personality types are more nationally open to the idea of anarchism and seeing all the possibilities than others who would struggle to understanding and take it seriously depending on their personality type and cognitive functions. As well as of course authoritative upbringing. I’ve heard from time to time ones who live in liberal families that end up becoming right wing but to me that’s very unlikely . The other way around being raised right wing and being more left wing , that was most certainly my early adulthood .

I still need to read and study more , but for me , I’ve mentioned that I’m someone who won’t necessarily feel comfortable bringing in a black block risking going to jail and court , being a member of Antifa , and now being a protester ? What gives ! lol The way I see it is this , as long as we are helping about spreading awareness in our own way , we are helping “ Building The New World In The Shell Of The Old . “ Now the other anarchists and what they do , as well as other leftists protesting even if they are centrists and liberals encouraging voting and so forth , even though I’m all in favor of anarchism , my perception is UNITE THE LEFT and UNITE THE ANARCHISTS even if it’s spiritually because technically WE ARE FIGHTING FOR THE SAME EXACT THING !

Maybe it sounds wimpy and perhaps even hypocritical of me , but I’m probably one of those who tends to work behind the scenes sort of speak. Which isn’t necessarily a bad thing .  Extroverts seem to be those most likely to go out there and kick butt while introverts tend to other things but against still fighting for the same cause.

I seriously think that many introverts , if not , ALL happen to be great at online content.
Eventually I got to make a list of my favorites.

I really enjoy the idea of bringing lightheartedness into things. Almost like relief and healing with the arts . Kind of like giving someone who fights hard a nice cold drink of water. Something to joyfully regard their batteries and charge up their spirt .
There’s a quote I enjoy : “ Art Should Disturb The Comfortable and Comfort The Disturbed . “

I think my Twin Flame is very similar. I just emailed my Twin Flame tonight mentioning all this. My Twin Flame performs as a Drag King at Pride nightclubs and around the time when the news headlines broke out about the Pulse shootings in Florida in the summer of 2016 , My Twin Flame performed at a fundraising event that helped raise money to help the victims. I remember that Christmas at a Holiday Party I complimented her on how nice that was of her.

Also relating to all of this , it’s pretty much how I got into anarchism and even interested in politics and satire. Pop Culture still do this say is such an influence on me.
And I feel that independent film and art can be just as popular and influential as a force of good for all of humanity and even the world , perhaps the Universe too for good measure .

Also as a Heyoka Empath ( Sacred Clown ) , perhaps that’s why I choose satire as my form of direct action.

It not only entertains , it makes people think .

And even though it’s legal for now , how much more will it stay legal.
Remember , Charlie Chapman was kicked out of the country wasn’t he ?
There’s a clip from one of his movies which I’d really like to check out more of his speaking films. The clip is called “ Anarchist Kid “ and I’m just so amazed that something like this existed at the Golden age of motion pictures . Likewise , the first versions of George Orwell’s 1984 and the Animated Feature of Animal Farm . And no , it’s not animated by Disney , remember the red scare and all the Disney strikes around that time , and how these used the clowns of Dumbo to mock the leftist ex-animators and ex-cartoonists that got fired from Disney ?

Donald Trump can say all he wants about the FAKE NEWS liberal media and Ajit Pai can do whatever he can to shut down the internet and revive it as one big NetFlex .
But it ain’t going to work !

And as The Anarchist FAQ points out , these single issue protests DID HELP OUT A GREAT DEAL piece by piece and it was truly the left that made these freedoms , not the right wing.

And even though people are fighting to make sure these freedoms stay legal , keep in mind , whoever is in power can do whatever they want.

People are already pissed off at Donald Trump for acting like a dictator . But he could be worse . Like The Illuminati , if they wanted to proceed with The New World Order , they can.

I’d like to conclude something that Noam Chomsky said.
Someone asked him about violence in an Anarchist revolution.
And Noam Chomsky answered with It’s either going to be peaceful or we’re going to have to kiss each other goodbye. Because even if Anarchists think they can fight with weapons , The Government and their violent power of imperialism , they can easily wipe out everyone.
Ok , I’m not going word by word here. Just from what I remember from what I’ve seen in a video of him talking about it.

And as a pacifist Anarchist , I do agree. I’ve always been anti-war anyways.

Perhaps it's because I'm a
INFP Lightworker . lol
https://www.youtube.com/watch?v=JRPeaRhUf9c

For more check out

Posted by Erica Crooks at 8:02 PM No comments:

http://twitter.com/crooks_erica
Posted by Erica Crooks at 9:58 AM No comments: