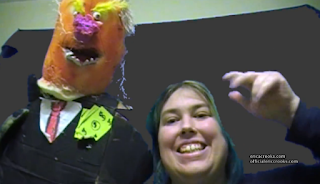 I got word that Trump and his hired goons ( or perhaps they are all hired goons ) wants to get rid of Transgender rights. Normally I don’t pay attention to the news , unless it’s everywhere , unavoidable and can relate to me , my like minded people and humanity in some way.

Here’s the thing about transphobic bullies . Just like any bully , most of the time they are going to be a load of talk. They will do whatever they can to ruin you , perhaps even dedicate their own lives to bringing you down probably because they don’t have one.
Learn my life at it’s worst 10 years ago : https://www.officialericcrooks.com/adults-get-bullied-too.html .

But just because it didn’t happen to me doesn’t mean it doesn’t happen at all. I’ve heard about murders , suicides , even afraid of coming out , perhaps being forced to conform into a gender that matches the body the world sees fit while the soul is hating themselves and just wanting to DIE . I’ve had people not see me as a woman many times even laughing at me thinking it was a joke or thinking that my so called delicate little feelings down matter to anyone but my own , like I’m all alone being the only transgender person on the planet which isn’t true. I have lost a friend who was a transgender woman who committed suicide and was surviving out of her car and working as a prostitute and a house cleaner. I remember asking her before she died if that’s something she really enjoys doing ? Selling herself to some Pimp ? She told me it was the only way she can have enough food to eat . Also she was passing away due to unknown health issues. She written a biography but the original master was sent to a publisher who threw it away.

I’ve heard stories of trans people getting into addictions and ending up in hospitals. Even I have almost taken my life away through out my life , even in childhood. I know what it’s like.
Perhaps my loves and interests in my life , my art , knowing I’m not alone , my passions , my life missions , law of attraction , anarchism , seeing the truth of what's really happening in this crazy world is why I didn’t take my life away 10 years ago.

When ever I hear right wing religious people and right wing people themselves saying that suicide and depression is a sin , that and homelessness and poverty should be laughed at getting the “stupid” label , that makes my blood boil.

Sure I’ve done suicide gags in my dark comedy puppetry and animation but to me what makes it funny isn’t that itself , my art reflects life. Not some right wing brainwashing and a bland mainstream media garbage that tells people to ignore stuff in life and just focus on you and only you.

There's reasons why people can’t take direct action in self defense and help people in certain areas , or even be 100% independent. The Law . Hierarchy .

In 2017 , I became an anarchist shortly after an experience where a transphobic judge won’t help me get a restraining order on a transphobic bigot in my neighborhood as he was getting everyone to turn against me for being trans and lesbian and queer. “ The neighbor is just like this court room , TRANSPHOBIC ! “ I was in a position that they could have sent me to jail ( The WRONG JAIL ) just for being the protesting hippie that I can be. Pounding the platform , hating the court system , Literally PROTESTING AGAINST THE JUDGE who wasn’t on my side.

I went to this neurologist doctor just to do a reevaluation since I was diagnosed with Asperger’s Syndrome since I was a kid . I ended up getting a bunch more including them. The doctor even told me to my face that I have Gender Identity Disorder. And I responded to him with “ Just because I’m different from you and the rest of the majority doesn’t mean I’m evil. And you know what ? Vise Versa right ? Just because we are different , WE ARE ALL DIFFERENT , But we are all the same. “ And of course , he was thinking I was saying that he told me that I was evil. I was being philosophical just doing my lightworker mission. Hoping I can bring peace to this STJ personality type Right Winged Fundamentalist Christian Neurologist .

I don’t shrug stuff like that off that easily. I inform my local activists . And as a satirist , I do what I can with satirical humor and entertainment which literature art doesn’t only entertain people but makes them think .

New Age spiritual people are similar to Anarchists because they know that people are programs to respect abusive authority and hierarchy. However each spiritual people differ from politics even if they claim to be apolitical. Just match it up with the MBTI Personality Type in my opinion.

Trans Anarchists / Queer Anarchists and Anarchist Feminists Are totally trans friendly. And they are the people I feel politically who know what they are talking about and they are the smartest when it comes to LGBTQ+ politics. Even Libertarian Socialist Anarchists are the best allies for LGBTQ+ . Maybe they are on the most extreme side of left wing politics when it comes to Anarchists but to me , there’s so such thing as balance and centralized crap. It isn’t about “ America is splitting into two , America is becoming divided as a country.”
Politics have ALWAYS been that way.

And furthermore , has voting really did anything ? It's like “begging tickets” right ? We are asking Trump and the Government nicely . What if this whole getting rid of Transgender people and perhaps soon all LGBTQ+ as a whole is just a manipulative game of “ Narcissistic Abuse “ or He’s going to be the fascist dictator who’s going to turn America into a Totalitarian one.

Let’s face it , The American Constitution , The Bill of Rights , The Decoration of Independence , and similar documents from so called “ Free Countries “ .
It reminds me of the WWII cartoons “ The Ducktators “ and Tex Avery’s first MGM cartoon “ Blitz Wolf “ . A Fascist would sign a contract for peace , but at the same time THEY COULD BE LYING TO YOU AND WOULD GO BACK ON THEIR WORD !

I don't think there’s a right way or wrong way to do it if everyone is on the same page for peace.

Trump is Richard Nixon and all the dictators. He’s not very likable. Perhaps he’s someone who needs the most love but deserves it the least.

But as an Anarchist , I strongly feel that No ONE Should be the hierarchy over ANYONE !

So , what is the solution ?

Everyone is gong to do whatever they can to side with Transgender people as long as they deeply care in their hearts and are NOT doing it for personal income or to boost their ego.

It’s interesting because if Trump wants to get rid of LGBTQ+ people , why is there a “ LGBTQ people for Trump “ shirt on his personal website ? To take advantage of people for votes of course.

The only reason why people vote is because they fear authority and hierarchy. Would people be even more submissive in a totalitarian setting ? Where people have ZERO freedoms ? Technically it’s like if your rich with a lot of money , you can do anything.
So let’s get rid of capitalism for good measure so we can all be prosperous.

It would be ironic if Trump did this because of Transgender satirists such as myself took the piss out of him. lol

He’s the kind of guy in which if he’s not happy and being worshiped like a GOD , he’ll make your life a living hell.

Maybe there’s spiritual people who can meditate and be fine in jail , but that seems very difficult to do.

Perhaps that's a non-romantic example , so here’s a romantic example.
There is such a thing as transgender people falling in love . Some get married . Some are happy with their long time relationships . And their partners can be just like them , any sexual orientation . They can also be trans or cisgender .

I have a cisgender lesbian Twin Flame by the way. :)

“ WHAT IF THEY WERE LIKE ONE OF US ? “ Maybe they num it out with their minds with addictions and money and power.

" When the power of love overcomes the love of power , the world will know Peace. " _ Jimi Hendrix

“ Our society is run by insane people for insane objectives. I think we're being run by maniacs for maniacal ends and I think I'm liable to be put away as insane for expressing that. That's what's insane about it. “ _ John Lennon
In conclusion , if you want to know why sexism , homophobia , transphobia , racism , all forms of discrimination exist at all then I strongly recommend
“ B.1.4 Why do racism, sexism and homophobia exist? “ from “ The Anarchist FAQ “

P.S. If you are going to put Antifa down , just remember there's LGBTQ in Antifa , including transgender Antifa members . Even though I'm antiwar , just learn about the motivations of anarchists before judging their actions. It's not the actions I would take , but I do understand their motives of what they are trying to do.

Posted by Erica Crooks at 8:13 PM No comments: