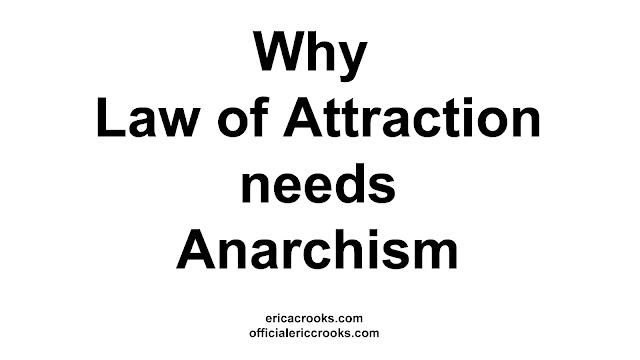 Why Law of Attraction needs Anarchism

If you have seen my articles and blog videos before , you probably know that everything I say I already covered already. But perhaps I left something out or perhaps as time goes on I can say things in a different way than I did before.

And perhaps our feelings matter more than our thoughts and words , not everyone’s definition of something is going to be the same.

I got into The Law of Attraction / New Thought / New Age Spirituality back in 2012 . At the time I was starting to take my telepathy of my Twin Flame seriously realizing that this was a real spiritual entity I am communicating with every single night and not a pretend girlfriend.
In 2016 I finally meet this person face to face and currently working on my Twin Flame Reunion since then. It’s a daily thing.

But here’s a thing about me. I’m a lightworker and I’m an INFP.
Perhaps I can manifest what I want for my individual life but what if I wanted something not just for myself but the whole world to enjoy ?
As an artist , as a truth seeker , as an Anarchist.

Some lightworkers have a very special mission in life. LOVE ! Self Confidence !
Being a teacher of Law of Attraction ! Helping people out of poverty !
While there’s some lightworkers with bigger mission than others.

We can’t just go around denying our frustrations with the world.

Take a look at this video of a lightworker , I can so relate.
https://www.youtube.com/watch?v=lIYdDWvsXE4

As I addressed many times in my blog articles and blog videos , the big problem I have with many teachers of The Law of Attraction / New Age / New Thought / 5D Earth / Spirituality is their politics.
Law of Attraction and Spirituality is very important . However when you ignore all other truths about “ Why the world is the way it is “ or perhaps being indifferent about it , not only does it alienate you from life but also yourself.

I got into The Secret since 2012 , however I got into Anarchism in 2017.
So yes , there was blog videos and stuff where I believed in things I shouldn’t have.

From 2013 - 2014/2015 , I was a member of the Bob Proctor Streaming Club / Bob Proctor’s Six Minutes to Success.
Bob Proctor is great about self esteem and philosophy , and I would consider him to be ( right wing ) Libertarian / Anarcho-Capitalist , NT personality type of some sort .

However it was THE TRUTH about capitalism that I didn’t know anything about until recent years.

Bob Proctor in The Secret talked about how the 1% earns all the money thanks to Law of Attraction .
I had absolutely no idea the 1% rules the world are sociopathic monsters and the only reason why money exists HAS NOTHING TO DO WITH PROSPERITY BUT POWER OVER OTHERS aka HIERARCHY !

A lot of these kinds of teachers will make you believe “ When you are Rich , You can be a good person or a bad person . “
But no one talks about wage slavery !

Artists and people I admire are pretty much left wing and a part of the working class.

It is true that Jim Henson owned a company of hundreds of artists and had several homes and vacations , but he was no capitalist. He was going to sell everything off to Disney possibly to go back to his roots. He knew that he was an artist first and foremost.
And he never acted like a boss and was equal to all he hired who were also his friends.
This is extremely rare for anyone who owns a business.
Frank Oz even made a documentary a few years back “ Muppet Guys Talking “ .
The reason why Jim Henson got into business is because he knew THAT WAS THE ONLY WAY TO SUCCED AS AN ARTIST !

And a lot of people think that way even though with the internet and how you can buy pretty much ANYTHING and do it yourself and just having the ability to do ANYTHING you want to do and become.

So anyway , I went down a rocky road of trying to figure all of this out before I got into Anarchism. I was rejected by Comedy Central , [ adult swim ] , Mondo Media and even Troma Entertainment .

Here’s the thing. If I want to succeed as an artist and become right and famous , then my mindset would need to be about becoming prosperous through capitalism and not ART .

NonCompete has made a great point with this video about that as well as science .
https://www.youtube.com/watch?v=TKoiAXX6KFs

I have meet artists who only cared about succeeding in business but just didn’t know how.

I hate to seem like I’m playing devil’s advocate here but I’m just saying this IN THEORY !

If my calculations are correct thanks to the MBTI , you reach to the majority of personality types which is an Extroverted Sensor society.

The ruling class did it for you already , all you do is dumb down everything , make everything the “ status quo “ ,

I’ve talked many times of why I think Law of Attraction needs Anarchism.
If you want the best , focus on the best.
BUT people don’t realize that the system is trying to keep us away from what we want !

So here’s the big question .

Individual Self-Concern
Do you only care about having the best life for yourself to the point where you do not mind taking advantage of people in order to achieve it ?

Collective Self-Concern
Do you also care about yourself as well as your like minded people and humanity and wanting nothing but good things for everyone ?

MONEY IS NOT A GENUIS INVENTION ! It’s a SLAVE TOOL that chains our human needs.
If everyone’s needs were meet , people would work out of joy and that is why I am an Anarcho-Communist.

So when you do use Law of Attraction please be mindful of what your thoughts are.
We need that balance between happiness for yourself as well as others.

My problem is I’m so self-less that I think more of others than myself. lol
I’m working on it.

Posted by Erica Crooks at 4:22 AM No comments: