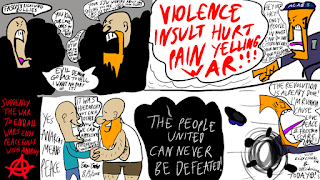 Let me just say that in my life , I never set out to have an interest in politics.
Philosophy and wisdom are much more my cup of tea.
But when iNtuitives ( MBTI / Myers Briggs Personality Types ) are 20% or less in a Sensor Majority catered world ( 80% ) or more , when one is of the LGBTQ+ , etc left is the only way to go.
If there’s something that really makes my blood boil , it’s just seeing not only how the right wing wants to dominate everything but trash anything that’s left wing so it would work in their favor.
This includes New Thought / New Age Spirituality and capitalists that cash in on it and calling it “ entertainment purposes only “.

I don’t like to call myself an American , I may have had liberal leanings in the past and perhaps still do as a pacifist , but when I became a libertarian socialist anarchist , it was literally like
I WAS GUIDED BY SPIRIT ! And how interesting it is as an INFP Light-worker to be guided to Anarchism where the more I evolve in my life , the more and more of a minority I become.

So with my spiritual awakening , I was starting to see beyond what I did previously and I actually did think that I learned as much as I could trying in on how psychology relates to people’s miserable lives. And of course with Law of Attraction even though I do agree that yes we do attract or own lives but libertarian socialist anarchism showed me a missing piece of the puzzle. The New World Order kind of hints the same thing a little bit . https://in5d.com/who-really-runs-this-world/
https://www.truthcontrol.com/new-world-order-guide

But perhaps it’s all connected. http://anarchism.pageabode.com/afaq/index.html However
I feel Libertarian Socialist Anarchists know the answer which is simply get rid of hierarchy.
Obeying a spiritual guru could be seen as hierarchy if they fail to explain their teachings with spiritual terms that only a few would understand and charging lots of money as if they were your savor while denying it.

As a satirist , perhaps satire is what got me interested in politics as a way to make light and heal the world by mocking what people take too seriously.
But when I became an anarchist , I realized that satire is indeed NEEDED IN THIS WORLD !

There’s a quote I can relate to that goes like this .
“ Art should disturb the comfortable and comfort the disturbed. “
And that’s pretty much what I do as an artist and what I do in general.
Must be relating to me being the Heyoka : Empath .

If you look at a political spectrum chart that isn’t in favor of the right making the left look evil for no reason but to brainwash the masses as usual ,
Or even if you did your research on Left Wing and Right Wing politics ,
It’s obvious who the evil villains of the world is.

And it’s not like I go ranting on how bad Right Wing people are because I never talked and LISTENED TO THEM , far from it.
I had a crush in college on this tall Conservative Catholic girl who happened to have Asperger’s Syndrome ( this was like 11 years ago ) and today she’s homophobic so no way in hell could I be just friends with her.
Also I’ve meet right wing lesbians ( who were old enough to be my parents )
And even my father and his equally psychotic wife was right wing.

I already said enough about my Dad and his and his wife’s abuse.
https://www.officialericcrooks.com/adults-get-bullied-too.html

On a moral level , there can be appreciation.
Unfortunately they are brainwashed and wrong about EVERYTHING !

But going back to the whole idea about political devision ,

When people talk about political devision , what they are trying to say is they just want people to get along. Who doesn’t want that.

But this is sort of a liberal thing , isn’t it ?
You know what you want and you rather take LEGAL action instead of being open minded of alternatives as well as doing your research questioning WHY certain things HAPPEN .

In my opinion regarding political devision , it’s like one of those terms used by centralists and right wing people that mean that they want people to suck up to the status quo .
They love hierarchy , they love capitalism and the state , it’s either there way or it’s illogical.
Hierarchy has a new game. Instead of give your soul to God or you’ll go to hell in the lake of fire religious scare tactic approach , they lie about human nature but with the same recycled idea that “ all humans are sinners “ .

Okay , so what if political devision went all the way to “ it’s extremes “ ?
ALL THE FREAKIN’ WAY ! As far as you can go politically.
What would you find from each side ?

And for Right Wing ,
HATE AND FEAR ! That’s all I got to say. lol
And it’s like a calm narcissist or a violent terrorist.
In fact , I don’t even consider right wing politics to be real politics at all.
They are all for tradition , economics , Law and Order ,
All the useless hierarchical junk that keeps people in bondage under the political slavery and lies of the status quo.

I don’t know if I said this before , but I can picture system electoral politics like a dysfunctional family sitcom.
The liberal is the ignorant one who just wants people to be nice and get along.
And yes , I admit that I did have liberal leanings in my life.
But once liberals say SATIRE IS MEAN , intellectualism is MEAN, HOLD THE PHONE !
It’s probably not fair of me to say that liberals are unintelligent . I’m just saying in that situation where anti-intellectualism in time of need , cooperation and well UNITE THE LEFT , yeah that’s difficult but there’s innocence there.

Right wing people may be more tough but they are filled with HATE AND FEAR !

It’s like the liberal is your younger sibling and the right wing is like your older brother who sides with your abusive father and always abuses you and your mother who’s probably apolitical is your only way to escape the horror .

But of course I would side with liberal if I had to pick the two.

It’s just that , well …. Maybe this relates to being an iNtuitive .

https://www.youtube.com/watch?v=zba9jnEOQqw
I’m sure most of the MBTI Online Community seen this video.

Which can relate to politics most certainly.

I’ve made a video about iNtuitive Bias and I think I’ve mentioned how it relates to politics.
And if this gets people pissed off , help end hierarchy.
https://www.youtube.com/watch?v=4uOz-K9Qcqw

Posted by Erica Crooks at 2:09 AM No comments: