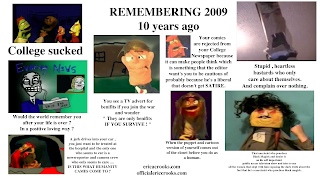 Remembering 2009 ,
the final season of The Erica Crooks Show to air on Public Access Television and final season until 2011.

Why is the world so screwed up ? 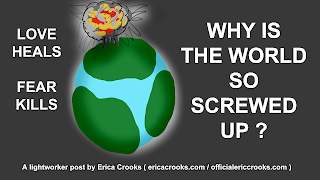 Ok , so I’ve been feeling kind of sick and down this weekend. And whenever I do , it doesn’t stop my intuition one bit. One time I did a blog video which I had to end up turning into an audio blog video because ooze kept dripping from my nose. Technically and to be honest , I tend to feel much better with the written blogs than I do with the video blogs. I work two ways. Sometimes I just have an idea that I know needs to be heard ASAP and that part of me that needs to keep reminding myself quality over quantity , then I spend more time in developing the idea and sort of abandon the idea.

Anyway. There’s a thing called The Dark Night of The Soul . Perhaps all high vibrational empaths and lightworkers get it from time to time. If I’m understanding it right , it feels like a depression but it’s not about you.

In many of my previous blog videos and articles , I talked about a problem that I kept seeing in the spiritual community which was on the lines of more individual self concern and screw collective self concern. Bob Proctor for example can teach wonderful wisdom and recommend lots of great books relating to self-esteem and law of attraction. Including the stickman theory.
However he’s pro-capitalist. Likewise there’s some Anarchists out there that dismiss not only Law of Attraction as hierarchical bunk but also “ All Conspiracists are Bastards “.
The thing I keep addressing is , someone can teach the same thing and unconsciously apply their political ideology in it. It doesn’t matter if someone is apolitical because politics are going to reflect someone’s personality type ( MBTI ) .
For me , I became an Anarchist in 2017. Before I was just left wing. Sometimes I agreed with liberals , democrats , ( right wing ) libertarians , etc.

A thought I had on my mind since around the time I made the video INFP Earth Angel was is certain personality types more closer to the spiritual world like INFPs and some related personality types where others were molded due to the effect of authoritarian and or centrist parenting ? What’s interesting is my father was so authoritarian , reactionary , however he didn’t seem to be very involved in fundamentalist religion ( Christian Right for example ) . But has quietly admitted that he was republican but didn’t bother talking a whole lot about it to me.
He was a very prejudice bastard. He thought Gay men rape other men when you weren’t looking so keep a good eye on them. Which of course is a bunch of homophobic nonsense. I can see two men kissing and holding hands and all I see is two adults in love , that’s all.
Just because I’m a Trans-woman doesn’t mean anything other than that. Besides , I’m a lesbian.

So welcome to my perception on life. IF no one is hurting themselves or others , no problem.
Love is the answer. Love is so simple. Anarchism relates to all of this. 5D Earth will bring about all of this just as long as we have love in our hearts and higher vibrations which such Law of Attraction will act like a collective for the rest of the planet which all forms of evil and negativity inward and outward would disappear. Arts and history I hope stay interacted so we can learn and appreciate what existed before. Love is stronger than hate and fear. Even though Evil thinks it’s stronger , if that’s so true than how come narcissists can’t feel love , they just hum a few bars and fake it. They fear of feeling vulnerable to love. They associate vulnerability with weakness. No wonder Right Wing calls Lefties “ Crybabies “ , they would rather play Kyle kicking Ike from South Park ( aka Kick The Baby - that’s from episode 1 “ Cartman gets an Anal Probe “ ) then realize that our age is only our body and it’s effects on 3D Earth.
We are taught such rubbish like cartoons and puppets is kids stuff , Adults are meant to be fearful and boring and angry wrecks because that’s normal , act your age , all this rubbish , forget about it. You need to cry then cry.
When we break down in vulnerable relaxness and cry when we see something so beautiful , especially when our throats tighten up , that’s the soul wanting to come out of your tight fisted mode within your body and mind .

Fear is filled with lies. Republicans and Right Wing people are not more relaxed than the left.
Accepting life as it is isn’t the answer. Meditating and getting your mind off of it for awhile is a better way to go about it when your so uptight !

Where we go with people arguing and fighting. As a satirist , cartoonist , puppeteer , humorist , I’m technically mocking such ignorance in this world because WE DO NOT NEED TO FIGHT AT ALL ! We need to wake up and see who’s been tying our shoelaces together and see their motivations.

Either we unite peacefully or we can kiss each other goodbye , in the very words of Noam Chomsky . The 1960s were on the right page for many reasons , same with the Spanish Civil War from 1936 - 1939 . The people united and they had enough.

However we fear what we do not understand. We need to question everything in which shows and proves that we live in this world of love vs fear , love heals / fear kills .

There could be spiritual people and anarchists fighting amongst one another of who is right and who is wrong. I say many can unite because such theories are related.
But perhaps it’s not the who because nothing changes except the names but the what which is hierarchy , and expression of hate , and expression of fear.
If you look at human fears as a whole , you can find out the motivations of the worst people of humanity because they are filled with the most fear.

Therefore the control freaks ! We live in this world where people don’t have time to care about anyone else but themselves. They are always seeking what good would this do me.
Surprisingly enough , everything and beyond !

We may be all different but on a soul level we are all the same.

Love can bring everything together where Fear can create the hellish dystopia aka The New World Order. So what if Heaven & Hell isn’t somewhere people go when they die ?
What if the afterlife is basically a soul collective of many dimensions .
What if where the building spot for Heaven or Hell is a fight over planet Earth ?

It all depends on what power gets stronger and it’s not outside of us , it starts with the power of the inside out instead of the outside in.

We all find peace inwardly within ourselves and the more people do this , then such peace will manifest in such a collective of like minded higher souls , then fear has no choice but to give up. Such Ego is very outward and filled with illusions of wanting to gain power over everyone , everywhere and everything using fear as a tool because they themselves feel powerless.

Awareness is not fear mongering , it’s an expression of love.

Posted by Erica Crooks at 1:35 PM No comments: