Satirists Against Trump and Fascism

SATIRISTS AGAINST TRUMP and FASCISM 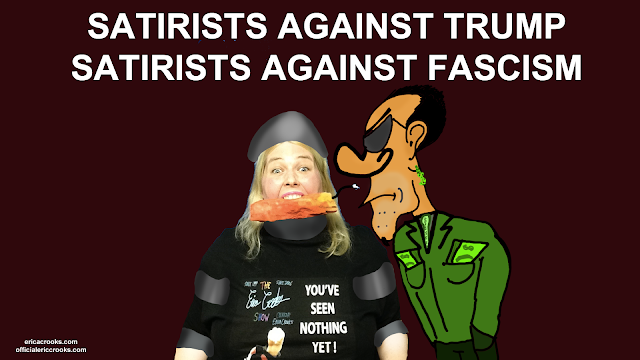 At the time I have written this , two things have happened . A racist Trump supporter has committed mass murder praising Trump’s name and Trump NOW and LITERALLY beyond my satirical work WANTS TO OUTLAW SATIRE ! Two red flags alone proving that not only is he a narcissist , sociopath , psychopath , dark triad , sadistic , fascist bully but also EVIL ! The very REASON why satirists hate him , the very reason why women who were abused by him HATE him , the very reason if his family woke up to realize they were dominated by his authoritarian abuse just like his father and just like Westboro Baptist Church they would run away and get restraining orders against him.
I never thought I see the say when this news broke out.
https://ew.com/tv/2019/03/17/trump-threatens-snl-twitter/

First of all I think like everything in media sucks today. Republicans going after liberals and Saturday Night Live ( Muppets , Robert Smigel’s Saturday TV Funhouse , Celebrity Jeopardy , Jaws going door to door and eats people and a few others ) ( which the new stuff isn’t very funny ) that’s minor compared to say Mad Magazine , South Park , Spitting Image , Ian Hislop ,  Les Guignols , and Anarchist satirists can do to him.

When Comparing Trump to Hitler and McCarthyism was once satire , it’s now FACT ! Trump is a fascist.

If Trump outlaws satire , then we would be entering the very fate of what the past satirists have gotten.
MURDERED BY AUTHORITY .

So is that what Trump wants ? Us to go to the American version of the tower to be beheaded ?

Perhaps Trump needs education on the subject of SATIRE !
http://www.nallon.com/?p=130

Or how about a lesson from Dan O’Neill

Or perhaps we should get THE ULTIMATE SATIRE to KICK TRUMP’S ASS !
https://www.edp24.co.uk/news/spitting-image-revivied-america-roger-law-wells-norfolk-donald-trump-1-5783893
“ I can out-gross Trump. “ _ Roger Law ( Spitting Image )

Trump continues being a fascist , he makes anything “ LEGAL “
It’s time for a social revolution !
NO MORE HIERARCHY , ENOUGH IS ENOUGH !

“ Spit on your own and you can't do anything, but if you all spit together you can drown the bastards - Bob Crow “

When the people are united , we can not be defeated.

Ok folks , so I seem all spiritual and passive in my videos. Well that’s my soul . And so is the liberation.

TRUMP is clearly against people like me ! Leftists and Minorities ! ALL RIGHT WING ARE FASCISTS !

Posted by Erica Crooks at 12:22 AM No comments: