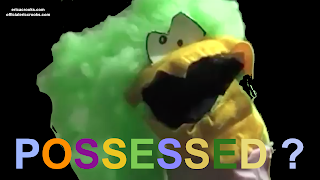 Happy Valentine’s Everyone ( at the time I originally uploaded this ) ,
This took me 2 nights and a few accidents laughing at all of this which is a perfect excuse to do the laundry.
How nice of me ! It’s Valentine’s Day and people would rather want to spend time with the ones they love or be left the hell alone either because their single or in Twin Flame Ascension like me , so here I am just like the Wicked Witch giving a poison apple to Snow White.
Nah , I don’t have the heart to be a narcissist.
Anyway before we begin , a little disclaimer sort of thing.

( The clips are actually just saved marks of episodes so please don’t torture yourself by watching the whole thing … unless of course your heart and soul is strong enough and you got a lot of time on your hands but please , hear my words or suffer the curse which is Wimzie’s House . )

As I’m hitting 31 next month , I need to come to the realization that I am no longer the youngest adult generation anymore. And if you say that you had a childhood in the 1990s , you are going to look very very old.

But even if you did grow up in the 1990s , it really depends on if you even heard of Wimzie’s House which broadcasted on PBS in the late 1990s.

Wimzie’s House comes off as something no different from any other show for little kids.
Only kidding.
It’s kind of like how The Ren & Stimpy Show kind of comes off as this Saturday Morning Cartoon Show in the likes of Looney Tunes meets Hanna-Barbera but takes a Nightmare Fuel pill and a spice of satire and dark comedy for good measure.
But of course the difference was the original Ren & Stimpy was very good . :) ( Unfortunately I can’t say the same about John Kricfalusi )
Wimzie’s House however comes off as this kindergarten show….
Except having two-faced parents who are either super happy to being quite AUTHORITARIAN giving the kids time outs all the time.
And a dose of nightmare fuel.

What nightmare fuel ? Yes , Nightmare fuel.
That’s why this review is called  IS Wimzie’s House Possessed ?

Don’t believe me ?
About the
Nightmare fuel ?

Move over Caillou , Someone WORST THAN ELMO wants to come over and make your life a living Hell.

Years ago and even to this day I can basically call Wimzie’s House
A dumb down patronizing kid show who’s values are liberal love parenting and authoritarian punishment covered in sugar coated happiness and sunshine for 3 year olds on the same levels as Barney the Dinosaur and The Wiggles .

However I’ve discovered a DARK SIDE which begs the question “ Is Wimzie’s House Possessed ? “
Now when it comes to a puppet show that’s actually funny and meant for adults that dealt with a little one being possessed , I would humbly recommend “ The Terrible Twos “ episode of Dinosaurs which features a parody of “ The Exorcist “
https://www.youtube.com/watch?v=u7_PMFIE8Xg
Can you believe that Baby Sinclair was performed by Kevin Clash ? AKA ELMO ? YES !

But anyway back to the headache known as Wimzie’s House.

Years ago on officialericcrooks.com I had a Pop Culture Critic’s blog. And I considered Wimzie’s House to be the WORST kids show to feature Muppet like puppets. Even The Jim Henson Company sued Wimzie’s House in 1999 due to merchandise infringement ( which I thought was just as a bad and dumb move as making the movie Happytime Murders . )
I thought I over exaggerated . Perhaps a compliment is Jim Kroupa https://muppet.fandom.com/wiki/Jim_Kroupa  built the puppets ( Eureka’s Castle , Johnny & The Sprites , Groundling Marsh) …. Those are way better.

I wanted to call the show “ Time Out Time “ since it really does seem like the characters get punished all the time. But the more I watched episodes online , I get this uncomfortable cheesy liberal feel to it.

I even spotted A DARK SIDE ! I don’t even need to write a creepy pasta , anyone could take all the episodes they find on the internet ( or iTunes ) and edit them all down and easily spot what’s wrong with it.

Almost like what someone did with Fraggle Rock. BUT FRAGGLE ROCK was BRILLIANT ! Also it was meant to bring about the message regarding Peace in the world.

https://www.youtube.com/watch?v=uBA2tokFOsk
( hilarious edit by the way )

Anyway back to Wimzie’s House ( Unfortunately ) .
I thought them almost killing a gold fish ( A Fishy Fish Story : Where they over feed the fish and think a fish is the same as a dog and they think fish need air and ran away. Oh and they name the fish Fiddo. ) was laughable as well as fucking up a bedroom https://youtu.be/EZzqJ70bwnc?t=25 and garage https://youtu.be/EZzqJ70bwnc?t=147 ….

Oh and remember kids , if your parents don’t buy you toys , THEY DON’T LOVE YOU ! BOO !
https://www.youtube.com/watch?v=Tv_bs7DK5Ik
What a great way to sell the merchandise !

Look at what I spotted on their CD ROM GAME : https://youtu.be/bmlfk2k2uTg?t=709

And to top it all off , the Grandma “Yaya “ is a Medium !
And they are Dragons !

Ah screw this kids show , let’s see a screwed up couple fighting themselves over something nothing and petty getting ready for a divorce.
The house , the kid , the dog , the careers , this home kindergarten business just ain’t paying the bills !
https://youtu.be/m4N-R0_EdIg

Did I mention one character is obsessed with dirt ?

In the episode Bye Bye Birdie
They feel sad that a bird dyed and they hate a cat for eating it ,
The lesson ? That’s life !

There’s even a lot of self hate !
From your parents don’t love you to
IT’S MY FAULT !
https://youtu.be/HyQDK5a1xIU
( time to commit suicide and self harm eh ? JESUS CHRIST ! )

Is this a secret message that authoritarian parenting gives the kids PTSD ?

Oh so wholesome and liberal…
until…
https://youtu.be/WxhRMXPhPpQ?t=863

You know I thought this show SUCKED ! Even as a kid seeing this crap on PBS in the late 1990s. Unfortunately if something had Muppet type puppets on it , I wasn’t going to change the channel and therefore suffer anyway.

So there’s questions to ask. IS this show really that educational promoting liberal parenting
Or is it also just a bunch of people who hated working on the show so they were going to make it worse from characters getting time outs all to time to
SCARING THE SHIT OUT OF THEM !
To the point of psychotic fits
https://youtu.be/3E-xrYzDIAs?t=1202

Something as minor as Ring a Round the Rosie can make your heart sink.
Where the three main characters with their floppy arms on rods seem to act like demented spirits as Wimzie is in the position of a submissive helpless baby.
The dark spirits start to haunt her through the song
https://youtu.be/IGeMLVavh5Q?t=1176

https://en.wikipedia.org/wiki/Ring_a_Ring_o%27_Roses
Just look at the origins of the song . THE BLACK PLAGUE !

The show really does seem like a cash cow on educational children’s television and a competitor to Sesame Street.
However I do feel that …. Ok it’s a kids show …. I still find it very patronizing , filled with weird mixtures of liberal / authoritarian parenting “ TIME OUT RIGHT NOW “
And well…

I did save the best clip for last .
That proves once and for all that Wimzie is a PSYCHOTIC DEMON !

But maybe she’s just a victim of having really bad Authoritarian parents to the point of getting Post Traumatic Stress Disorder
Which can give you extremely scary nightmares.
( I know about this from personal experience )

HOWEVER , narcissists are known for lying and playing the victim.

And if you don’t believe me that Wimzie’s House has Nightmare Fuel ….

So who knows….
The fish named after a dog sure is possessed however.
https://youtu.be/MDfj9xi_mic?t=791

I better end this thing soon , I keep finding more and more strange creepy things.
Ever feel so angry that you start making horse noises when you shake your head. Me Neither.
https://youtu.be/Zof8H5ZH_wE?t=894

UGH ! This is getting strange. They eat like cannibals and then act like normal….uh…never mind.
Ok so we can accept that with Cookie Monster but…
This gives me the newbie jeebies , just this 2 second moment.
https://www.youtube.com/watch?v=2hE6qszU5uo

Seriously does this sound like someone making a Moo noise like a cow ,
Or someone MOANING IN PAIN IN A dungeon ?
https://youtu.be/YsdChGYMmvE?t=281

And if I can be honest with you all about something. I FUCKING HATE LULU ! She has such an annoying laugh “ AAahhhh “ ! I can’t stand it !

So is the nightmare fuel intentional ?

So yeah there’s so much to do with this conspiracy theories.
Is there a link to the Afread Hichcock films The Birds ?
https://youtu.be/6EnkH1_Zq8c?t=310

Wimzie is psychotic , she gets nightmares all the time thanks to her authoritarian parents ,
And she is possessed.
Have you ever seen Dara the Explorer have a psychotic fit ?
Seriously this is possessed Wimzie !
https://youtu.be/PjvF2mgAgJ8?t=330
Casting Black Magick spells where sheeple just think like the centrists they are.

But at the end of the day , it’s just a kid’s puppet show.

So yes , that was NOT the last clip I was going to share.

You be the judge of it all !