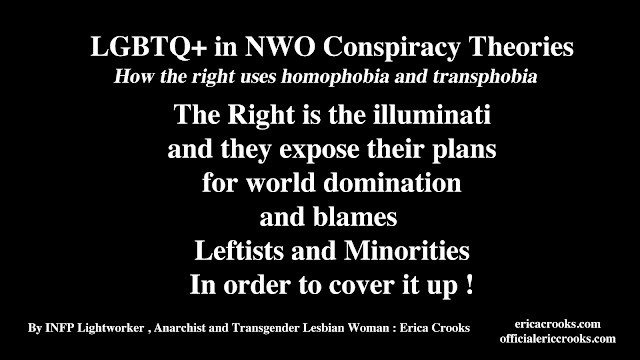 Let me tell you. Some days it’s just fun making a cartoon that knocks the piss out of the right wing and you and your fellow lefties laugh at it and hopefully gives you a happy feeling where we are stuck in this crappy hierarchical society controlled by sociopathic control freaks.

What’s interesting and at the same exact time what is quite dangerous is how there’s right wing people in the spiritual community that believe in 5D Earth , New World Order Conspiracy theories and hey it sounds kind of good right ? Maybe they will side with love and light after all.
Hold the phone !
Now what have I been talking about in my previous blog posts ?

I was talking about how Authoritarian is Evil , Fear is evil .

And the thing Right Wing people like to do is “Shift The Blame To The Left ! “
They blame the minorities and lefties ALL THE TIME !

In this case , this is why I don’t praise people like David Icke !

And you know what ? It really sucks that I have to be cautious every time I want to learn about The New World Order and UFOs and trying to find a source where idiots aren’t being homophobic and transphobic !

Their homophobia and transphobia they justify as talking about something known as “ Agenda 21 “ which according to my quick research is just like I have expressed in my previous blog posts. “ The New World Order is just Right Wingers exposing their plans for world domination dystopia AND THEY BLAME THE LEFT AND MINORITIES WHICH HAVE ABSOLUTELY NOTHING TO DO WITH NWO AT ALL ! “

Allow me to point out the garbage these idiots believe about how LGBTQ+ is linked to the NWO which of course is not true at all.
Not only do they associate LGBTQ+ people with sex criminals ( yeah so typical of Right Wingers isn’t it , Fear driven bullies ) but
They justify their homophobia and transphobia claiming that it’s apart of the underlying depopulation agenda of the globalist elites.
They think the LGBTQ+ Queer liberation is created for evil and that is not true at all !
I don’t feel like a malevolent reptilian , because I’m a lightworker.

So that’s the stupid homophobia and transphobia. And they try to hide behind this prejudice by saying “ Love whoever you want but … “

If there’s going to be more LGBTQ+ BORN THIS WAY I REPETE BORN THIS WAY , then GOOD !
But here’s the reality , we are minorities and who cares if there’s more cisgender heterosexual straights and less LGBTQ+ , we are all different but we are all the same.

This whole idea of there’s becoming less people or there’s too much people
Is one of many Right Wing fear driven beliefs.

The more there’s people who side with Right Wing politics
And think they can support 5D Earth and New World Order Conspiracy theories ,
They need to wake the F**K up and realize the big picture instead of individual trees.

Cisgender Heterosexuals multiply . But there’s plenty of them that enjoy making love just as much as LGBTQ+ people . We are different but we are all the same.

This is one of my reasons why I’m a libertarian socialist Anarchist / Anarcho-Communist.

And I’ve already talked about how there’s Anarchists that think all of this New World Order Conspiracy Theory stuff is a bunch of bunk and they also throw away Law of Attraction coming to the conclusion that Spirituality is hierarchical ,
I STRONGLY Disagree !

As ContraPoints has pointed out ,
Fascists are going to change their symbols and names and deny everything.

Now let’s look at this theory in another way.

They want to use religion and media to suppress sexuality to say it’s dirty and disgusting and sinful.
Well guess what…

That’s the #1 Top Secret ingredient to their dystopia.
And it’s already working.
It’s HOW RIGHT WING PEOPLE MULTIPLY !
That’s why we got young men like Ben Shapiro existing !
That’s why you got young people fighting war and or wearing MAGA hats !

Now I’m not going to be some Alex Jones and have people be scared all the time.

The truth is YES , love is the answer.
But LOVE and being a homophobic / transphobic BASTARD DOES NOT WORK !

We fear what we do not understand , once we understand something then we no longer fear it.

Finally for those who don’t already know.
My name is Erica Crooks and I am a Transgender Lesbian Woman.
Yes I am non-op but that’s my choice. I’m still a woman.
And spiritual people should know that women spirits can be put in different bodies at birth and same with men ( Trans Men ) and non-binary.
I’m also non-binary as well.
So I’m an Androgynous Femme.

My Twin Flame also identifies as Genderqueer as well as a Masculine Butch Stud Lesbian. And she’s cisgender.
She is also an LGBTQ+ Activist.

YES , LGBTQ+ Twin Flames do exist so watch your step.
Or we’ll use love to help heal the planet into 5D Earth !

So are Right Wing people really for 5D Earth ?
Well here’s the thing. You have people who are brainwashed and blindly obeying authoritarian crap and then you have Authoritarian sociopaths who are totally conscious of what they are doing hypnotizing and brainwashing these idiots using FEAR as a tool.

Anarchism never uses fear as a tool. Anarchists are against hierarchy because hierarchy can not be justified.

Most of my followers , viewers , fans , listeners , etc already know this.

But there’s a bunch of people who don’t , well now you know.