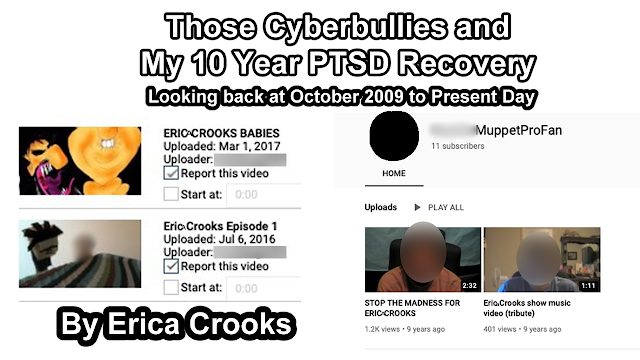 At the time I write this , next month would be exactly the 10th anniversary of when I ran away from my abusive father and since the traumatic events that happened to me as mentioned in my first book “ Adults Get Bullied Too ! “ https://officialericcrooks.blogspot.com/2019/08/adults-get-bullied-too-erica-crooks.html

Ironically I came face to face with the thumbnails of some of the very videos that triggered my Post Traumatic Stress Disorder . Fortunately after 10 years of PTSD recovery , I was able to see these pictures without the fear that my life was in danger or suicidal tendencies as I had previously.

I didn’t even bother watching the videos and why should I ? I have so much self love , self esteem and self confidence in myself that seeing and hearing what some bullies have to say and think about me is a complete and utter waste of my time and attention.

But I’m not going to pretend what they did was no big deal and just laugh it off because there is in truth no joke. If there is one , it’s a satirical aim towards them because those who hurt others hurt themselves ( Ok I took that from The Tale of The Bunny Picnic lol :P ) .
I may have gained weight since 10 years ago due to my isolation , alienation , recovering in my PTSD and deep depression but perhaps I can be looked at like a Budda figure since spirituality , a satirical sense of humor , my loves in life , anarchism , and achieving goals such as gaining what I have lost and finding the love of my life ( My Twin Flame ) …. I HAVE ONE ! Not the Bully ! I’m still alive at the time I write this. They are the losers , not me. I did absolutely NOTHING wrong and I am not alone.

I had thoughts of revealing the very names of the very men who started this sick dark triad cyberbullying since 2008 and to this very day , the very men who paid me $80 to freelance them on 2 animated projects … Why should I bother saying their names or the projects which were NOT to help them with their Hollywood entertainment industry career as they once claimed …. Besides , it’s already on my portfolio names and all https://ericacrooks.weebly.com/filmography.html .

I remember the videos which I had filmed where they had this obsession with making me look like a muslim with islamophobia and all. I am anti-religious however as an Anarchist I am all for religious anarchism because it’s spirituality since there’s no hierarchy in it so therefore it’s no longer a religion or a cult. :) Also liberal religious people would seem to not be filled with hate like the religious right in general.

One video was where I was proving a point when it came to the free speech of adult puppetry , animation and satire which was my right to do so. It was unfortunately patriotic because I was talking about my “ American “ civil rights with nationalistic patriotic music and the flag at the end. Yeah… it was 10 years ago , also I didn’t come out as a Trans Woman yet but I still was Androgyne / Genderqueer however the way I looked didn’t seem it , being dressed like a preppy due to my abusive authoritarian parents.

So looking back , I’ve already talked about the events that had happened in Adults Get Bullied Too !  https://officialericcrooks.blogspot.com/2019/08/adults-get-bullied-too-erica-crooks.html
But there’s a reason why I’m not going to bother pointing out these two. Perhaps they were the ones doing those really crappy imitations of The Erica Crooks Show ( my satirical puppet show ) but I’m sure there was others involved which they have networked with 4chan and other dark triad bullies who suffer with toxic antisocial personality disorders and are politically right wing ( aren’t they all , all right wingers are fascists ) .

They are not the only ones. Some are more a threat than others. But as an Anarchist , I know that I’m not the only one who’s recognizing this abuse. I am so grateful for how Transgender people are being recognized more and the awareness of cyberbullying on the internet.
Also the fact that ANTIFA would kick the butts of bullies ANYWHERE , ANY PLACE and ANY TIME ! I am a pacifist but of course there’s comfort in that. Perhaps doing posts like this is my form of direct action I suppose. That and political satire aka Con & Spy Rotten ( Yeah Yeah Exactly Man ) .

For those who have had similar events happen in your life just remember you are not alone , you are loved , self love is key , follow your dreams regardless , do research of what you fear so you can understand it and they fear will go away a little bit and NEVER EVER ALLOW SOMEONE TO CONTROL YOUR LIFE EVER ! Because fear is a tool of control and therefore hierarchical which is something Anarchists are AGAINST !

P.S. For more information on Cyberbullies I would like to recommend the following sites
https://www.ipredator.co and https://www.darkpsychology.co/