When LOVE is all you GOT 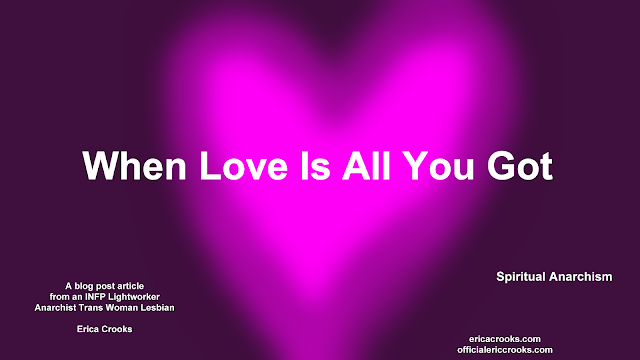 When LOVE is all you Got

I’ve been making a lot of blog videos since 2015 and more so in 2018 after a year of getting into Anarchism ,
https://www.youtube.com/user/officialericcrooks/playlists?view=50&sort=dd&shelf_id=5

I even started a presentation style video similar to those old Powerpoint presentations for those who remember what the heck I’m talking about.
https://www.youtube.com/watch?v=E5fx1Lr_Zrw&list=PLJLbzpbdP5rk5XBni13DEXQtbn5OZAsGW

As well as Season 12 of The Erica Crooks Show at the time I’ve written this blog article thing.
https://www.youtube.com/watch?v=nF8wQelL7v8&list=PLJLbzpbdP5rnUKThHcB-xN62u98B4CLP_

As well as comics
https://instagram.com/officialericcrooks/

Also by blogs on
https://facebook.com/officialericcrooks/notes

I feel this whole entire time regardless of how many people hate me for what I am , what I say and what I do , I am being spiritually guided while doing so.

Many times it seems like I would be murdered for it all but perhaps it’s stuff that people need to wake up to.

It’s interesting because if your a right wing bigot hurting innocent people and you blindly obey your lords and masters it really does seem like you would have less chances getting hurt than being left wing and or a minority of the oppressed working class ruled by the sociopaths aka The Ruling Class ( The Illuminati of The New World Order unless that’s an invention from the Right Wing Capitalists themselves to expose everything about themselves and blame lefties and minorities as scapegoats. )

And yes it’s quite intense . I know I’m a Heyoka Empath . It explains why I just can’t hate and escape satire , it’s the liberation of the human social.

I know I’m a lightworker because I simply can’t think that life is ok and not superficial .

Law of Attraction and New Thought / New Age Spirituality is what keeps my sanity .
Sure it’s fun being a satirist but yes I too get depressed and PTSD nightmares and stuff , so regardless of how the world is right now , sometimes we just need to take a break and love what exists in life.

This kind of self power has been talked about not only in The Secret but also The Anarchist FAQ .

And I have said over and over in my blog videos and articles that it’s not just an either or but perhaps maybe Spiritual Anarchism . :)

Here’s the thing about the world , Hierarchy is caused by Psychopaths at the top and all of us on the bottom including psychopaths who aren’t as successful being on the top.

Hierarchy is the root of all Evil I think. The reason why Black Magick and Dark Entities exist is because they are ex-humans that act like a non-reincarnated collective just like angels , spirit guides , aliens , etc.

I was trying to do research if there is indeed a cure of Narcissism , Sociopaths , Psychopaths and Dark Triad .

Some have claimed to find a cure but the more I look into it the more it seems to be a fraud. If there was a cure , we won’t have Trump as president.

What if everyone was meant to be NF ?

So what the heck are we going to do ?

Well I do talk about it a little bit in my video talking about why Hierarchy is wrong and evil .
https://www.youtube.com/watch?v=fV6Y3FfV-oc

And I know we are all working on this together.
I can only tell you my perception on revolution which is I much prefer taking revolution in the most peaceful direct action and spiritual action as much as possible.

Even Noam Chomsky says that’s the only possible way to go about it because THESE TOXIC PEOPLE ARE CRAZY !
https://www.youtube.com/watch?v=VkH-cyuFPtc

If we had Anarchist Therapists and Anarchist Mental Health doctors somehow even by force these toxic people into therapy just to cure them , that’s the only way I can see a possible revolution happening in peaceful means next to perhaps a 5D Earth as people’s peaceful manifestations through The Law of Attraction acts as a powerful spiritual collective since love is the highest frequency and hate and fear is a lower frequency.

Either way love is the answer.

I don’t believe violence solves anything.

I do understand why Antifa does what it does . I don’t know how effective they are in what they do but it’s good to know you got people fighting off people who murder and hurt innocent people.
https://www.facebook.com/notes/erica-crooks/does-antifa-show-us-the-future-/1915482865219089/

I’m not one to be a member of Antifa but as an Anarchist like Black Blocs even though I do not think their forceful actions are effective , it’s their direct action and like the peace / anti-war movement in the 1960s , everyone is doing whatever they can to make the world a better place. Especially liberals even though trusting the hierarchical systems for social revolutionary change is like trusting the narcissist to never hurt you ever again.

There’s a reason why Revolution has Love spelled backwards in it.
That’s what we got to do.
But it’s not the liberal approach in my opinion where we just love and leave everything alone as single issue problems that are resolved by leaving everything alone with love.
I do feel that social justice is needed and we need to play the adult parent harder than Authority ( aka Hierarchy ) does to us.

Because the reason why evil exists is simply do to the endless tradition of authoritarian parenting.

The answers are out there , people need to be aware and once they are awaken they need to spread the world right away.

However it can get overwhelming I know.

It’s why I made a video talking about burning out.
https://www.youtube.com/watch?v=EVpVPFLgekg
While I was burning out. lol

I see many great people feel this way.
Also people who are introverts and are very lonely because they just want to be with like minded people.

I do think online communities is a good idea but we need to make sure that we can filter out those hateful cyberbullies and trolls to make sure we have our “ Safe Space “ .

Peace and Love starts from Within like everything ,
A doctor can’t help a patient if the doctor is sick.
We need to be our own doctor sometimes before we can help other people.

Self Love is key. Spiritual people know this as well as Anarchists ,
When you are filled with love yourself and your life is filled with gratitude ,
Then you can be a better lightworker then you have been
Trying to gain joy from the reactions of others on and offline.

Posted by Erica Crooks at 7:49 AM No comments: