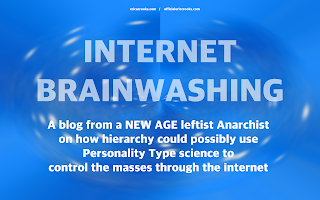 Free Internet is Yet To Be :
What if Internet Capitalism and Hierarchical Power
Already destroyed Net Neutrality

It’s interesting and quite ironic that I became an Anarchist by summer 2017 .
Sure I might watch Rachel Maddow for Rachel Maddow and perhaps
Wonder if Rachel Maddow will get a make over looking like she once did.
https://f4.bcbits.com/img/a3372682723_10.jpg
Young Rachel Maddow in this picture kind of reminds me of my Twin Flame. :)
I’m so lucky. :)

Anyway , even though there’s so much excitement about Trump’s impeachment and Democrats getting into power in the United States , does it really solve anything ? Of course not. Why ? I’m left wing aren’t I ?
Well some would call me the “Far Left” but I consider Libertarian Socialist Anarchism / Anarcho-Communism to be as true to the human soul as New Thought / New Age Spirituality.

Tonight I had a thought on my head. Perhaps something I talked about before which is obvious to Anarchists as well as iNtuitive Personality Types ( for the most part ) as well as Leftist New Ager’s who believe in The New World Order / Illuminati from a left wing prospective.

Here’s the obvious : The media is controlled by hierarchical power.
Democracy , Living in a Free Country , Voters Rights , etc
It’s nothing more but smoke and mirrors , that’s right our Civil Rights are nothing more but an illusion.

What if the most fear filled , insecure , and evil acting psychopaths , sociopaths , narcissists , dark triad , etc ruled us in a hierarchical situation and made things so complex that it would take a leftist perception , spiritual gifts and abilities , intuitive personality types , conspiracy theories , theories , etc to put all the puzzle pieces together to reveal what’s really going on ?
The truth of the matter is , IT’S HAPPENING RIGHT NOW ! FOR A LONG TIME !
https://www.truthcontrol.com/articles/most-people-cant-put-pieces-together-because-their-personality

Could there possibly be a link relating to personality type and it’s relation to hierarchy ?
http://anarchism.pageabode.com/afaq/secB1.html#secb15

I’ve mentioned in my previous blog video that perhaps the attitudes towards hierarchy is related to the basic human fears therefore love is the answer.
https://www.youtube.com/watch?v=PZKXFXZuyhE

LOVE is simple. Fear is complex.
Fear is about control as love is about letting things go with trust and expectancy ( aka Law of Attraction ) .

And it’s very interesting just how much fear influences each and every one of us.
Perhaps , the rulers of this world are automatically or they are conscious of the factory machine of brainwashing which they create crime while tell everyone that Law & Order is justified.

Regarding the internet, researching any sort of SEO tactics and tools for about 5 years now.
Can anyone guarantee something to go viral and popular ?
Or is it staged ?

And does viral / popularity really matter ?
Most of the time it doesn’t.
But when we live in a hierarchical system where there’s more people unaware of what’s really happening then those who are aware and awakened , well yeah you do want to become the reformer at that point.

Here’s a question to ask the so called SEO organization of The Internet , So called enjoying Net Neutrality.  What if the newspapers , television and even the internet is catered toward sensors ?
Perhaps what goes viral is attractive toward ESFP personality types while politics , business , alt-right doucebags appeal to ST personality types ? While social media can also appeal to … say your ESFJ mother who wants to share family photos with their sister on Facebook which is something my mother would certainly do if she wasn’t so terrified .

We can not go play the blame game of which personality type is evil or not. It won’t make much sense to do that even though we do it all the time with politics and individual personalities.
A personality type reflects how people see the world and react in the world currently.
Maybe there’s certain personality types that are born pure and closest to the ideal of spirit while others are more conditioned to the hierarchical system which they aren’t as strong to nonconform and debunk hierarchy.

If you want to help out your fellow others , perhaps it’s easier to speak to your like minded type then it can of others.

Perhaps we all need to educate ourselves of how others learn as well as to know when certain projects is best appropriate to include our certain talents.

For example I like the idea to make learning fun , exciting and entertaining while others take on a more serious approach.
Non-Compete tends to do both just that.
https://www.youtube.com/channel/UCkZFKKK-0YB0FvwoS8P7nHg

Just know that when it comes to any sort of battle of duality , I say that even though Good vs Evil , Positive vs Negative can pretty much be subjected depending on the individual ,
Where there is no right or wrong ,

Perhaps the ruling class of capitalists are NTJ types along with STJ types.
Perhaps the media and it’s celebrities are SF types , where perhaps ESFP types gain the most popularity .
While iNtuitives make a bunch of online content which may only attract iNtuitives unless they do something that caters toward sensors.

Sure James Rolfe might slip in some intellectual philosophy here and there , but one thing is for sure , pop culture is popular and FUN ! Also it’s relating to my line of work.
I have an ISFP friend to got me into AVGN .
And there’s a difference between how we see things a little bit.

We can love the same sort of films and TV shows.
But I think the ISFP sees entertainment as simply that , FUN / Entertainment .
Where I would probably analyze the hell out of something to find deeper meaning and hidden message in things.

And here’s my friend’s

How interesting something like this would be entertaining to an ISFP and INFP
https://www.youtube.com/user/JamesNintendoNerd

As for my friend’s perspective ,

He got the DVDs which I still need to get ( at the time I write this ) .
https://www.youtube.com/watch?v=PyFWx2Tzn9Q

So I hope you can all see how personality type science is very important.

Another thing , I’ve noticed that my most popular videos currently are my MBTI and Transgender related blog videos , not my puppet cartoon satire comedy.

But then again , like anything perhaps it’s yet to be discovered.
Which is the very point I want to make in this very blog post

I’ve already discussed this in previous posts relating to internet capitalism but it’s quite obvious that content made from the working class / poor could get buried and clouded
By those who have money aka Ruling Class !

Notice how impossible Google Adsense can be ?
What if someone decided to screw it one of those highlighted links on the top ?
Well it won’t bother the capitalists none , they got plenty of freedom tickets.

I bet the richest of the rich know how useless money is and it’s nothing more but a tool of control. So much for business school !

Bob Proctor can be very influential with his wisdom and philosophy relating to self confidence ,
But if those in power gain it through hierarchy such as capitalism , perhaps it just proves that anarcho-communism is way more wealthy and secure.

Let me throw another example out there.
Entertainment.

Say you seen the film “ The Happtime Murders “ and you know it SUCKS !
Then you enjoy puppets that are funnier.

Allow me to recommend a list of my favorites
https://www.facebook.com/notes/erica-crooks/funniest-puppet-shows-in-tv-film/1773402342760476/

Same could be said about cartoon animation , music , etc

But let me also stomp on the breaks ! Why are we competing ?
My does Coca Cola compete with Pepsi even though there’s people who like to drink both or neither ?

WE DO NOT NEED TO COMPETE !

But when you are on the internet , it raises a question.
SEO !

Is it organized by the popularity of the people
OR perhaps

The popularity of the people can also be the product of hierarchy more than individual choice on a brainwashing unconscious level.

It’s like someone who got into Bahaman and then they get older and realize just how corny “ Who Let The Dogs Out “ is. * Yeah this is showing my age isn’t it. *

So here’s the point I’m trying to make.

This hierarchical system influences people in ways most won’t suspect probably because we are raised in such types we can mistaken it as utopian as it’s going to get or that it’s pure civilization.

Ajit Pai can bitch and moan and whine and throw himself in a temper tantrum just like all right wing politicians do then throw the “Butthurt Crybaby” label at the left wing ,
BUT …

How long is it going to take for people to wake up and realize that enough is enough.

You can look at the obituaries and see all the people who have died and never started to live life like they should.

Not only we can only image , we should.

Picture hierarchy in the symbol of a school yard bully who lived their life always getting away with being destructive. And perhaps it reveals truth there.
The ruling class comes from generations of school yard bullies.

Think these fascist bullies are happy hurting others ? Or is their EGO so num to any pure soul , that anti-social behavior is their only means of explosion as if their body , mind , soul was thrown in a blender of hierarchical toxic negative energy.

So what are we going to do about it ?

Was it due to the capitalist class becoming stronger or is this nothing more but INFP utopia dreams of a heaven on earth ?