The Earliest Origins of The Erica Crooks Show 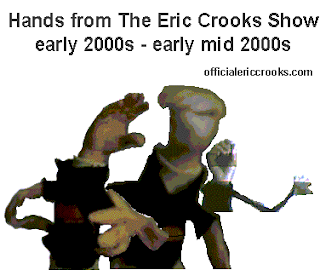 I was 11 years old when I written a post on a puppetry newsgroup with my WebTV at the time , and this really goes to show that you never know who your talking to on the internet sometimes. It’s kind of laughable and embarrassing at the same time. A College Student who doesn’t realize they are talking to an 11 year old kid and not a troll. lol

In 1999, which was the year that I found out about public access television existed and when I made some home movies of my first puppets which were just my hands with shoelaces around them and a sock, This was the early origins of The Eric Crooks Show. I was only 11 years old and perhaps since the internet was just so new to me that I was quite impulsive. Here's a copy of perhaps my first " welcome world " post on the internet. [ certain names are not mention to protect the legal privacy of the not so innocent ] This was posted in an early puppetry newsgroup.

The Eric Crooks Show Look at this !

( Reply from some ..... college student on the internet )

Alien is a alien puppet . OK ?

If you don't Beavene me wait and see .

>  The show is going to be taped at Comcast studio .
As in Comcast Cablevision?  So it'll be a cable-access show, or...?

>  Alien is a alien puppet . OK ?
OK.  I was just being cheeky as I'm currently working on a xenomorph-type
Alien puppet (as discussed recently in this newsgroup).  For those that
followed that discussion, stay tuned and I'll post a URL of a webpage
summarizing how the project went when I'm done.

As a kid, I didn't funny know what I was doing except that I had this bright idea and totally enthusiastic about it and if I knew this guy was sort of mocking me, I would have been really emotionally hurt. But in this case I was a little confused.
But out of all people who said rotten things about me and my work, this guy was most likely the first where ever the hell he is now and who cares.

But what I find so funny about this is that this College student with some university email is arguing with an 11 year old. Technology has changed but human beings haven't. Though I'm a person who much prefers to live and let die in the past but since I felt this was not only such a very important piece of perhaps the earliest surviving anything of my earliest works but to show that there was idiots who thought me and my work was stupid before youtube.

Where ever this jackass is now, If he knew, he'd feel the fool of what that message would become 15 years later.