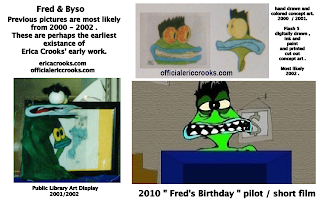 Fred & Byso was a childhood creation almost as old as The Erica Crooks Show itself but most certainly not the most lasting but almost .
I didn’t complete anything relating to it until 2010 which was the first film project I done since my tragedy in 2009. ( Read Adults Get Bullied Too )

In 2010 , I did a short animated test film and served it as a pilot episode.
https://www.youtube.com/watch?v=yrx8QWrWhAc
In December of 2012 Like The Erica Crooks Show , this too and everything else was rejected
from Comedy Central , [ adult swim ] , and Mondo Media .

In middle school , I was introduced to the software “ Macromedia Flash 5 “ which at the time was the animation software for independent animators for the internet.
John Kricfalusi / Spumco , Newgrounds , Icebox , Jib Jab , Joe Cartoon , Happy Tree Friends , Homestar Runner , etc
All used this software to bring animated cartoons to the internet.
I already knew what the software was , and my middle school happened to have the software strange enough , and I guess I self taught myself how to use it.
I didn’t figure out sound until later and I couldn’t figure out how to export animation properly instead of filming my computer screen with a video camera ( That explains the animation on The Erica Crooks Show from 2006 - 2007 ) until 2008.
And yes , I did finally get my own Flash 5 software !
Today the software is replaced with Adobe Flash as well as a bunch of other better animation software.

I can still remember ideas for episodes that I came up with as a kid.
I remember telling anyone I meet that this would be on TV someday.
And technically anyone can watch youtube videos on their TV so , yeah I guess I accomplished it a little bit. https://www.youtube.com/watch?v=yrx8QWrWhAc

One episode was going to be called “ Fred Goes Mad “
and basically it was Dr. Jeckle and Mr Hyde and clearly inspired by
a scene from The Ren & Stimpy Show episode “ Stimpy’s Fan Club “
where Ren almost murders Stimpy in his sleep.

Another one was when Fred dies and he was told by the angel at the gate of Heaven that if he decides to be nice to Byso instead of being an abusive jerk , his soul can finally be in peace and welcomed into Heaven.

Another one was Goodbye Byso where Byso gets carried away by the current of the ocean and Fred starts to miss his best friend until Byso finally washes onto shore at an elderly age and still alive and Fred beats up Byso.
Clearly ripping off “ Stimpy’s Big Day “

There was an idea where they go off into space , ripping off “Space Madness “.

Remember I was just a kid coming up with these ideas. And the thing about inspiration is when you have limited inspirations , it’s going to look like a rip off of something else.
Perhaps that’s why adults are slightly better than kids when it comes to this kind of things because they’ve lived life enough to come up with original ideas.
I don’t know. lol

At age 11 , I was up and ready to have my creativity onto mainstream television . At age 18 - 21 , I had my own public access television show . And now at age 30 , I’m a successful independent filmmaker and other stuff.
Today there’s kids with their own youtube channel and smart phones so ,
perhaps it makes the 11 in me slightly jealous because I didn’t have that in my late 1990s childhood. lol