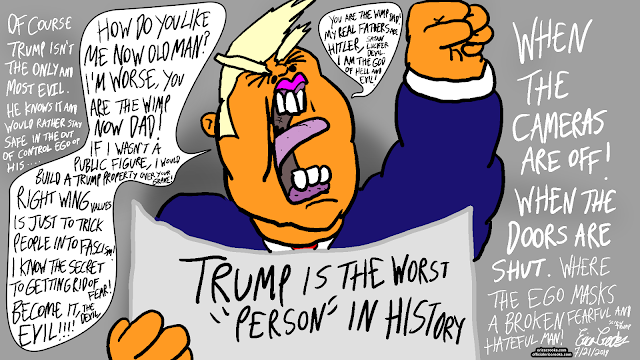 http://Instagram.com/officialericcrooks/
Posted by Erica Crooks at 11:14 AM No comments:

Am I Illegal ? : When a Philosophical Spiritual Anarchist Lightworker Questions Hierarchy & Authority

Am I Illegal ? : When a Philosophical
Spiritual Anarchist
Lightworker
Questions Hierarchy &
Authority 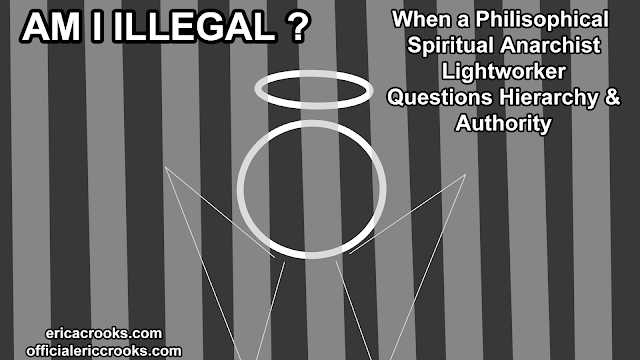 First of all , let me just say that I DO NOT think I am violating the law by any means and I do my best not to. However I feel it’s not only the right but also the duty of intellectuals to expose the nonsenses that is harmful to human kind.
In terms of Anarchism , I am a Philosophical / Cultural / Spiritual Anarchist. The state already thinks I’m mentally disabled and I bet they’d think the same on anyone who’s human with their neurology exams. Even people with spiritual ability are diagnosed with stuff. I went to see a neurologist last year February 2018 and this quack was a devoted christian right , an ESTJ / ISTJ personality type and usually I’m quite a calm friendly person but these kinds of people make me want to RAGE in Anger … seriously ! Perhaps it even triggers how similar they are to my abusive father who I cut contact with a little over 5 years ago which I never felt happier and freer before . ( See my YouTube blog video “ iNtuitive Discrimination for more https://www.youtube.com/watch?v=HEV24baR0H4  ) . When I tried to get a restraining order against a transphobe in my neighborhood in the summer of 2017 , I came face to face with an authoritarian judge who was also transphobic as well as another right wing ESTJ / ISTJ who thoughts “ facts mattered more than feelings “. The first time I was ever in a court room and hopefully the last. There was no jury , yet the rigidness of being told when to speak and stand remained. I was all alone , everyone stared at me as I kept pounding on the podium facing the judge with no fear , shouting in anger calling this all court “ JUST AS TRANSPHOBIC AND THE NEIGHBOR SO FORGET IT ! “ . I even asked semi-sarcastically “ Can I please excuse myself from the court or is that illegal within itself ? Are you going to send me to jail for life or what ? “ . Fortunately they allowed me to leave and did not take the case. That was the summer of 2017 . Trump was president , that’s when I gave up on the American Dream , America has finally betrayed me and I will never trust the government and authority the same way again .
When I did research on the philosophy and meaning of Anarchism , it fit my soul like a glove to a hand. It was meant to be.

The FBI website states “ Anarchism is a belief that society should have no government, laws, police, or any other authority. Having that belief is perfectly legal, and the majority of anarchists in the U.S. advocate change through non-violent, non-criminal means. A small minority, however, believes change can only be accomplished through violence and criminal acts…and that, of course, is against the law. “  . https://archives.fbi.gov/archives/news/stories/2010/november/anarchist_111610/anarchist_111610
Noam Chomsky is all for non-violence resistance https://www.youtube.com/watch?v=VkH-cyuFPtc
And So was John Lennon https://www.youtube.com/watch?v=sRq1mp4VArA
Can we also mention Emma Goldman , Jesus Christ , Martin Luther King Jr , Mahatma Gandhi , etc
What’s ironic is how Lennon , Luther King Jr , Christ and Gandhi were murdered while Emma Goldman was thrown out of the country .
Today Anarchists / Philosophical Intellectuals / and spiritual people thanks to the internet have better times now then they have ever had before. Is it because of the internet ?
But still a lot of work needs to be done.

I believe in doing things peacefully just like those I’ve mentioned not because “ it’s legal “ , but as a spiritual lightworker . Furthermore those in power I think would benefit psychiatry which is Law of Attraction and Anarchist friendly , helping the hierarchical accept the power of love instead of the love of power to heal their mind / body / soul and inner child.

Sure the writers of The Anarchist FAQ has a legal statement http://anarchism.pageabode.com/legal-disclaimer which mentions how they don’t take responsibility for what people do with the knowledge they represent . Same here.

And pop culture fans who make documentary / commentary videos on YouTube have disclaimers that “ What they think is fair use and if someone says they violate the law , they will gladly take it down “

Legally I could say I agree , but what’s interesting is that would mean that I would need to put legal disclaimers on EVERY SINGLE LITTLE THING THAT I PUT OUT THERE ONLINE ?

The point of being an Anarchist is we question the justification for Hierarchy. So far we only heard contradictory authoritarian dogma as an excuse for the justification of hierarchy which does not justify ANYTHING ! That’s our point.

Law and Order does not care about humanity ! Perhaps you want to call it a Pseudophilosophy ! The mindset of authority and the mindset of psychopaths are VERY identical !

So again I do not think I violate the law. But what is the law ? It most certainly seems like “ Just do what we say or we’ll punish you and take away the freedoms to live. “ Is that justifying hierarchy ? What about saying stuff like “ To protect the people … blah blah blah “ …. It raises more questions than brings about answers. Just like Facts matter more than feelings. So when you’ve been outsmarted , is that when you get violent and bring out the warfare ? Red Flag events , secret murders as I’ve mentioned ? etc ?

Here’s where I stand.

I’m a peaceful soul. I believe in the good of humanity and earthling kind.
Anarchism is not about chaos , it’s a political philosophy stating that “ Peace on Earth Is Possible “ if it’s supported by the masses.
5D Earth is New Thought / New Age Spirituality that says if the masses support and practice raising their vibrational energy to unconditional love and light instead of living in hate and fear like everyone else , perhaps a 5D Earth is possible aka “ HEAVEN on Earth “ , An Earth upgrade where even the laws of psychics and nature and other scientific hierarchies , animal food chains , etc will be dismantled.

What are my tactics you ask ?
Philosophy / Cultural / Spirituality.

If the culture of resistance becomes popular …. Then what ?

Love Heals ALL ! Love Conquers All !
Love heals , fear kills .
Love is a higher vibrational energy then hate and fear.

LOVE IS THE ANSWER !

And Love is spelled backwards in the word “ REVOLUTION “

Posted by Erica Crooks at 6:51 AM No comments: