The Truth About Entertainment 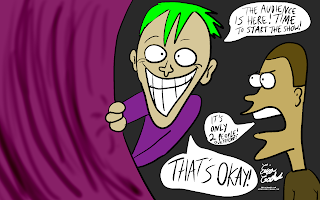 The Truth about Entertainment ?
by
Erica Crooks

Let me start off this post as a reminder.
What does an artist do ?
They share their art with the world.
Art is ideas , art is communication on so many levels , like minded people will follow.
Fans can be friends.

But sadly there’s people who simply want FUN !
And they think such fun is outside of themselves.
An expression of love , seeking love and trying to gain it , or an expression of the lack of love ( hierarchy )

Love just is. Love is soul , not ego.

Like minded people will follow. But don’t count your fanbase by the millions like
you would with your Facebook friends.
Do not let this determine your self worth EVER !
You hold your own truth inside of you , not outside of you.
You can be your own biggest fan and best friend.
Remember , you also create your own life , your own thoughts , how you feel.
You are in charge of you. If people took responsibility for themselves by seeing their truth on the inside , perhaps the world would crumble into something better.
Yes , a new world is indeed possible.

Do not let money and the outside world determine your soul !
Life is meant to be enjoyed and to learn , all in the expression of love. :)

And remember , do what you love and your like minded people will follow.
I’ve been saying this for over 10 years now so pay attention. :)

Ok , now onto business with creative talented artists who are totally struggling with their career.
Cartoonists , puppeteers , performers , musicians , anyone with creative talent ?
Do you feel like you just can’t make it in the entertainment industry ?
Or maybe you actually did work in the Hollywood Entertainment Industry
, and you used to be very popular but now you just can’t get a break .
The unions , the agents , the managers can’t seem to find you any gig / job
that isn’t CRAP ! And as depressing as it sounds ,
you are actually making more money at Comic Con / Comic Conventions / Pop Culture Conventions —— And there’s times that you just don’t right ?
You meet your fans face to face , they say nice things , BUT THEY DON’T BUY A DAMN THING !
Maybe a few actually do , and then sell it on eBay because just like you , they too need money to live on.

Let me tell you about my position as an artist . If people notice that I’m underground and obscure , that means I have no interest in the mainstream hollywood entertainment industry right ? It’s more then that . My work got rejected from Comedy Central , [ adult swim ] , Mondo Media and even Troma Entertainment has absolutely no interest in what I have to do.
And if you take a look at my following as I write this post. And you compare it to the well known ones. And how about trolls being the only ones to comment , to say anything about my work , and giving thumbs down , what does this say ?

Fame can come and go or not come at all !

If you want to get noticed on social media or anything , you’d either use one or all the above or some of “ Business tactics “ .
Like and Subscribe , you know what I’m talking about. That patronizing , demeaning , dumb down crap !

Does that mean those who DO NOT subscribe or like mean that your stuff SUCKS ?
Far from it. lol
Do you seriously need to be right there with the very person sweeting , biting your finger nails , and nervously shaking with anxiety regarding what people think ?
Of course not.

WHAT IS THIS SAYING ABOUT YOUR SELF WORTH ?

If you check out personality type science , you can very well see that there’s no difference between who’s famous and who isn’t.

Let me tell you something about popularity , it’s the same with fame.
In my childhood there was shows that were popular and those that weren’t in my time.
I tend to love stuff that I can relate to that not everyone cares for.

So what about the stuff I like ? The stuff I was influenced by ?
Why do they get more views then I do ?

Well I ain’t going to pout and have a toddler tantrum . And I’m not going to say that what I do isn’t very good.

If those same artists were to work without much of a budget like they did before they had much of a budget and if they were to start all over again but using social media ,
they’d be exactly where I am.

People would sacrifice tons of their hard earned money for their views , using
keywords , SEO , hashtags , Google Adsense , Facebook and YouTube advertising and all that junk.

And the point of the panel was that artists that are inspired by their pop culture favorites can
totally do that more than ever thanks to affordable technology.

Sure it’s not the millions that the mainstream Hollywood Entertainment Industry uses
but we are becoming that much closer in terms of competing with them.

But here’s the truth and realization that I’m coming to.

And this is the very reason why I never seem to shut up talking about the importance of 5D Earth , MBTI Myers Briggs Personality Type Science and a Libertarian Socialist Anarchist Free Society .

Your fans are kind of like meeting friends , they connect with what you got to say
because you share the same interests.

If those famous accomplished artists weren’t so busy trying to make a living ,
perhaps they either like to do the same with you or perhaps exit the entertainment arts all together just to get away from it all because they might feel that it took their whole entire life away.

Let me raise a question.
If capitalism was gone , if we didn’t need to work to meet our human needs if it’s earning money doing what what we love doing or not.

If we had absolute freedom to do what we only loved to do ,
what would we do ?

And as for audience building ,
what if you could reach to ALL people that shares the same interests of you and what you do ,
AND ….
It isn’t in the millions.
Maybe it’s only a few.

Tell me , what matters best to you ?

Or looking for love outside of your own self ?

I’m for my like minded people and love doing what I love doing.

Just throw away the labels of hobby and making what you love doing seem so small.

It’s time to question the world around us.

A New World and Better Life is Possible !

Posted by Erica Crooks at 8:43 AM No comments: