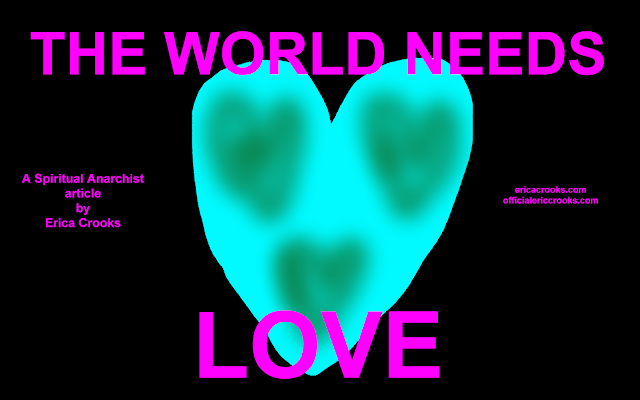 I know , thinking about what you want instead of what you don’t want in order to manifest Law of Attraction .
As an Anarchist , I understand why we are all very angry being slaved by hierarchy globally .

But if I think of myself NOT on Planet Earth , and I take a huge big view on the world as a whole and see the whole entire picture , it’s that most people are not fully happy with their lives.

But there’s something about love and security and self confidence and that is , it’s peace that comes from within.

Sometimes we need to take a step back and even forgive the world in our hearts.

Those on the top of the hierarchical pyramid , the ruling class ,
All they have is material prosperity .
All they have is the power to control others.
That’s all they have.
Do they know just how powerful the power of love truly is ? The spiritual power of venerability and tenderness which a baby has for their mother and how cats must feel in a comfortable home ?
Perhaps those who have mastered the Law of Attraction.

I think we all want the best for everyone. Also it’s not easy when you live a life filled with toxic people from the aggressive to the submissive and co-dependent.
And of course it’s this hierarchical system to blame.

Spirituality to me is not just individual self-concern but collective self concern as well.

Anarchism and 5D Earth is so simple because most people just need to unite against hate and fear of hierarchical powers and say ( We are all fine governing ourselves , and your hierarchical services are no longer needed anymore ! We do not want you to have power over us ! )

The problem is that there are many people in this world that refuse to cooperate .
Perhaps your awaken to the truth that “ Love is the Answer “ but there’s many who refuse to accept this. They will deny it’s truth with such aggression or even depressing naysaying .

I kind of feel like the role of therapist in a way because it does seem like these sort need it but not the typical ones who want them to conform to the status quo and give them pills .
But perhaps to open up their hearts to let them now that it’s ok.

Perhaps we are all scared , perhaps we are all angry , perhaps we are all frustrated.
The Good people are scared and angry and frustrated at the aggressive ones with hierarchical powers because they don’t care about us at all no matter how much we suffer because of their evil.
The submissive indifferent ones want to block both the truth and the power of love in their mind and feel much more better with their addictions and superficial social status.
While those hierarchical ones of power over others have their hate and fear and frustrations despite the fact that they have all the material possessions they could ever want , they have the power to blow up the world if they please , if they wanted a New World Order George Orwell 1984 kind of dystopia , they can bring it about as fast as a finger-snap ( or so ) .
But it’s like MAGA supporters , they have the president they want and yet they still are not happy and satisfied !
It’s because they live in fear and hate and frustrations.
So even those the good people have good reasons to feel upset , what about the others ?
The indifferent would rather be left alone in their safe space away from everyone , everywhere and everything out of the fear of being hurt.
Perhaps the same as the hierarchical powerful authority over us.
They live in hate and fear and they don’t take time to be self aware or even question why ?
It’s unconscious and that’s not very healthy. But they don’t care. They think addictions is the answer , they think controlling everyone and everywhere and everything is the answer , they think owning everything is the answer , they think addictions to num the psychological pain which came from their abusive authoritarian parents is the answer.

Love is the Answer.

Anarchists and Good people know this.
Perhaps our anger is a passionate one .

So what am I trying to say ?

With the frustrations of life , remember what your goals are.
Remember why you are fighting in the first place.
Remember the power of love and that life isn’t as hell as we think it is.

Love , Peace , Security comes from within.

Perhaps we can use Law of Attraction as a tool for our Spiritual journey bringing Heaven on Earth and not one or the other. :)