Internet Capitalism : Selling Out on YouTube and social media

Internet Capitalism : Selling Out on YouTube and social media 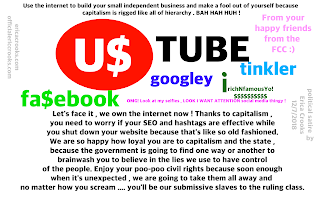 I have made a general blog post about internet capitalism https://www.youtube.com/watch?v=VIUpMNa1AcE and I may seem irritating for repeating myself , but one of the things that I’ve learned from Bob Proctor is the repetition of good ideas helps people remember it. Bob Proctor is a great intuitive and philosopher , too bad he’s a capitalist. Anyway…

Anyone ever read this article about YouTubers being burned out ?
https://www.polygon.com/2018/6/1/17413542/burnout-mental-health-awareness-youtube-elle-mills-el-rubius-bobby-burns-pewdiepie

And it’s not just them , but people want to make a career out of what they do. And before I became an Anarchist in 2017 , I totally understand where they were coming from.
Even as a kid and teenager and young adult , my life dream for adulthood was to easily earn money doing what I love enjoying in my life. But of course when I became an anarchist , I soon realized that maybe it was contradictory . Here I was this leftist satirist knocking the piss out of dumb down television and the media , but perhaps I was an unsuccessful liberal leaning self employed artist at the time.

As an Anarchist , I strongly suggest for not only the creative community but everyone to do what they can even with their skills , abilities and talents to help make the world a better place.
http://anarchism.pageabode.com/afaq/index.html
( The Anarchist FAQ , I strongly recommend it ) .

I’m very glad that I’m not alone in this vision. And it’s freedom for everyone ! But since I am an artist , today I want to reach out to artists and creative content makers on the internet.

“ Under libertarian socialism, the state would be smashed, capital would be completely expropriated, and the commodification of liberty would come to an end. Workers would have full autonomy, free from the coercion of capitalism and the state. This would allow for a volcanic explosion of human creativity and artistry, reaching the absolute pinnacle of free expression and innovation. There would be street art, theatre, music, poetry, film, dance, and perhaps even forms of art we may only discover when our creative capacities are unlocked and expressed to the fullest extent, and they are no longer arbitrarily limited into whatever dreary and monotonous garbage is serviceable to power and capital. Art would no longer be a commodity, a tool for the ruling class to keep people passive, obedient and stupid by promoting a culture of control and domination, but instead it would actually be an outlet for people who have something to express! “ _ Libertarian Socialist Rants

What we are seeing with artists struggling on YouTube , on the internet , meaning ones who are independent and working outside the Hollywood system struggle to get by in terms of capitalism.

Even Troma Entertainment knows and Lloyd Kaufman tells people that the “ Word of Mouth “ of their fans is the reason why Troma still exists.

Even Troma / Lloyd Kaufman gave advice to help working class indie filmmakers succeed outside the Hollywood studio as best the can .
http://occupycannes.tumblr.com/#category/media-consolidation
Even in Lloyd Kaufman books / DVD series “ Make your own Damn movie “ series.

Lloyd Kaufman is a hilarious ENTP , a great activist for freedom of speech and expression in the arts , and this is the guy who gave Trey Parker & Matt Stone their first big break and own it too “ Cannibal the Musical “ .

I’m EVEN ON troma.com/link next to Cinemassacre ( Angry Video Game Nerd ) .
( I guess they didn’t put up the updated banner ) .

My short film “ When Aliens are Bored “ was shown at TromaDance 2016 .
https://www.youtube.com/watch?v=anLdEKWM4Og

Still they were uninterested in a distribution deal when I did whatever I could to talk with them from 2016 / 2017 . But whatever I’m an anarchist so it gives me a reason to continue being an artist as an adult. lol :)

But seriously , I see a pattern. Whenever someone becomes famous , THEY SELL OUT !
Hollywood knocks on their door and they get the opportunities that they can get.
And of course it’s tempting . And I don’t blame those who do it .

But what I am trying to say is , as long as the working class and the poor no matter how long and hard they work to get the equipment and things they need , we should be using it to it’s highest good before the government takes away all of our freedom and turning every single free country into a totalitarian one. Don’t think that your legal rights and the constitution will save you for a second. The only time I talk about my legal rights is when I fight off bigots since that’s a language professional jerks seem to understand like a religion or a cult that controls them.

Just remember what made the 1960s so great in the first place !
https://www.youtube.com/watch?v=otZL-EfgrG4
( lol Fritz the Cat as an Anarchist ! )
I must tell the people
about the revolution!
Revolt! Revolt!
Revolt!
Revolt! Revolt!
Revolt,
you thick-skulled idiots!
You have carried heavy burdens
for the bosses!
You have sweat your lives away
for the bosses!
The bosses!
They ride around in limousines!
Bosses...they're eating
strawberries and cream ! Come the revolution,
there'll be no more limousines!
Come the revolution,
no more strawberries and cream !
There he is!
He's the one who keeps
the bosses in power! He's the one
who's holding you down!
The spiked Buddha Capitalism !
The iron thumb on the heads
of the proletariat!
WE SHALL OVERCOME ! “
_ Fritz The Cat ( created by Robert Crumb ( Crumb is a left wing Communist by the way )

And of course … John Lennon !
https://www.youtube.com/watch?v=sRq1mp4VArA

There was something very interesting that I read in the book “
The Simpsons: An Uncensored, Unauthorized History by John Ortved .

“ Gary Panter’s “Rozz Tox Manifesto,” published in the 1980s and influenced by Groening, was a post-Marxian theory of art, which rejected the idea of the artists working against the system. Instead, it encouraged artists to effect change by working within the capitalist environment, thereby attracting larger audiences to their causes. “Popular media are bigger than fine art media. Aesthetic mediums must infiltrate popular mediums. We are building a business-based art movement. This is not new. Admitting it is,” reads Item 10. “Capitalism good or ill is the river in which we sink or swim and stocks the supermarket,” the essay concludes.

I haven’t read “ Rozz Tox Manifesto “ but it does sound like a good read just from this section from this Simpsons documentary book alone . However , most satirical artists already done it this way. Perhaps all the well known ones did.

And of course the 1960s movement even though just like independent films , independent music labels seemed at least almost equal to their capitalist competitors .
Today pop music , movies and television isn’t like that so much anymore.
Public Access Television is filled with patriots , local community nationalists and special interest programing.
And the underground arts turned into this liberal community arts thing. Sure they are open to stuff , I had an art gallery in 2016. https://www.facebook.com/officialericcrooks/photos/a.702542416513146/1146066842160699/?type=3&theater

And even a couple of film screenings however they not so successful.

The way how I’ve gone about doing it thanks to the technology of today is do what you can do with whatever you got.

And I forgot to mention about the panel I did at Rhode Island Comic Con in 2015.
https://www.youtube.com/watch?v=hxOQrWq-68A

I think the problem is , most people are not aware of Anarchism and for me I believe this indicates practically every single political issue we have in the world.
It’s just in the matter of people being aware and doing whatever they can.

If anarchism was mixed in with what the 1960s could have been , we’d have a global high-tech
Version of The Spanish Civil War of 1936 - 1939 ! Hopefully more 5D Earth and Anarcho-Communism in my opinion.

https://www.youtube.com/watch?v=gdE04yrUIg8 Jerry Rubin of The Yippies

And remember this coming holiday season , do whatever you can.
“ WAR IS OVER ( if you want it )
http://imaginepeace.com/warisover/