The overwhelming side to puppetry and animation filmmaking 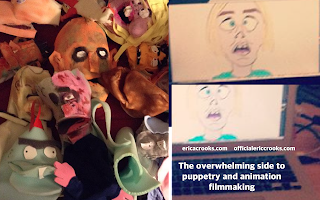 The overwhelming side to
puppetry and animation
filmmaking

I’m not exactly sure how to begin this blog post. But it’s something that came to my mind this evening as I little by little unpacking and organizing things in my new apartment.
As I now relax and take it easy this evening in my new apartment , I think about a little bit about my previous apartment. For those who don’t already know this , I was living out of my mother’s bedroom as a temporary apartment ( me and my mother live in the same neighborhood ) because I was being bullied by transphobic middle aged men in my neighborhood and no one really did anything about it so the only solution was to let the landlords know that I’d like another apartment which I did feel pushed out of my other one which I was at since 2010.
So it’s a relief to have an apartment again , even though my own mother is my next-door neighbor ironically. lol , still this 30 year old wants to live an independent life even though my mom still acts like a mom.
But that’s not exactly what I wanted to talk about in this blog post ,
The other thing I wanted to mention was when I rebuilt my puppets for The Erica Crooks Show again from 2013 / 2014 - 2016 .
And I think I mentioned this in my somewhat recent behind the scenes blog videos where I mention that I work out of my own apartment . It’s one thing if you have a little home office.
It’s another when you turn it into a puppet film studio and workshop.
Not only was the show funded out of my own personal money , but many times I would work late nights and crash into bed with barely any sleep at all.
Also I had the bad habit of not really cleaning after myself after filming because I was so exhausted . In a recent video I did showing how I go about building my puppets , I mentioned my awareness that the puppets are cheaply built which I like to compare my puppets to crash-test dummies . However the best puppet builders know that when you build a puppet , you want to make sure that they will last because puppets do wear out.
The Muppets did this all the time , they kept rebuilding current characters as well as new ones.
And since we live in a hierarchical capitalist society , yes things cost money.
And many times I felt like a single parent raising many kids ( my puppets ).
So as you can already tell , this may not be a normal average person living in an apartment.
Sure it was fun but at the same time it was overwhelming probably due to social media.
Social Media encourages people who create online content not only quality content but quantity but sometimes there’s people who put out quantity over quality.
I tried to do my best to deliver both but I know I’m not the only one to feel the “ Burn-out “ .
Even the biggest YouTube stars get burned out .
I still remember when I had a public access television show which of course was The Erica Crooks Show from 2006 - Spring 2009 , I filmed the show like an independent mini-movie technically making my own television program out of my own room or the basement of my abusive father’s house ( usually when he was asleep or not home ) .
And since I did video editing and things , This was No simple public access TV show , I was doing my best to make a quality comedy show with a shoe string budget.
And the show went from once a week , to every other week , to bi-weekly , to once a month , to bi-monthly , etc. And I think even doing online stuff I tend to fall into the same trap the more quality I load into something.
Hollywood has got all the money and only a lucky few get in if at all , one moment someone would be part of a show loved my many and the next they end up trying to make the bills even with their comic con career.
Now back to my apartment situation , it’s often difficult to record sound and I’m just lucky no one ever complained about me being too loud. Lol
I’m thankful for the work I got done from 2013 - 2016.

However I did have a thought that came to my mind many times in recent months.
Just how many people are trying to imitate the 30 minute half hour television show format and doing it in their videos as a one person show ?
And if doing this format with a sketch comedy show featuring over 100 puppets is challenging and a lot of hard work , try doing the South Park challenge by trying to make a 30 minute animated comedy show within 6 days however unlike South Park , you do it by yourself. That’s even more insane.

Noticed how my Halloween comedy special ended up being 1 minute long ? And also I had a planned Halloween special in 2014 that eventually got abandon.

The Ask Dr LeBrick Halloween Special was probably the fastest I ever came to doing anything relating to making a movie by myself with the exception of doing my show of course.
The fun thing about that special as well as The Ask Dr LeBrick Holiday Special was about 99% of it all was improv and adding stuff through editing and things like that.
It was so wild , creative and fun to do no matter how low brow.
And it kind of brought me back to my roots before my show became more and more of a satirical comedy show then the silly comedy show that made no sense like it was when I started going on 20 years ago.

Here’s the thing about television , it’s pretty much as good as dead unless someone was doing something necessary . Because when puppets and cartoon animation is made for television , technically it’s filmmaking.

The differences between what’s available to us within the last 20 years ( which is pretty much as old as the internet itself ) is that filmmaking equipment has became more advanced and affordable while before if you weren’t in the mainstream you couldn’t do it.

However like I said due to capitalism , it’s hard to resemble anything with the same quality unless of course someone successfully fundraises it with something on the lines of Kickstarter , indigogo , Patreon , or some form of online crowdfunding .

It’s just that even though it may look easy , it’s really a lot of hard work and effort that goes into what I do . Also a lot of time to make too.

When I was in my 20s and even younger , I had so much more energy than I have now at age 30. And I know it might sound silly and perhaps I’m sounding older then I am , but again what I was trying to achieve was making my own television show and I did achieve that even though at times it was hit or miss.

I love the work that I’ve done and still love to do it , although brainstorming many possibilities of trying new things and formats out is a good idea. There’s a saying “ Quality over Quantity “ which sounds like a good idea , however it takes forever and I loose my concentration and it might get abandoned if I’m too bored. That’s why when I do something such as The Ask Dr LeBrick specials , I would constantly add more new ideas and creative stuff into it so I would still have interest in completing the project.

There’s so much freedom in what I do which makes it so much fun to do , however sometimes I write down so many ideas that a lot of them need to be thought into consideration before I decided to go and create a new project without abandoning it.

I think the life lesson that I’ve learned within the past 3 years was to take better care of myself and take breaks when I need them. And sometimes that can be hard to do because I would work in huge bursts of energy and then burn out , and then I get the second wind after having thoughts of quitting for awhile and the whole cycle happens again.

I think the most important aspect in what I do is to remember why I do what I do. Because if it ain’t fun , why do it ? And sometimes when taking breaks I get re-energized and re-inspired.
Also it good to plan stuff instead of doing a life balancing / juggling act where one works on a new film project while things in the personal life get in the way.

One of the things that I’ve been doing since the 2017 Season of my show was not to go into production all year round and take the rest of the year off if I feel like I need time to re-charge and stuff . But even making shows in bulk like I was trying to do didn’t work out for me exactly.

It’s interesting because if you look at how certain television shows are made now a days , many shows take on that filmmaking format and like movies , some are made in the matter of months while others take longer. But one person does everything independently outside the Hollywood system , perhaps it depends on what they do , but perhaps it would take longer.

As an anarchist , I strongly feel that art in such a free society such as an anarchist society / 5D Earth because without the worry about money , artists will have the maximum unlimited freedom to do what they want to do as well as meet like minded artists that won’t screw them over.

So in conclusion , when you set your body , mind and soul into something , perhaps an indicator of if something you do is meant to be , perhaps see if you fall into such a loop that I go into. lol