Attention Spiritual Anarchists , we have enemies : Spirituality Solidarity against FASCISM

Attention Spiritual Anarchists , we have enemies : Spirituality Solidarity against FASCISM 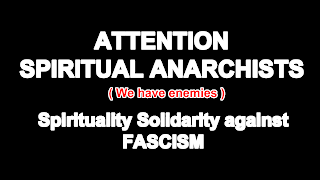 It’s so secret to know that most Anarchists / Leftists are atheists. They see religion and spirituality as the same thing, just another hierarchical tool of the ruling classes to keep people obedient and ignorant. There is truth to that of course, however it’s good to keep in mind that Religious and Spiritual Anarchists do indeed exist. I would say that Religious & Spiritual Anarchists take the hierarchical aspects such as hate out of it, and when someone does that, there’s meaningful value in it if you believe religion / spirituality as philosophy or even paranormal as well. Perhaps the same can be said with liberal and even leftist religious / spiritual people. However in my blogs / vlogs video blogs / etc I do criticize certain liberal spirituality practices , especially in New Age / New Thought Spirituality ( which is what I believe ) because there are many people who would lie about being liberal or left leaning, they believe in capitalism so they literally exploit and scam people regardless of how much knowledge they have in a particular spiritual area for however they want. For example, someone can sell a 30 minute spiritual guided meditation that would help you with your Law of Attraction Manifestation and even your Twin Flame Union / Twin Flame Reunion and all it would cost you is $50 - $500.00 ( or more ) . As a Transgender Woman who supports my fellow LGBTQ+ people and as an Anarchist, humanity as a whole , I am against Hate Speech and using Spirituality as a platform for the Narcissistic Ego , Capitalism or even to promote Hate & Fear filled ideologies. I remember seeing one of those psychic places which someone runs out of their own home or renting out an office building, the very kind that friends and family would always say to stay away. Perhaps more so if they have a “VOTE FOR TRUMP “ banner in their yard or bumper sticker on their car. But that’s just the beginning of what looks like a true Spiritual Warfare to the point of asking ANTIFA ( Anti-Fascist / Anti-Fascism ) Spiritual people to stand their ground and defend. Believe it or not, there is unfortunately Alt-Right Fascists & Hateful Bullies in our Spiritual Communities, it goes beyond Spiritual Narcissism. I have mentioned before about the problem of New Age Politics as well as how New Thought / New Agers who believe in The New World Order Conspiracy Theories / Illuminati which I strongly feel that Anarchism gives more detail to which NWO Conspiracy Theories tend to lack. Does the Ruling Class wear cloak robes and worship the evil malevolent dark entity powers of Satan / Lucifer / The Devil or whatever Hate & Fear negative energy to poison the soul into Ego ? I’m not sure, but there’s Spiritual Alt-Right Fascists that might do exactly that. Even though I’m a Spiritual Anarchist who’s for New Thought / New Age Spirituality, I do not strongly feel that Spiritual Anarchism is only limited to New Thought / New Age Spirituality as an Anarchist. There are Religious Anarchists just as much as there are liberals and leftists that believe in and are Christians, Jewish , Muslims / Islam , Hindu , etc As long as we have solidarity and are against hate and have such positive common ground, we can live in a world of peace and acceptance of religion and spirituality. Besides, I think New Thought / New Age Spirituality borrows from them all just as much as how Anarchism is influenced by other Leftists ( Socialism , Communism, Libertarian, etc ) so no wonder why many Anarchists are all for Libertarian Socialism / Anarcho-Communism. And I think that relates to Spirituality & Anarchism , even Spiritual Anarchism which is solidarity and positive influence. There might as well be Religious & Spiritual Anti-Fascists / Anti-Authoritarians too because The Left has the truth . So when it comes to Spiritual Anarchism solidarity, as I mentioned regarding Religious Anarchists , the same should be said with other Religious / Spiritual Leftists ( perhaps liberals just as long as it’s not contradictory to Anarchist and shared principles ) . Pagan & Wiccan Anarchists for example , perhaps even Satanist Anarchists just as long as not referring to Hierarchy / Hierarchical Power / Hate & Fear ideology which Satan tends to be referred to however Satanists have claimed that there’s a difference between their practice which is about liberation which is different from the Satanic Abuse / Spiritual Abuse / Religious Abuse and Terrorism which people falsely identify as Satanists which are perhaps more Devil Worshippers. So there are Satanists that debate those who use Satanism as an excuse for antisocial crime , rape , murder , and just plain evil. It’s most certainly a debate of it’s own. Who are the good people vs who are those who use hierarchical power over others. According to Anarchist principles , hierarchical power over others is forbidden. I’ve read that Anarchists tend to side more with Socialism / Leftism more than they would Liberals despite how Liberals tend to be looked at as being left wing or leftists due to it’s mass popularity, still liberalism like conservatism and any hierarchical ideology has roots with Ruling Class doctrine.

So sometimes such Anarchist solidarity with other leftists can seem contradictory, but I believe it’s really on the lines of shared principles in the here and now.

I encourage anyone who’s spiritual if your a New Ager, Pagan / Wiccan / Religious / etc to call out and perhaps if your willing, deplatform the hate that’s poisoning our Spiritual and even Religious Leftist Communities. From Capitalists to Alt-Right Fascists , it doesn’t matter if they claim to be a Christian, A Pagan / Wiccan , etc , for those who promote and preach HATE SPEECH , they are asking for trouble ! I’m talking on a level of political philosophy, as we Anarchists / Leftists know, we have The Ruling Class’s hierarchical systems and so forth dominating our lives non-stop until revolution however that turns out to be ( I still hope for a peaceful one. ) . Alt-Right Fascists like those in power who claim to be Liberal / Democrat steal from Leftists / Anarchists and use it to benefit them for hierarchical aims, means and ends.

So if your a Pagan / Wiccan and you see Alt-Right Pagan or Alt-Right Wiccan Fascism , you know they are not only promoting HATE & FEAR ideology which they are brainwashed in addition of Toxic Masculinity Patriarchal ideology but also HATE SPEECH which could influence people to poison and destroy your spirituality into a Hate Group, and it is wise to make sure other Pagans / Wiccans to be aware of this. There are many who are and do recognize this. I hope the same can be said with New Agers / Lightworkers / Empaths / etc if it’s a Spiritual Narcissist who is cashing in or using it as a platform for Hate & Fear ideology and Hate Speech , THEY MUST BE DEPLATFORMED ! Creating petitions and working within the system can take forever and may not work in your favor, but using direct action in however way you can does HELP ! ANTIFA ( Anti-Fascists ) know that this isn’t some liberal Cancel Culture , this is all critical thinking to deplatforming Hate Speech. Hate Speech ( regardless of what J.K. Rolling has to say ) is NOT FREE SPEECH , it’s a form of “ Word of Mouth “ that literally brainwashes people into accepting Hate & Fear violence as the norm, and yes, you heard me right, I said violence, because violence is the end game. Hierarchy is a scam. Toxic Masculinity is a scam. Alt-Right Fascism is a scam. The Ruling Class NEVER EVER CARES ABOUT THE MASSES ! They lie to them, they exploit them, and it’s only until we have “ Unity Consciousness “ and Mass Awakening to THIS TRUTH of Unconditional Love & Light that we can live in a better world that we are living right now because of hierarchy. Another World Is Possible, Peace on Earth is possible, A Heaven on Earth is possible, perhaps an Anarchist Society & 5D Earth is possible. We are born to Love, but taught to Hate & Fear.

Perhaps we could use our Spiritual practices like Law of Attraction for example, but what I want to say is that it’s good to use both that and direct action instead of being sucked into “ Spiritual Bypassing “ which is hierarchical and causes people to shut off their intuition , empathy & sympathy which souls need and it’s a part of the true nature of the soul.

As I stated before, we can not allow Capitalism and Narcissism to turn Spirituality into a Hate & Fear cult, the same goes with politicians as well as Alt-Right fascists. There’s two revolutions going on, the one within ( Mind, Body & Soul ) and the one that requires Unity Consciousness and the end of Hate & Fear once and for all. It’s up to us to save Spirituality from becoming a commodity, or a hate & fear driven cult, or a negative energy force for EGO and EVIL !

It’s up to us. The World Needs Love, But We Live In a World of Hate & Fear. Lightworkers are here for a reason. _ Erica

Read this article on

Posted by Erica Crooks at 11:44 PM No comments: