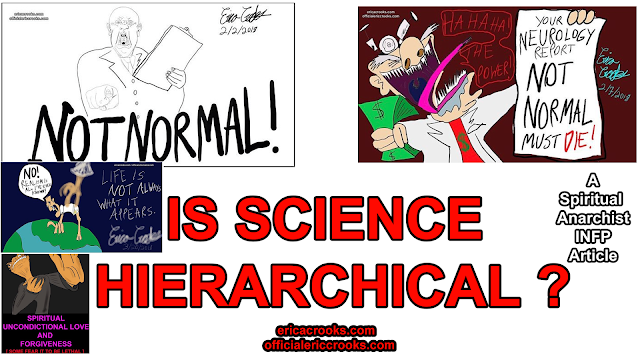 As I was researching the question if evil can be cured. With all my research of personality disorders , all the sorts of therapies …
Behavior therapy , rehabilitation , Clinical Psychology. Psychotherapy , Neurology…
And I’d like to refer back to a previous blog article
https://officialericcrooks.blogspot.com/2019/07/spiritual-anarchism-anarchism-vs-new.html

Perhaps I’m just getting back into spirituality because what is science anyway ?

According to Google definition results

Science Is “ the intellectual ( says who ? ) and practical
( of or concerned with the actual doing or use of something rather than with theory and ideas. (of an idea, plan, or method) likely to succeed or be effective in real circumstances; feasible. )
activity encompassing the systematic ( sounds hierarchical ) study of the structure ( oh yeah ) and behavior of the physical and natural world through observation and experiment.

Real
( actually existing as a thing or occurring in fact; not imagined or supposed.
(of a substance or thing) not imitation or artificial; genuine. )

Before I go on with my rant to say F**K Science and realism , let me tell you where I’m coming from.

What about Love ? WHAT IS THE DEFINITION OF LOVE ? ( Before I say you can take your “ pseudo “ remarks AND SHOVE IT ! )

Love : an intense feeling of deep affection. , a great interest and pleasure in something. feel a deep romantic or sexual attachment to (someone).

Feeling
an emotional state or reaction.
a belief, especially a vague or irrational one. ( interesting JUDGEMENT )

Emotion
a natural instinctive state of mind deriving from one's circumstances, mood, or relationships with others.

What did we learn from the story “ Frankenstien “ ? You can put a body together , but love is a mystery and if you deny it , it turns to the ego .. evil .. “

So that in a sense , love is the answer .  AND SCIENCE CAN NOT PROVE EVERYTHING !

If you rely everything on science , you reject the true mysteries of life.
As mentioned in The Secret , there can be someone DYING in the hospital bed , their body is so damaged , doctors can say that it’s impossible. This person is going to die and there’s nothing we can do about it. What if these doctors don’t believe in miracles , coincidences , the strange positive ironies of life….
Suddenly the will of this person will breath and with this spirit , the body CURES ITSELF !

Why are there things that can not be explained by science ? You ask them , the narcissists who think they are the smartest and most intelligent people in the world , they will just shrug and say “ because it is not real  , can’t be proven by science. “

This person’s name is Quinton ( INTJ ) . He’s made three known websites Slayerment / TruthControl and CrowdFreedom . He’s an Anarchy-Capitalist ( Not real Anarchist ) / Right Wing Libertarian . Most for the stuff that he has said has made people very angry and isn’t very true at all.

In one video he talks about the smartest MBTI type . https://www.youtube.com/watch?v=86s1wXYQAnw
In the beginning he says it’s the INTJ jokingly because that is his type. He says the top ones are INTP / INTJ then INFP ( mine ) and INFJ .

He does believe that Thinker types are smarter than Feelers because Animals feel but don’t listen to reason ( his opinion ) , HOWEVER he does admit perhaps he might be wrong. His website TruthControl mentions spirituality and he has also mentioned his interests in The Law of Attraction and Abraham Hicks .

In another video ( which is how I discovered him a few years ago and I think is his best article / blog video ) iNtuitives vs Sensors ( iNtuitive Bias which is controversial in the MBTI Online Communities ) he has mentioned that iNtuitives are SMARTER than Sensors. https://www.youtube.com/watch?v=zba9jnEOQqw&t=3s
As an INFP I do believe that is true. As I read the Anarchist FAQ on how this hierarchical society shapes people and perhaps is responsible for the Extraverted Sensor catered Society GLOBALLY , it’s interesting to think about because it does sound true.

Quinton in the video talks about intelligence , the intelligence he refers to in this video is which types are most “ Influential “ .
I would have to say the Feelers are most influential but then again how do you measure MBTI ?

I believe those who side with hierarchy tend to be ST / TJ types while NP / F types are more chill.

If you’ve seen my work , you know I live in the land of imagination ( very typically INFP right ? ) . I do have a Twin Flame ( I think she’s ESFP , might be subject to change at Union ) , and I write blogs such as this.

I think 5D Earth perhaps will get rid of any last bit of hierarchies from non-friendly animals to any sort of scientific laws.

They say spiritually that the only thing that is real is the power of love.

And if emotions can be measured on an organ called a brain , you may call me stupid but to me I think that’s dumb. It kind of reminds me of the smart ass remark I wrote on my final Astrology ( science Astrology not REAL spiritual Zodiac Astrology which my High School teacher thought was crap ) test which was “ How do we know a solid answer about stuff in space if people haven’t been there themselves. “ Surprisingly I got a good grade … I think my teacher written a note how I refuse to answer any of the questions correctly however he admired my ability to think outside the box. This guy was funny , perhaps an ENTP , very wacky , the students loved him , but he committed suicide years after I graduated. Several short tribute websites were made in his memory.

So that’s my point , someone could be a master of science , AND STILL FEEL DEPRESSED AND COMMIT SUICIDE ! Perhaps a lack of love for oneself I suppose.

Is science completely useless ? I don’t think so. Anarcho-Transhumanism or some sort of Anarcho-Communist Science can solve all the worlds problems…

However , science is only useful for Earth Stuff. Spirit and Soul is NOT Earth Stuff. Perhaps there is life before birth and after death. Somethings can NOT be proven by science doesn’t mean it’s not real.
Love is the most powerful energy in the universe , and even that energy is so powerfully beautiful that it’s hard to put into words.