Can Satire Help Bring Peace ? ( I thinks it's possible ) 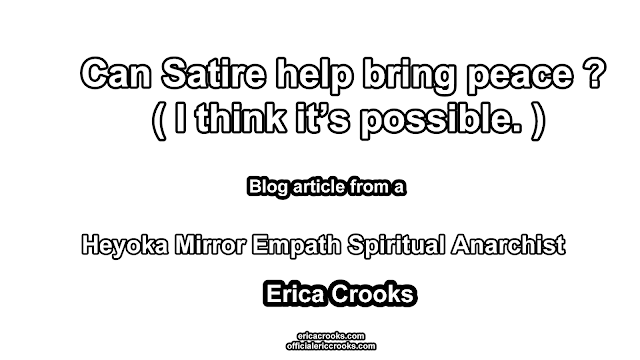 But I also identify as a Heyoka . A Heyoka is a mirror empath which term is most familiar with the native american spirituality and culture. Yes on my mother side I’m part French Canadian Native American. So wonder I love Dreamcatchers so much. :)
Anyway , Heyoka’s spirits are appreciated because they think outside the box , they come from a culture where criticism even if it’s harsh is appreciated with gratitude to help people’s personal and spiritual growth. Heyoka’s are known as the most powerful empath ever and perhaps are known as the satirists and even the “ Anarchists “ of spirituality.
The sacred clown as well.
Pretty sweet eh ?

Well you know how hierarchical society is. It’s a world that needs love but people live in hate and fear. The liberals are very sensitive to intellectualism and trigger warnings aren’t going to help and conservatives live in hate and fear and feel the most comfort in not only fascism but being capitalists ( illuminati ) ruling this world using hate and fear … consciously or unconsciously …. Yeah they need to go to a psychiatric hospital !

So if love is what people need , why won’t they accept it ? Perhaps realism is such an ego shell to protect people from hurt.

If your a lightworker and your doing the best you can to treat them with equality and peace and they just fire off negative stuff at you….
You need a good laugh.

Satire can help Anarchism build the new world in the shell of the old , Satire is deep spirituality because I know as a Twin Flame in Ascension working towards Union IT CAN HURT BIG TIME but we learn to get back on the ball of spiritual alignment and become better people going through it … yeah not in The Secret right ? Someone can mention Heyoka on their website but when they are faced with one… They don’t recognize one of their own. https://officialericcrooks.blogspot.com/2019/07/spiritual-anarchism-anarchism-vs-new.html

But perhaps it’s only funny to those who are awaken to the truth.

It’s like America has Mad Magazine and South Park .
The UK Had Spitting Image , Alternative Comedians ( Rik Mayall and The Young Ones / Hale & Pace / Monty Python’s Flying Circus ) and of course Ian Hislop ( Spitting Image / Have I Got News For You / Private Eye Magazine )
France has Charlie Hedbo and Les Guignols De L’info

Even my satirical works , it can either make someone laugh with me or make someone vomit.
Kind of like that time I had that film screening in Providence RI where someone walked out without asking for a refund.
https://www.youtube.com/watch?v=cEEixkzR4bg
This very complication of the best of my work which was technically edited to a PG / PG-13 level still SHOCKED people. This one person was like “ Oooohh That Erica Crooks , how disgusting ! For a Transgender Woman … I expected better from her ! “
The projectionist didn’t bother saying what he thought. Perhaps this guy who wouldn’t bother giving it a compliment pretty much didn’t like it. Ironically it was the same projectionist from my first screening in 2015. https://www.youtube.com/watch?v=6RhjrAvcT8I&list=PLJLbzpbdP5rkwzxjzTVhXiGZyfbOfDh25

When one is a satirist , the big aspect is you want to encourage people to think.

I feel in an Anarchist Society , things like this would be appreciated.
Perhaps perceptions of Spirituality if any who reject the idea might find something fascinating in the phenomenon wonder since their lives would be better under Anarchism , perhaps people might me open minded to it more like how Native Americans are about they Heyoka Empath.
https://officialericcrooks.blogspot.com/2019/07/spiritual-anarchism-anarchism-vs-new.html