Getting Away With It ( Adult Puppetry and Cartoon Animation ) 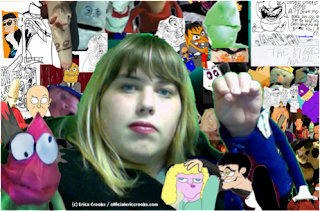 By March 1st pretty much will mark the 10th anniversary of perhaps my most controversial work to date which I called “ The Legacy Sketch “
https://www.youtube.com/watch?v=68HVRGO0Mlo
It was so controversial that 10 years later , I strongly felt I needed to give yet another
Explanation for my shenanigans .
https://www.youtube.com/watch?v=vEt8mAnwDbI
I have even written a book dedicated a huge chunk of it talking about the backlash I received.
https://www.officialericcrooks.com/adults-get-bullied-too.html
Long story short , Narcissistic parents and the police wanted it banned for good.
There was even people who watched my show on public access television who feared that I was going to commit suicide and mistaken the self parodied cartoon as a literal suicide threat.
How stupid ! The whole point was here I was this Transgender lesbian woman trapped in the closet out of fear that my authoritarian homophobic / transphobic father who owns a gun would take my life away. The sketch reflected my fears for the future , my depression of being trapped in the closet as well as complete and utter loneliness and frustration that after 4 years on public access television and the internet my brilliant puppet and cartoon work wasn’t being recognized. Ok so the use of the word “ Brilliant “ is just busting my Ego right there but still , here’s this 21 year old who’s serious about wanting to break into the entertainment industry.
That my friends was what I was feeling deep down in the core of my sinking soul.
Here’s my roast for my ever so happy-go-lucky 21st birthday , Tra-la-la with sarcasm and all.
I am in the pit of hell of misery and just yearn for like minded people , people who understand where I’m coming from , I just want to escape and be with like minded people or no one at all !
https://officialericcrooks.blogspot.com/2019/01/infp-blog-like-minded-people-or-be-alone.html

That’s the long story short , but the point I want to say regarding this very blog post is this !
IS ARTISTIC EXPRESSION and EXPRESSION THROUGH ART ?
Or am I just some marionette to please other people ?
Sure it’s fun to entertain through the arts , but sometimes satire isn’t funny.
Sometimes satire like a heyoka empath of Native spirituality / New Age spirituality
Is meant to shake up this world , give the ignorant a good hard slap in the face and well wake them up from their ignorance !
10 years later I’m very fortunate that Transgender people are recognized more than they were 10 years ago. Well then again , I lived a very isolated life as I have explained in my book.
https://www.officialericcrooks.com/adults-get-bullied-too.html

But that is just one example of what the arts can do. I tend to do puppet shows and cartooning and cartoon animation independent filmmaking for adults.
They say that it’s probably easier on a business model to do puppetry and cartoons for children. Well starting the summer of 2017 , I went from liberal entrepreneur starving artist to Libertarian Socialist Anarchism / Anarcho-Communism instantly which sides strongly with political satire and my lightworker mission then capitalism could ever do for me.
It was pretty much going back to my roots sort of speak.
And with the internet , someone could become successful and forget about the capitalist middle man of Google Adsense , Facebook ads and the like.
Still , popularity would probably most depend if you aim more at sensors I suppose.
Perhaps as an iNtuitive , I would side with Slayerment agreeing on this issue
https://www.youtube.com/watch?v=4UVTm3twlyQ
As relating to MBTI
https://www.slayerment.com/tags/mbti
So perhaps it’s slightly true.
https://www.slayerment.com/blog/ns-are-smarter-ss-mbti

BUT at the same time ,
Perhaps those who don’t complain about capitalism in the mainstream media as much as I do
Are perhaps the brainwashing product of hierarchy side effects.
http://anarchism.pageabode.com/afaq/index.html

Here’s a thing about me , I’m more for personal expression
Then just being all things to everyone.
https://www.facebook.com/notes/erica-crooks/the-truth-about-entertainment-/1654107041356674/
Even if the audience is just two other people who happen to be friends of mine.

Yes it is true that perhaps children are a lot more accepting of the imagination fictitious world of the puppets and cartoons where of course the adults would blame the artist if something offends them instead of doing their own inner shadow work and asking themselves “ Now why did that trigger me so much ? Is it relating to my dramatic childhood ? Or when my ex cheated on me in my bed as I walked in on them ? Does Trump remind me of my father ?
Perhaps I could possibly go further by saying there could be even a liberating spirit that puppetry and cartoons could express.
https://www.facebook.com/notes/erica-crooks/spiritual-philosophy-of-comedy-puppetry-and-comedy-animation-by-erica-crooks/1652948248139220/

I see puppetry and cartoon animation and even print comic cartoons as a mirror of human life .
I’m into New Thought / New Age Spirituality myself so I don’t think this is the only life that exists.
Perhaps fiction has it’s own universe.
https://www.youtube.com/watch?v=Z7ay9YX6KKE
( Yes I do side with Chuck Jones on the Space Jam issue , perhaps I should have linked to a clip from Who Framed Roger Rabbit. Still it’s better then that crappy Looney Tunes Show and Wabbit. You just can’t beat the original Golden Age of Animation classics.

As I probably already said regarding the political debating issue of Ben Garrison ( PUKE BAG )
This stuff is clearly left wing.
The more right wing people try to look popular if it’s Alex Jones or PragerU ,
The more pathetic they look by stealing left wing methods.
Besides , why aren’t they just going full sided fascists. They know violence is in their nature !
That’s why the Spanish Revolution from 1936 - 1939 ended.

So that in a sense , fiction isn’t that far from reality.
Perhaps it reflects more NP personality types ( MBTI ) than it does sensors.

So perhaps this all brings to mind regarding “ Getting Away With It “ ,
Do I just go WAY TO FAR to the point of bad taste within my art ?
https://www.youtube.com/user/officialericcrooks/videos

The thing about this art form is from how I see it , it’s a form of acting with all of these art forms and methods.
If I performed a disabled character as well as a psychotic social worker ,
Someone could immediately be outraged by that description alone !
To me this has absolutely nothing to do with a “ political correctness / political incorrectness “
Issue . I’m just artistically mirroring what actually happens in real life.
Isn’t that what art is suppose to do ?

That’s the problem with this world. Anti-intellectual philistines !
Conservatives hate it because it doesn’t reflect pro authoritarian / nationalistic / patriotic / capitalist ruling class best interests in keeping people in the status quo .
And liberals hate it because they don’t get satire , they don’t get literature ,
They aren’t mature ! Yes their values are in the right place.
But because they are so sensitive , they can give the left a bad name because they make up the majority.
The conservatives just think the left are a bunch of ignorant crybabies that won’t accept life being fair.

In other words , let me put it a different way.
There’s TWO kinds of John Lennon !

The John Lennon who simply gave up and just seeking for whatever peace he can have
And just being sadly and unfortunately brainwashed by conservatism .
THIS IS THE JOHN LENNON WE ALL WANT TO FORGET ABOUT !
Just like how all the greats feel into depression before passing away from Tex Avery working on  commercials instead of the MGM cartoons that made him famous to Jim Henson selling everything to The Walt Disney Company but passed away on the very week he was going to sign everything off to them.

Then there was the true Soul Devine John Lennon.
THE INFP John Lennon we know and love.

In conclusion , I feel everything I’m into is related .
Perhaps it’s human liberation.
I don’t know.
Perhaps I need to analyze it further.