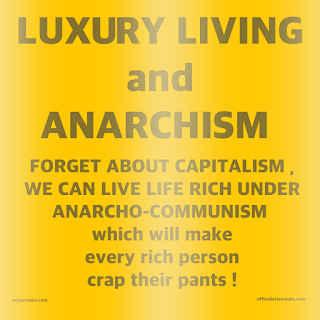 The Future of Luxury Living under Anarchism

Don’t worry this is not supporting anarcho-capitalism which isn’t even anarchism at all.

If you’re an average Joe or Jane or person , perhaps you only see Trump as this fascist bully who’s president of the United States of America. Perhaps you might have known that Trump was hated for many years before being President Chump as this rich glutton , how did he get rich ? Research the Trump Organization and prepared to be brainwashed into Luxury living.
Don’t worry , by no means is this a pro-Trump blogger and I already knew many people stop reading at this point. But putting all satire aside , let me talk about this some more.

Perhaps you might not know this about me but I’m actually a sucker when it comes to luxury anything. I see creative architectural beauty . In fact when I got into The Secret ( Law of Attraction / New Thought & New Age Spirituality ) , this was totally on my vision board.
“ If I were rich , what kind of a life would I live. “
So of course I read Bob Proctor , Joined the Bob Proctor Streaming Club and Six Minutes To Success and since I was a member , I was automatically a part of the referral program .
I didn’t think it was but I don’t know , is it a source of MSI ( Multiple Source of Income ) or just a get rich pyramid scheme ?
Just the idea that I was paying $200 a month from 2012 - 2013 / 2014 and
The idea if someone got into it , then I pay less so I can enjoy it more ,
Plus earn an income for my education !
I didn’t become an anarchist until 2017 ,
But I was always a leftist even if I was ignorant.
Besides , I sucked at business. Which as an anarchist now , I don’t regret.
I was an artist first and foremost , perhaps into philosophy which is what got me hooked in.
Bob Proctor is a great iNtuitive that’s into philosophy , New Thought Spirituality , and self esteem . It’s just capitalism is NOT how you get rich.
Bob Proctor has said “ It’s not about the money “ and “ you were born rich “ , which is true.
But when I became an anarchist , knowing that anarcho-communism is so rich , it would make every single wealthy person in the world crap themselves whatever their reaction may be.

So the question is this ,
Is it wrong for an anarchist to enjoy the beauty of luxury ?
I don’t think so.
The problem is not luxury , it’s capitalism.
Likewise I struggled to become a Vegan many times in my life and even today it’s just impossible.
Vegan food to me is absolutely disgusting.
And please don’t put a picture of a cute fuzzy animal in front of my face while I’m eating and scream at me with a megaphone saying “ FOOL , YOUR EATING THAT POOR DEFENSELESS CREATURE ! “
To me that’s not how to go about breaking the food chain.
I would be more than happy to become Vegan if Vegan food wasn’t absolutely disgusting and literally with no exaggeration at all “ MAKE ME SICK ! “

And it sounds to me like a high-tech Anarchism where anything with creativity and technology is possible and it’s right up my ally of interests.

Non-Compete has mentioned the subject of art and science in a video which I highly recommend fellow readers to watch.
https://www.youtube.com/watch?v=TKoiAXX6KFs

Also it can help fellow Transgender people too.

Perhaps they can invent the future of food where we don’t hurt animals and we get the tastes we desire and we never gain weight. lol
Sure there’s law of attraction too and the author of The Secret talks about it ( Book and Audiobook versions only , not in The Secret movie ) .

Anyway , in a similar way , I see a rich world , I vision a wealthy world for everyone when it comes to Anarcho-Communism .

Anytime you look up luxury living and high tech smart houses ,
Know that every person on this planet can have this without working their butt off , slaving 9-5 at some soulless job ,
It can exist but only with the help as many people as possible.
This is just one of the many reasons why I strongly support anarchism.

I strongly feel that anarchism knows a way to a better world ,
It just needs support from as many people as possible.

Most people complain about the same injustices and pains in life if you look at the whole big picture , but I feel anarchism has the answer.

Perhaps what stops people is fear.

It’s time to build the new world in the shell of the old.

For more info about anarchism check out The Anarchist FAQ