Suspect Everyone : Social Trust - where is it ? 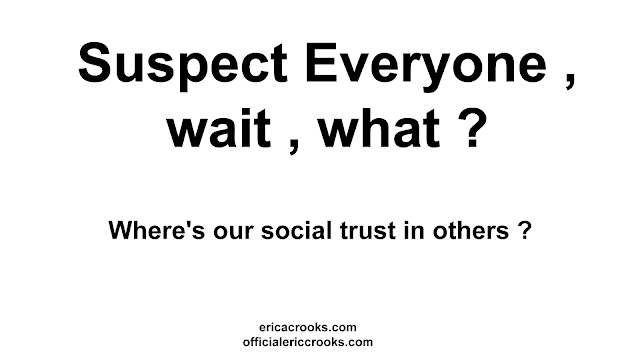 Suspect Everyone : Social Trust - where is it ?

As an introvert ( INFP ) , building a strong network of good friends haven’t always been my strong point. No it’s not that I’m a narcissist or some sort of self serving jerk or anything like that. Perhaps people just didn’t find me all that interesting or maybe there’s something about me that’s very irritating like me being a pop culture nerd and an idealist or something , go figure.

You know ( as I visualize myself offering you some coffee and I sit in my favorite comfy chair in a cliche fashion lol With my big ol’ Book Library behind me. Lol ) ,
It’s one of the many reasons why I’m an Anarchist.

One of the big problems in society is trust.
I got into MBTI ( Myers Briggs Personality Type science ) about 13 years ago and well through out 13 years and continuing actually , and since 2017 I’m a Libertarian Socialist Anarchist / Anarcho-Communist , and of course My Spiritual Awakening since I meet my Twin Flame face to face and well gained more Spiritual / Lightworker abilities and stuff like that …
( Deep breath ) the more I was able to find more and more information about something I was curious about since I was a teenager .

One of the problems is people fear what they do not understand.
We live in a world where people don’t want to be educated unless it’s going to benefit their survival needs aka earn money.
I could be cynical towards those kinds of people , but…
And maybe people just would rather have friends they meet at school / college or can help them get dates and better paying jobs or secure them from socialpaths….
YES folks , I hit a nail on the head there.

Almost like a submissive co-dependency .
But I won’t be cynical so put your mind at ease ( I’m saving my cynical ways for something that deserves it actually lol ) ,

I know what it’s like being an INFP living in an Extroverted Sensor society.
https://www.youtube.com/watch?v=QlkUHZNgthc

I even know what it’s like living with an abusive middle class authoritarian narcissistic father and a liberal mother who’s suffered through out all her life in poverty.
I’ve seen the worst of both worlds.
Yes I was a VERY ANGRY person until running away from my Father in 2009 and finding out I was diagnosed with PTSD . I was well aware that I can never ever allow myself to become an abusive monster like him , and why would I want to be . I was such a goodie-goodie doing pretty much ALL HIS CHORES for him and his wife LITERALLY FOLKS LITERALLY !
Why ? So I wouldn’t get abused and I am seen as loved and good.

Put it in different terms , WHO HASN’T FELT THE DARK EMOTIONS OF LIFE relating to betrayal , rejection and even suicidal tendencies ?

Did you know that people who hurt you are secretly hurt ? Maybe they are talented , maybe you would like to be friends with them , but you are not because THEY HAVE SUCH A BAD ATTITUDE AND THEY REALLY THINK YOU ARE ANNOYING AS HELL probably bombarding them or smothering them in someway….. ( record scratch )
Did you know that if someone doesn’t like you sometimes it’s “ NOT EVEN YOUR FAULT AND IT’S ACTUALLY THEIR PROBLEM AND NOT YOURS ? “
You know sometimes there’s people who just do not want any more friends right now .
Perhaps there’s a lot of stuff going on in their life that they prefer “ NOT TO TALK ABOUT IT ! “

They had enough of having their heartbroken , they had enough getting stabbed in the back by sociopaths controlling them with narcissistic supply.

So , how are we suppose to make friends ?

People just minimize their life with who they know locally with trusted referrals .

But what about the internet ?
Is the solution to suspect that people are even worse on the internet so you should always have a hard outer shell when dealing with people and look like a total douchebag ?

One of the tools in my survival in life has been to have a sense of humor. But there was always this lightworker aspect about me . Perhaps that’s why I’m also a satirist and in spiritual terms a Heyoka / Mirror Empath .

I know , I know , spot that one red flag and your intuition and push the person right away.

Here’s the thing about life ok ? It’s NOT about conforming to adulthood and looking normal.
It’s NOT about “ life is hard so suck it up “.

The truth about life is Love heals and Fear and Hate kills.
The truth about life is that those narcissists that broke your heart and betrayed your friendship and perhaps your toxic parents abused you in childhood ( It’s very common , you're not alone . ) …. THERE’S ONES THAT ARE EVEN WORSE !
Yes they could be violent to you and perhaps even KILL YOU and set everyone and everything you now and love on fire ….. BUT THERE’S ONES WHO ARE EVEN WORSE THEN THAT !

And this is one of the many reasons why I’m an Anarchist.

Anarchy does not mean chaos and destruction because chaos and destruction is the purpose of “ HIERARCHY “.
Anarchists believe that people can be self-govern and we do not need rulers , and the only rules there should exist is those for the best interests of humanity.
No I’m not talking about some sort of 5D Earth Conceal of Elders Unity or anything like that because 5D Earth’s unconditional love wouldn’t need any hierarchy at all.

Anarchists know that the hierarchical systems ( Government / Mainstream Media / Capitalism / Religion / etc ) are NOT a genius society norm structure where people can at least tolerate one another BUT to turn the masses into slaves and stupidly cause the end of planet earth as we know it.

And no it’s NOT a Conspiracy Theory , IT’S THE TRUTH you aren’t going to know until you know and become aware that you were lied to by powers over you.

Besides The New World Order / Illuminati kind of ripped off Anarchism as well as the idea of a counsel of Elders bringing Unity in 5D Earth.
Because both are quite hierarchical and authoritarian a little bit to say it the least , and Anarchists are against that.

But in the meantime I do study MBTI and yes there’s perfectly logical reasons why there are personality clashes.
Especially if you don’t like be very much for me having my head in the clouds , not being logical and real world. Well your loss. ;)

But in conclusion ,
There’s many red flags you can find if you did research on Narcissistic Supply , personality type and Anarchism.
Also perhaps learning about Law of Attraction might help you out. I know that I became a less bitter cynical person because of it. ( See what I tell you , I told you I was going to save it to the very end of the article didn’t I ? )
https://raiseyourvibrationtoday.com/2016/07/18/signs-mastering-the-law-of-attraction/

I invite you all to take a look at my social media and everything I have in it from links to articles to blog videos and even arts and entertainment. Because sometimes what we are really looking for is someone who can relate to us , someone who can understand us , a friendly reminder that you are not alone in this world.