Political Correctness is NOT the Problem

Political Correctness is NOT the Problem 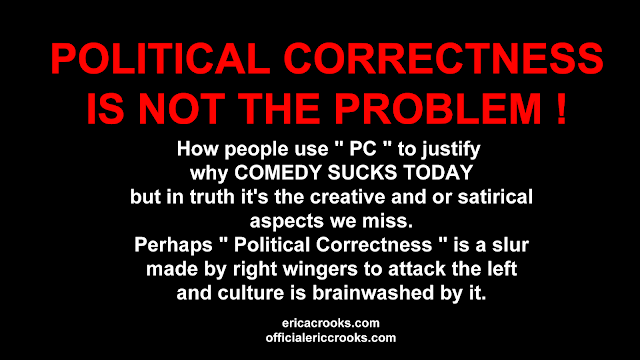 If there’s a phrase that is being used too much it’s probably Political Correctness.
Just like Social Justice Warrior , Special Snowflake , Butt-Hurt Crybaby , Identity Politics , etc.

To me the phrase “ Political Correctness “ sounds like it was invented by right wingers but unfortunately a lot of people use it . Including a hilarious book written by Sesame Street’s ( and a satirist in his own right ) Christopher Cerf’s “ Politically Correct Dictionary “.

Politically like the others “ Political Correctness “ is targeting “ Liberals “ . As one born in America it really does seem like if you are not a liberal ( Democrat voter ) or a conservative ( Republican ) then you only got one other option which is Libertarian ( Right-Wing Libertarian ) . The problem with right wing libertarians is that most are in fact conservatives like the fascist right wing propaganda fool that draws “ Ben Garrison “ who’s cartoons are not funny at all , he doesn’t even deserve the title of satirist / cartoonist in my opinion .

Sure there’s people who enjoy the classic Looney Tunes cartoons / Golden Age of Animation and I’m sure one of them. But whenever someone complains , anyone could just say “ It was a product of it’s time “ politely . And it’s true. Unfortunately not many people say it enough.
If it’s Blackface , Savage Natives or the man in a dress “ TRAP “ routine , if someone ever question the prejudices of old that are completely and utterly “ OUTDATED “ and a product of it’s time , the response is “ AHHH ! Shut up you Lousy Left ! Shut up about your political correctness. I bet you are a woman because only women complain about comedy. “

And that’s my point. If people keep using the “ Political Correctness “ phrase within their sentences , it’s reinforcing the very prejudice that right wingers have brainwashed people into justifying why comedy sucks today.

Political Correctness is not the problem. What you truly miss is the creativity in humor , you truly miss the satirical aspects within humor. Those are the ingredients you are looking for.
But here’s a question. What do you care for more ? The art form that is realistic to the human consciousness relating to the frustrations of the hierarchical global system which Anarchists which to get rid of , the very oppression which satirists spit against , or are you so attached to your love of your country being brainwashed into the lies of the ruling class ? Why just the image of setting your country’s flag on fire will make you go into a never ending nationalistic patriotic rant on how your so much superior than everyone else.

Saying that the good no longer exists because of whiny PC thugs , it proves that people never question the status quo , people don’t question the errors of language. Like why in Halloween asking for Candy door to door is called “ Trick or Treating “ when “ Trick “ is totally absent .
People don’t question ANYTHING ! Many have absolutely no idea that Gender Identity , Gender Expression and Sexual Orientation are three completely different things . Most people don’t even know what the hell cisgender is even though most ARE ! Which are people who were NOT born Transgender.

Furthermore , they have absolutely no idea about Government Imperialism . And when they hear one word of it , they block it out of their mind.

Most people avoid the negative truths of life like the plague and refuse to accept NEW ideas outside the box , they feel much more safer inside the box and being in denial of the fact perhaps ….. THEIR PARENTS WERE WRONG ABOUT STUFF !

Point I’m trying to make is this. Quit using Political Correctness as the excuse for ANYTHING !

I like to leave you with this video made by Thought Slime relating to the subject of
how political correctness is not the problem.
https://www.youtube.com/watch?v=J_jxwtUwOGg